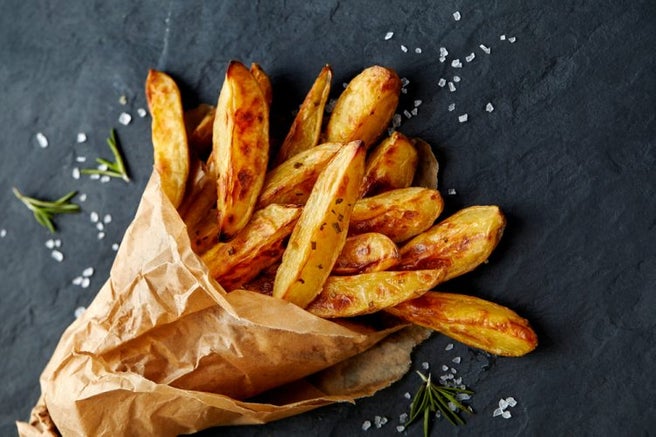 1.5 million of us would ask a total stranger for a chip. Photo: Supplied.

The research is in, and it confirms what we’ve all known, deep inside ourselves anyway: we go absolutely mad for a hot chip.

Two in five Australians say their mouth starts to water instantly when they smell hot chips, according to YouGov Galaxy research commissioned by Menulog Australia, and almost a quarter of us say hot chips are our favourite food smells.

The research also claims 1.5 million Australians have asked a total stranger for a chip after catching their scent, but not everyone is keen to share: one in 10 people said they’d “guard [their chips] with their life”.

The research — while baffling — is a fascinating insight into chip-driving behaviour: apparently, the reason why we’re so comfortable asking strangers for a hot chippy is because they’re linked to positive childhood memories.

“Smells can serve as powerful cues for memories, because the smell is directly linked to memory centres in our brain,” he said.

“Part of the reason Aussies love eating hot chips so much is because, for most of us, eating hot chips is a fun thing to do, and is usually associated with pleasant memories from childhood.”

You’d have to guess that the mouth-watering combination of carbs, salt and oil also has something to do with it.

“The craving kicks in because the smell reminds us that we need to eat, but it also reminds us, subconsciously, of the positive feeling that comes with eating this particular food,” Russell continued.

Women (44 percent) are more likely than men (39 percent) to report an instant mouth watering when smelling hot chips, but in unsurprisingly, men are “more shameless” when it comes to feeding those cravings, being twice as likely to ask a stranger for a hot chippy, and twice as likely to eat three at a time.

Baby Boomers — though they might hold tight on to their franking credits — are actually the most generous with their chippies. Half (50 percent) of them would share a delicious hot chip, compared to just 42 percent of both Millennials and Gen Xers.

As for the ‘perfect’ chip? Long and soft with just a little bit of seasoning came in as the best type of chip, but a close second was “anything with chicken salt”.

Source: More Than A Million Australians Have Asked A Stranger For A Chip

Will ‘Taste Memory’ Change the Way We Eat Post-Pandemic? | Yahoo

Our brain has not one, but five different memories! | ScoopCube

Smell is a potent wizard that transports you across thousands of miles and all the years you have lived.