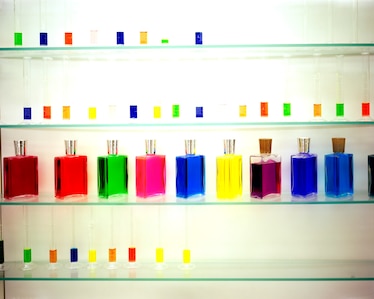 What’s that smell? It might just be the next big thing in travel | National Geographic

By msensory team03/01/2023No Comments
A dozen travelers gather around Martin Schaffner’s 16th-century painting “Christ in Limbo,” and take a deep breath. Thanks to hand-held scent diffusers these tourists are getting a whiff of smoke and sulfur to evoke the fiery gates of hell depicted in the Renaissance artwork.

It’s all part of a “Follow Your Nose” tour at Museum Ulm, in Germany. By pairing artworks depicting odorous things—flower gardens, a perfume ball, or a table full of food—with reconstructed scents, the cultural center hopes to further immerse patrons in its collection.

Scent is the only sense that is directly linked to the memory and emotional learning centers of the brain, says Rachel Herz, a neuroscientist at Brown University and an expert on the psychological science of smell.

“This makes the sense of smell really unique with respect to how we experience the world around us,” says Herz. “Our experience of scent is inherently emotional and visceral because of this neural organization.”

Though scents are powerful time machines, olfactory history has been largely overlooked. Experts are now pushing to preserve and protect smells as intangible pieces of cultural heritage—and inviting travelers to experience how complex odors can tell stories about forgotten places, traditions, and changing environments in nature.

Reconstructing scents from the past isn’t easy. To create the “Follow Your Nose” exhibit in 2022, Museum Ulm partnered with Odeuropa, a project that’s developing new methods—including artificial intelligence and sensory mining tools—to identify and preserve Europe’s heritage smells. The scents for the exhibit, produced by the perfumers at International Flavors and Fragrances (IFF), blend chemically authentic reconstructions of odors with oils and other materials that won’t harm the artworks.

“Museums are controlled environments, but they don’t always foster experiences that are as rich as life,” says Cecilia Bembibre, who leads Odeuropa’s work on olfactory heritage science. “This is a missed opportunity.”

Other exhibits are harnessing the power of scent. In 2022, the Louvre in Paris launched a new series of olfactory tours connected to its still life collection; Museo del Prado, in Madrid, debuted a scent exhibit inspired by Jan Brueghel’s paintings of “The Five Senses.”

A second-century A.D. marble statue of Aphrodite was part of the 2018 exhibit “The Countless Aspects of Beauty,” at the National Archaeological Museum in Athens, Greece. Nearby, visitors could sniff a carafe of rose-scented perfume inspired by the goddess. PHOTOGRAPH BY LOUISA GOULIAMAKI, AFP/GETTY IMAGES (LEFT) AND PHOTOGRAPH BY LOUISA GOULIMAKI, AFP/GETTY IMAGES (RIGHT)

“Smell can engage audiences that are not easy to engage through visual mediums,” says Bembibre. “[It could appeal] to the visually impaired or younger audiences who are looking for different experiences.”

(This ancient city is the perfume capital of India.)

Due to climate change, some scents—and the stories attached to them—are at risk of being lost, she says. Odeuropa researchers are addressing this challenge through an “encyclopedia of smell heritage” that will be published in 2023. They’re also working with UNESCO to create policies around protecting scents. Beyond Europe, Bembibre sees opportunities to safeguard scents in underrepresented communities, ensuring that this intangible layer of cultural heritage is preserved for future generations.

A walk through Amsterdam, the Netherlands, reveals a myriad of smells: the ever present stench of the canals, the mushroomy redolence of old books, and even a trace of fresh-off-the-griddle waffles. To further explore how scent connects the stories of class, gender, and the city’s colonial past, the Amsterdam Museum launched “City Sniffers: A Smell Tour of Amsterdam’s Ecohistory” in 2022. The self-guided tour, created in partnership with Odeuropa, includes a scratch-and-sniff map with various historical smells such as a perfumed pomander, a scented ball thought to ward off the plague.

(Meet the artist who managed to bottle the scent of a person.)

While olfactory associations have long been connected to our first impressions and memories of places, artist and lecturer Kate McLean is taking these connections one step further with a practice she calls “smellwalking.” McLean leads walking tours in different cities around the world, translating the scents participants experience into hand-drawn “smellscape” maps. In January, she’ll be sniffing and mapping the streets and sites of downtown Philadelphia, such as the Washington Square Park Fountain and the Liberty Bell.

“It’s about being present and saying ‘I am connected with the landscape through which I am currently moving,’” says McLean. “I hope that in the future, we can all better appreciate the depth and the complexity of what’s easy to dismiss in a single sniff.”

The hospitality industry has been using scent as a branding tool for over a decade, with hotel chains like Marriott, Sheraton, and Hilton pumping out signature fragrances through their HVAC systems, says Herz.

“Even when it’s completely noticeable, people tend to kind of miss it because we are so visual and scent is invisible,” she says. “This is something that makes our sense of smell seem like it’s not very important, but we’re experiencing it all the time.”

Hotels are also dabbling in scented experiences. At the Balmoral, in Edinburgh, guests can join a masterclass in bottled fragrance with the founder of Scotland’s first perfume house, Kingdom Scotland. At Borgo San Felice, in Tuscany, master perfumer Maria Candida Gentile leads olfactory workshops that focus on the scents around the vineyards: wet leaves, barrels filled with wine, and earthy notes of wood and damask rose.

Bartenders in the French Riviera are also using scent in innovative ways, taking a cue from winemakers. At Hotel Barrière Le Majestic Cannes, bar manager Emanuele Balestra operates an on-site laboratory, where he turns fragrant botanicals grown in the hotel’s gardens into complex tinctures to enhance the imbibing experience. He pours his drinks in special glasses with bent rims so drinkers get a nose full of scent with every sip.

“Shaken cocktails typically don’t have an explosion of smell like wine,” says Balestra. “The perfume amplifies the taste, and it becomes an extremely sensorial experience.”

Source: What’s that smell? It might just be the next big thing in travel.