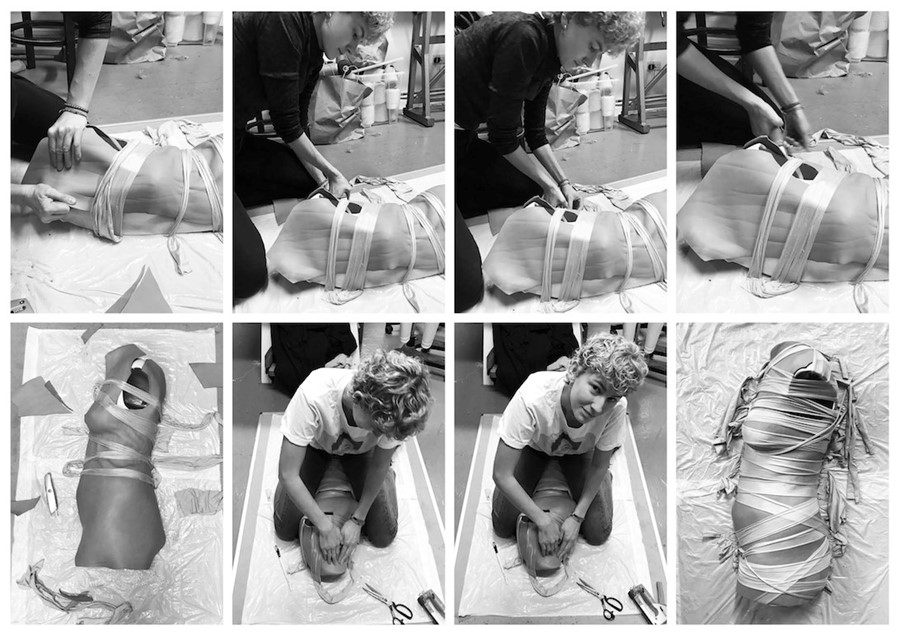 The feeling you get after sex, or at the end of a rave | Dazed Beauty

“I want to capture the moment of exhaustion after a climax – the sense of space that’s left when feelings settle.”

In TIMECAPSULE 7:32am (2019) scent designer Katharina Dubbick creates a room-filling installation with a scent distilled from her memories. It was produced in collaboration with Irish perfumer Meabh McCurtin in Paris and the chemical compound is distributed via steam into the nostrils to stimulate associations with sweat, saliva, cigarette smoke, sex, gin and tonic, latex, sticky skin and cleaning products. Casts of different bodies (a torso, underarm, belly and breast) are suspended in a mist, contributing to the heady mix of emotions in the air, which might feel something like the feeling you get after sex, or at the end of a rave.

Dubbick is an artist who studied at the Royal College of Art, but before that, she grew up in Germany and Sweden. She works with scent to conjure a multisensory experience. TIMECAPSULE 7:32am is a new piece that forms part of the show Pervilion at Silver Building, opening today in abandoned boiler rooms in Canning Town – an eerie space that is brought to life through the scent – “an olfactory cloud”. The installation will dispense two scent formulations through industrial diffusers, one focused on body odour, the other on industrial fluids, allowing the combination to drift uncontrollably over the course of the show.

Below, we talked to Dubbick about the installation and how, in a space filled with visceral smells, you’re asked to rethink why we use fragrance to cover up our natural scents, and why there is such thing as good and bad smells to begin with.

How did you start working with scent in your practice?
Katharina Dubbick: I have always been interested in scent. There are so many beautiful smells that we don’t pay attention to. The first smells I got excited about were just around me in my daily life. Especially the natural smell of my boyfriend. It is such a unique smell, it’s hard to put into words. I began to be interested in enhancing people’s body odour. A turning point was taking part in a competition to create a scent at the Royal College of Art, where I’m completing my MA in knitwear. I won first prize for my concept Soi-Meme: An Olfactory Self-Portrait and created the scent with the laboratories of International Flavors & Fragrances – a technical leap.

How does this relate to your wider practice and interests?
Katharina Dubbick: In my design, I look at how the body shapes a garment and how they interrelate. With scent, I try to reveal the body rather than cover it up. Often people mask themselves with commercial fragrance – perfume or deodorant – which makes us smell the same. I am interested in scent that enhances your own odour. It is about being true to yourself and being aware of the diversity of smells around us. There is no bad or good smell. Body odour is as unique as a fingerprint. It is tied to emotions. Anxiety sweat, for example, has a strong, heavy smell compared to sweat after working out – it expresses more than we might be able to say.

Tell me about the collaboration with perfumer Meabh McCurtin…
Katharina Dubbick: Scent can hint at emotions that can’t really be put into words; that said, our collaboration challenged me to articulate my feelings so that Meabh could identify the molecules. We started to build an archive of smell molecules that relate to body odour in order to create olfactory portraits. The archive was the basis for developing the scent for the new installation for Pervilion. Through dialogue, we got closer to pinpointing the chemical formulation of a particular memory. Meabh sends me an initial creation of the scent, and the discussion continues back and forth over the phone. I test it on the skin and through diffusers, to see how the scent reacts with the environment. I give feedback and then Meabh goes back to the lab to refine the scent in multiple stages. It takes time.

Why the ‘moment of exhaustion after a climax’?
Katharina Dubbick: Dorothy Feaver, the curator of Pervilion, invited me to visit a brutalist building in central London, Welbeck Street Car Park, just before it was demolished. The basement was originally used by a department store to store fur. There was an intense atmosphere. Disused space is a mystery in a city in which behaviour is so regulated. There’s a bittersweet sense of possibility. This silent, empty structure reminded me of raw, post-industrial spaces in Berlin, where raves happen. It made me think of a moment at an after-party, the double-sided nature of pleasure and depletion. I wanted to stimulate those sensations of pure abandonment. The sense of exhaustion after a climax.

Time Capsule 7.32am evokes the sensations of a rave, where thumping beats push our bodies to dance, break into a sweat and feel free, loosening the ties to our daily lives. When the night is over, dancers leave feeling happy but empty at the same time. It’s a mix of emotions that can’t quite be put into words. Scent is the best way to express it.

What’s in it?
Katharina Dubbick: The scent is formed in two parts, ‘Latex’ and ‘Human’. The notes include sweat, saliva, sex, gin and tonic, cigarette smoke, latex, smoke machine, sticky skin and cleaning products – there are more than 50 different molecules. The formula always stays secret to the perfumer. I’m diffusing it around a group of leather body fragments which suggest different bodies coming together.

What is the relationship between scent and sculpture?
Katharina Dubbick: Like sculpture, scent occupies space, but it is also a time-based medium. It mixes with other smells, changes and decays. It does not translate to the screen. It demands that you engage in the moment and pay attention to the environment, rather than blocking it out. I find it interesting to take smell out of context, from a moment at an after-party to the exhibition space. I’m intrigued to see how people respond. Some will relive a memory. Others will maybe just recognise elements.

As a group show how does this interact with the other works?
Katharina Dubbick: There’s a question throughout the Pervilion show – how does the body respond to the pressures of the built environment? My installation is closely related to a film which was also a response to the subterranean stockroom, a collaboration between director Stella Scott and Dorothy Feaver. The film is inspired by the writing on the walls left by workers. Stella’s camera connects the architectural skin with the surface of the body, performers rub against the walls until they disappear into mist. My leather cast of my sister’s torso appears in the final sequence, like a shed skin. That place is now gone, and you can experience the sensations of the aftermath by breathing in my scent in the boiler room installation. There’s an idea of transformation of physical states and the emotional effect. Steam, tears, sweat – these physical expressions are manifest in the scent, visualised in the film, and metaphorically at play in Jack O’Brien’s sculpture.

Source: This artist captures the scent of exhaustion after climax | Dazed Beauty