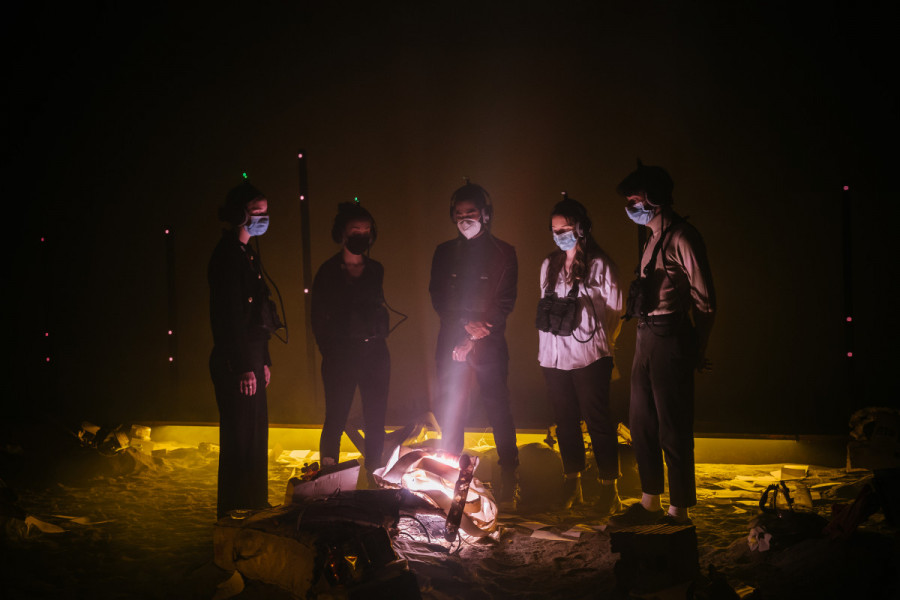 When I stepped into Ground Zero, I was immediately hit with the smell — it was a mix of ash, burning metal, and something else that New Yorkers have struggled to describe for years. But it wasn’t September 11, 2001. And when I looked around, no one else at the PHI Centre appeared to smell anything.

A lot of people say they’ll never forget the smell. I couldn’t relate until its dormant memory was triggered nearly 21 years later at Lashing Skies, an interactive experience based on Madeleine Monette’s book of poetry with the same name. Directed by multidisciplinary artist Brigitte Poupart, the exhibition aims to explore collective memories from disasters in recent history.

Staged with debris, personal artifacts, and remnants of disaster, the exhibition space portrays the lives of imagined survivors and victims of 9/11: a widow, a person in labour, a broken-hearted bachelor, a couple grappling with scenes of devastation. Through audio performances of selected poems from Monette’s book, visitors navigate a Ground Zero of the imagination.

Monette moved from Montreal to New York City in 1979 and has authored several fiction novels. Lashing Skies is Monette’s first book of poetry; it features 12 fictional stories, some of which are inspired by real accounts from Monette’s family, friends, and neighbours. She said the book’s first poem wasn’t written until six years after the tragedy.

“I never put myself in my books, but this is the closest I’ve been,” Monette said. “And it was extremely difficult to write.”

Monette said she was in her Soho apartment when she heard the first plane flying alarmingly close to the roof of her building. She and her husband looked outside their window for clues, but didn’t know what was going on until they turned on the local news channel, NY1.

Across the river in Brooklyn, NY1 was playing in the background as my mother prepared for work. When the screen cut to scenes of a burning North Tower, she ran to the roof and watched as a second plane flew into the other. Like thousands of New York parents, she immediately thought of her children and headed to collect my brother and I from school in Manhattan. I was so confident in my recollection of our 9/11 story that I wrote about it in vivid detail in my admissions letter to journalism school.

But it wasn’t until I stepped into Poupart’s 45-minute production of Lashing Skies that slumbering details began to stir. Seeing a woman’s leather shoe in the exhibition prompted me to call my mother that weekend, asking whether my memory that she was wearing house slippers that day was a delusion.

“This is the real immersive goal for me: to be part of something with [each person’s] own imagination.”— Brigitte Poupart

“I think so,” she said. “I don’t remember what I was wearing, I just remember running to get you two.” We spent some time arguing about which bridge we walked across to get home that day and what time it was. Neither of us could be sure our memories were accurate anymore, but we agreed that the gray cloud of smoke that hung over the city was a scene we’d both committed to memory. My mother and I disagree often, so if the show was meant to cultivate a collective memory of 9/11, then the call itself was the closest we’d get.

Before attending the exhibition, I considered that it might contain inaccuracies or portray the event inauthentically. Instead, I discovered that this entirely fictional exhibition about 9/11 was less about collective memories than it was about reviving our personal memories.

“This is the real immersive goal for me: to be part of something with [each person’s] own imagination,” Poupart said. She said her vision was to provoke individual memory and imagination through the intimacy of audio storytelling.

At the end of the show, visitors were invited to share where they were that morning on walls outside of the exhibition space. Many people recalled being in their car, school, home, or office. But some revealed experiences that are too often overlooked despite “Never Forget” being a widely recited tagline after 9/11.

“My parents were in NYC and got arrested because we are brown,” someone wrote on one wall.

“9/11 is the birthday of Islamophobia,” someone wrote on another.

While the stories from Lashing Skies were centered around a specific category of 9/11 victims in New York City, it’s clear that its audience was diverse. For many, the widespread Islamophobia that followed was itself a grotesque catastrophe to witness. Yet for many more, it remains a real and daily assault to peace.

Psychologists say memories are fragile and influenced by emotions. But the communal memories peddled in history classes are barely reliable. After all, entire populations have been cleansed and whole histories rewritten in textbooks.

So I left Lashing Skies with a reminder that it is precisely because our memories are our own—shaped by our backgrounds, communities, and lived experiences—that makes it a powerful antidote to the limited narratives told in historical tragedies.

“We must acquiesce to our experience and our gift to transform experience into meaning,” Patricia Hampl wrote in her 2002 essay ‘Memory and Imagination.’ “You tell me your story, I’ll tell you mine.”