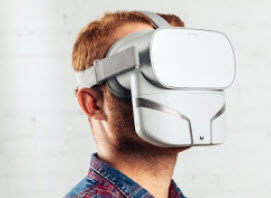 By msensory team20/12/2018No Comments
FEELREAL VR Mask is the world’s first Multi-Sensory VR mask that incorporates Olfactory Technology along with the ability to simulate tactile sensations to create a one-of-a-kind Virtual Reality experience.

Brooklyn, New York – December 19, 2018 – Feelreal, Inc., sent shockwaves through the world of Virtual Reality with the announcement of their impending release of the World’s First Multi-Sensory VR mask. This much anticipated announcement no doubt sets the stage for the team at Feelreal, Inc. to dominate this space.

There are VR enhancement devices, but none can offer the patented technology of the new FEELREAL VR Mask and the features it has been able to incorporate into one device. Industry experts have proclaimed that Feelreal’s new mask enables users to enjoy the most immersive VR experience on the planet.

Some of the standout features include: * Smells: Feelreal has developed a reliable scent generator that holds easily replaceable c cartridges with 9 individual aroma capsules. Users can choose and combine any of the 255 scents available in their store. All Feelreal aromas are exclusively designed by acclaimed perfumer, Olfactologist, and perfume critic Bogdan Zubchenko.

Imagine the depth of interaction when users can truly feel themselves on a racing track and actually smell burned rubber. Or being able to grasp the feeling of being on a battlefield complete with the intense gunpowder odor. This is what the multi-sensory virtual reality experience is all about.

Feelreal designed their ultimate Multi-Sensory VR Mask for use with a multitude of applications, such as:

The company reports that they will be announcing a Kickstarter Crowdfunding campaign to help bring Feelreal products to the next level. Virtual Reality enthusiasts can leave their email address on the website to be kept updated on the progress of the project and receive a substantial early bird discount when the Kickstarter campaign starts.