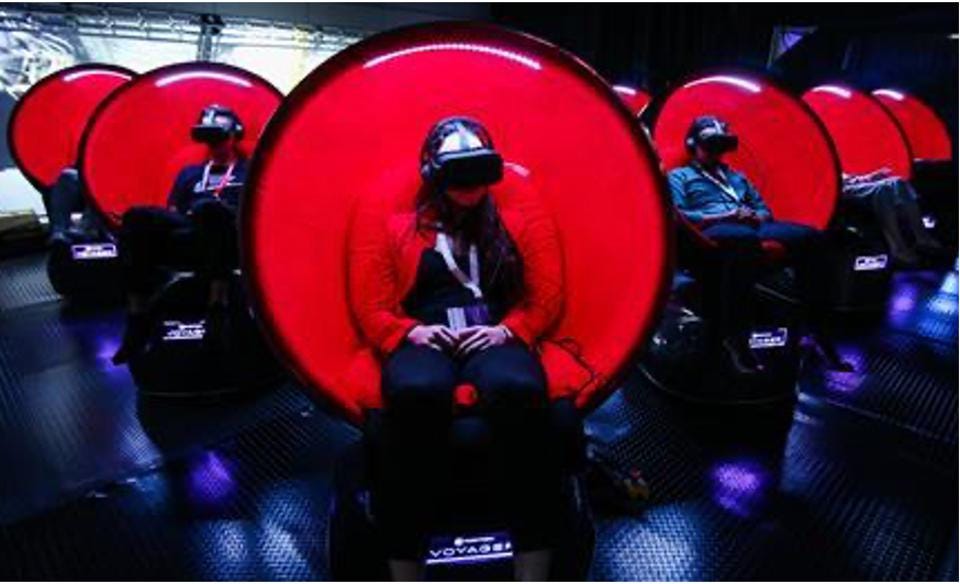 The VR Voyager Motion Chair from LA-based Positron is ushering in a new, fully immersive way to experience films, spectacular locations, and experiences.

What Is The Positron VR Motion Chair

· Spin, swivel, and release up to 6 different scents in a film

· Have haptic pillows that provide fully immersive audio, and sensations like the feelings of wind, or cars whizzing by

· Are disinfected after each screening, for sanitation

Founder and CEO Jeffrey Travis combined his technical knowledge as a biomedical engineer who designed motion platforms for simulators, with his film-making abilities. Travis previously directed films, animation shorts, TV, and commercials. He saw an opportunity to enhance great storytelling and content with multi-sensory VR experiences. Having worked as an SVP at Disney, I know how critical great storytelling is to the success of a film. Gimmicky technology alone, won’t cut it.

Oscar winning, Indian music composer, singer, songwriter, producer, director, A. R. Rahman, with support from Intel and others, created the 37-minute VR film, Le Musk, about perfume, to be shown in the Positron chairs, with motion, music, and scent integrated into the storyline. It was shot on 14 different cameras and enhanced by 10 visual FX houses. Le Musk premiered at the Cannes XR program in May 2022 and is currently being shown in two Positron XR Cinemas, one in Los Angeles and one in Toronto.

Other Positron films include multi-sensory, “in real life” feelings of being on top of Machu Picchu in Peru, climbing Mount Everest, and a 17-minute Yosemite Experience narrated by Bryan Cranston of Breaking Bad. According to Yosemite Cinema owner Matt Sconce as reported in ABC Action News: “You can experience hiking Mount Everest, flying through Yosemite, and climbing El Capitan… Things you can’t do in the real world because of danger and cost. Here you can have those adventures without leaving the cinema. Visitors to Yosemite experience angles and heights they can’t see on a normal visit. They smell the pine trees and campfire, as Teddy Roosevelt talks to John Muir and see the cave paintings as they fly through the valley with the mist and waterfalls.”

They developed the short film Myth: A Frozen Tale from Disney, and The Secrets of Tutankhamun, a 12-minute immersive VR journey that takes viewers closer than ever before to the ancient tomb, artifacts and mysteries of King Tut.

To encourage growth and innovation in VR filmmaking, Positron established the Positron Visionary Award in partnership with the Cannes Film Festival, where VR film makers receive awards for Excellence in Cinematic VR.

The Business Model and Economics

Positron leases its VR theaters in partnership with premium venues that have established foot traffic, in exchange for a percent of ticket sales. They produce original documentary and narrative film content for the chairs, and license and distribute it. No home viewing chairs are available yet, but most likely will be in the future. In September 2020, the company launched an IP licensing program that allows partner companies to use the patents, designs, and the software to manufacture and sell their own customized VR chairs. An important partner is Taiwanese company, Brogent, that operates on-location immersive VR entertainment experiences all over the world and can help Positron expand globally and particularly throughout Asia.

The fully equipped pods cost approximately $50,000 each. At $20 per ticket, assuming an average of 20 viewings per day, 7 days a week, breakeven would occur after 18 months, not including real estate space costs. If the chairs take off, economies of scale could kick in, lowering the costs.

Why It’s A Unique VR Pioneer Worth Watching

Positron merits keeping an eye on for several reasons:

· They’re a great example of cross-disciplinary innovation and collaboration

· They demonstrate how important storytelling is to technology, and how technology can make storytelling more engaging, immersive, memorable, and intensely experienced

· They’re where the Metaverse is going and the company is way ahead of the curve. Beyond just a 3D visual experience, they’re multi-sensory, with movement, scent, breezes, and heightened feelings of exhilaration

The question will be how quickly they can scale, and if the economics will allow them to do so quickly. The average $20 dollar ticket price seems reasonable, and they have a significant head start on combining all the necessary technologies with a pipeline of award-winning VR content they have the rights for. The quality content and venue partners are great for gaining positive influencer advocacy an early adopter word of mouth.

Special thanks to Rithik Puli, my research assistant, for his help researching Positron.

Source: Is The Future Of Cinema Fully Immersive And Multi-Sensory?