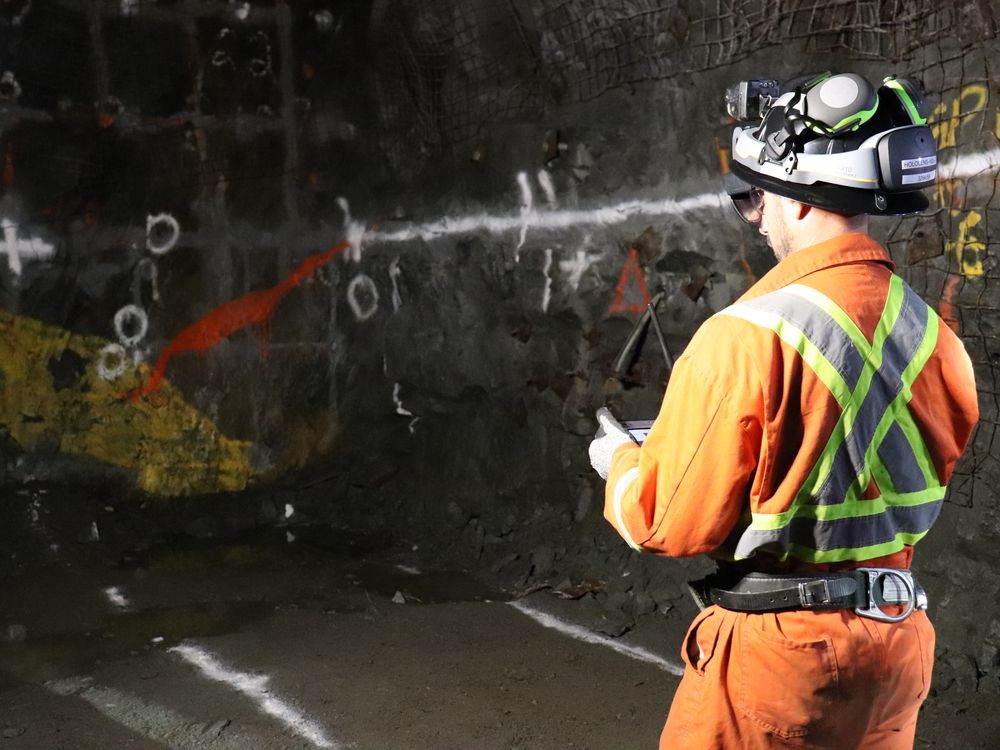 By msensory team21/09/2022No Comments
Historically, miners must physically interact with rock faces to determine where to make drill holes for blasting. It’s one of mining’s most dangerous jobs.

Cambrian College’s applied research division is partnering with NSS Canada to develop a harness that would allow augmented reality technology to be mounted on a typical underground miner’s hardhat.

The goal would be to develop a system that would allow mining hardhats to be outfitted with the Microsoft HoloLens 2 AR system.

Investopedia defines augmented reality (AR) as the modification of a real-life environment by the addition of sound, visual elements, or other sensory stimuli. One of augmented reality’s primary goals is to highlight specific features of the physical world, increase understanding of those features, and derive smart and accessible insight that can be applied to real-world applications.

The trick for researchers is to bring AR underground in a practical way.“Right now, there’s nothing on the market to mount a HoloLens on a hard hat for mining,” said Matteo Neville, a mechatronics engineering technology student at Cambrian who’s working on the project. “There’s some stuff out there for construction environments, but nothing for underground. That’s what we’re doing.”

Neville explained there are a number of challenges in developing an appropriate mount for the tech that the project team is hoping to address.

“It’s curved, with lots of different angles and surfaces, so it’s hard to design something that can easily fit on it,” he said. “And because there are so many regulations – like you can’t drill holes or use certain types of glue – it becomes a challenge to find a way to mount something onto it. You can’t do a lot of the things you normally would, and so you can’t use those technologies.”

NSS General Manager Matthew Brown said the ability to use AR technology in underground mining could have a number of advantages for the industry. But most of all, it would improve miners’ safety.Typically, he said, underground miners must physically interact with rock faces to do markups to determine where to make drill holes for blasting.

“Historically, this has been a very physical process,” he said. “Underground, those exposed rock faces are one of the most dangerous places to be, because it’s unsupported, unscreened, unbolted, and that’s where we see the largest number of accidents.”

Using AR technology, properly outfitted for underground work, the miner can interact with those dangerous spots from a greater distance.

“They don’t have to physically be within that danger zone,” he said. “It will remove them so that the human is no longer involved in those dangerous areas or put at risk.”While AR technology use has become more popular in the civil sector, Brown said not much has been done with it in the mining industry, at least now yet.

“We’re one of the first groups that has transitioned this technology (to mining),” he said. “No other company in Canada is doing this type of development and innovation.”

The project is set to begin in September and the company hopes to have its first working prototype developed by the end of the year.

Students and faculty from Cambrian College will be among those working on research and development, which will include manufacturing the prototype.

“This project fits well within the wider scope of projects we’ve been doing for the last several years,” said Mike Committo, director of applied research and innovation at the College.

He added, “It’s great for Cambrian to give this student experiential learning opportunity. It’s gives NSS access to funding to offset this project, and then at the end of the day, it’ll hopefully inform a design that will lead to a prototype, and ultimately a project that NSS will be able to bring to market.”

The Local Journalism Initiative is made possible through funding from the federal government.