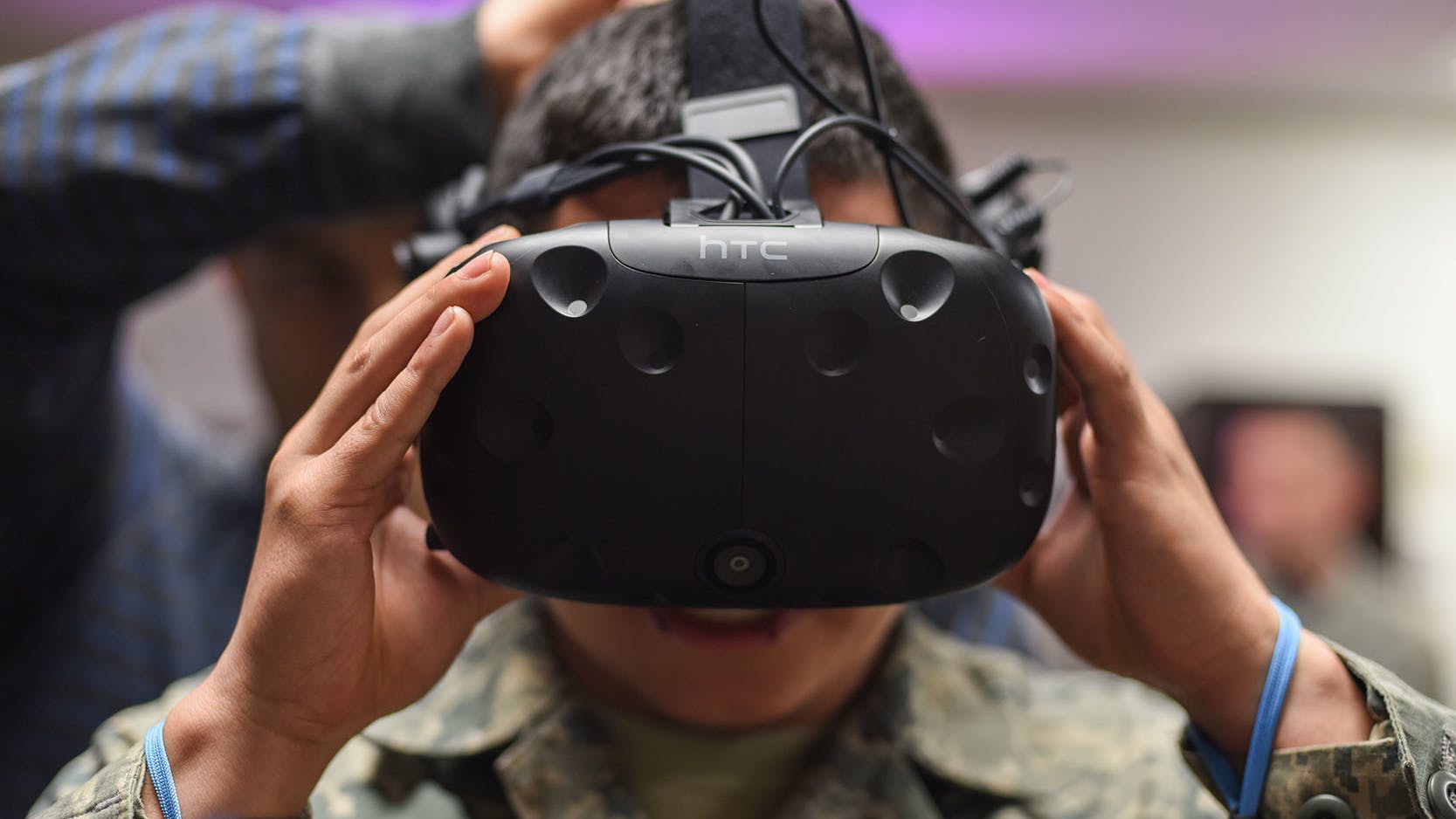 With the use of VR, patients don’t have to just imagine the environment in which their trauma occurred as is the case with imaginal exposure therapy. Instead, patients can see it again themselves. For military servicemembers who may suffer from PTSD, being reminded of the incident that instigated their suffering, and processing through said incident, can be the best way to overcome PTSD, according to Dr. Albert ‘Skip’ Rizzo, director for medical virtual reality at University of Southern California’s Institute for Creative Technologies.

“At first blush, when you hear about this, people say … why would you make somebody do this?” says Rizzo. “The simple answer is we follow the science that the best evidence-based approach for treating PTSD — making the person or helping the person to confront their trauma, but in a safe place with a thoughtful clinician, and to do that repeatedly and over time, you sort of detune the nervous system response to trigger stimuli in the world.”

Exposure therapy is about learning through experience that the thoughts, memories, and situations that one may avoid — such as due to their PTSD — are safe, says Dr. Andrew M. Sherrill, assistant professor of psychiatry and behavioral sciences at Emory University School of Medicine and clinical psychologist for the Emory Healthcare Veterans Program.

Dr. Andrew M. Sherrill“And through that, having more flexibility and choice in how one engages in the world,” Sherrill says. “We think of PTSD as being primarily rooted in reexperiencing symptoms and efforts to avoid those symptoms that do not last in the long term.”

Rizzo’s work using VR for exposure therapy to treat PTSD has been ongoing for more than a decade. The idea became “Bravemind,” a VR tool to treat PTSD. It came to him in 2003 after seeing a video game, “Full Spectrum Warrior,” which had presented a combat environment that Rizzo says looked Middle Eastern.

“When I saw that video, I thought, ‘You know, I know people have experimented with VR as a tool for delivering exposure therapy for PTSD in the past.’ Barbara Rothbaum had built a virtual Vietnam. JoAnn Difede and Hunter Hoffman had built a virtual World Trade Center application,” says Rizzo. “And the whole idea there was that you could use VR to immerse people in simulations that resemble the context in which they’ve been traumatized.”

Rizzo says Bravemind was built of digital art assets from the game and originally had four “worlds,” environments relevant to Iraq and Afghanistan that include experiences like driving on a desert road and walking around in a marketplace.

Administering clinicians could then adjust the time of day in the virtual environment and add content to the simulation in real-time such as explosions, jets, or incoming insurgents. In a therapy session, a patient could talk about their memory and a clinician could attempt to mimic it virtually.

However, Beidel explains that one cannot really know what they are imagining.

“You could tell me you’re imagining an IED explosion, and you could be really thinking about puppies for all I know,” says Beidel. “So, with virtual reality, it puts you closer to the real-life exposure.”

VR-assisted exposure therapy for PTSD is not limited to just a headset and headphones. It is a multisensory production that may include vibrating platforms, a fake rifle, and scent machines to evoke memory-triggering smells.

“Smells are really important, because we know that from your olfactory bulb to the center of your brain, that’s a straight run inside your brain,” says Beidel. “It goes straight into your hippocampus, which is your memory center, and also your amygdala, which is the center for emotion.”

“Events that have strong smells associated with them become very powerful and very emotional events,” she continues. “By using these different cues, I’m convinced, and other people are pretty sure that this is what makes this therapy so effective. If you think about it, when you imagine something, it’s pretty much visual. You may imagine sounds, but you really don’t imagine smells, and I think it’s hard to imagine a smell. But if I can really put that smell under your nose or in the air when you’re imagining the event, it becomes a much more powerful treatment session.”

Sherrill says that just because the technology is there does not mean every part of it has to be used during a session. He often uses VR when administering exposure therapy to PTSD patients. He says less is more when it comes to which parts of the technology to use.

Dr. Deborah BeidelThe goal is to activate the patient’s traumatic memory and keep them in it instead of engaging in avoidance behavior, says Sherrill. If that activation does not require a particular smell, there is no need to simulate it, he says. Similarly, virtual re-creations do not have to include every part of the memory, only enough to trigger the memory.

“An example that comes up a lot for us is: a person might struggle with the memory of a roadside bomb. And they have intrusive memories of seeing their friend get injured or killed from the bomb,” Sherrill says. “What we do with VR is we wouldn’t use VR to create a simulation of a dead body. … What we would do instead is put them in a virtual Humvee, have them drive down a virtual road where the settings match what actually happened to them. … They’ll be immersed in this virtual world and they’ll look at a place where that looks like where they saw the dead or injured body, and we’ll have them imagine the bodies there. So it’s almost like the VR is like a backdrop that helps them recall all these details.”

VR is a tool for delivering exposure therapy, but not a treatment in itself. The onus for doing the healing work still lies with the patient and clinician.

“The real work, the real therapeutic piece is the activation of the memory and sitting with the memory, and not doing anything that’s avoidant in the process,” says Sherrill. “So, I don’t want them looking away, closing their eyes. I don’t want them fidgeting or anything like that. I want them to be directly faced with their memory, and then have them learn through that experience that it is a memory and that what happened in the past is truly traumatic but the memory itself is safe.”

Since the early 2000s, Bravemind has grown to 14 worlds covering more scenarios that patients may need, says Rizzo. The scope has expanded beyond just active-duty combat. The software now has options for combat medic and military sexual trauma scenarios and continues to branch out. Rizzo’s lab is working to develop content for police, healthcare workers during the COVID-19 pandemic, and the war in Ukraine.

Rizzo says the program has been delivered to more than 100 clinical sites, including VA hospitals, university clinics, and private clinics. The latest 2019 version has reached some 35 sites.

UCF Restores, a clinical research center focused on PTSD, uses VR in almost all its treatments, Beidel says. The free treatments have expanded over time to include first responders, prompting the center to develop its own VR software to better cover more demographics.

Despite this technological development, such methods do not rule out conventional imaginal exposure therapy. A 2016 study published in the American Psychological Association’s Journal of Consulting and Clinical Psychology compares imaginal exposure therapy and VRE. Researchers found that, although both methods resulted in significant reductions in PTSD symptoms, one was not better than the other. The study revealed that, during three- and six-month follow ups, the former method had “significantly greater symptom reductions.”

The results confirm Dr. Paula Schnurr’s impressions. Schnurr is a psychiatry professor at the Dartmouth Geisel School of Medicine and executive director of the VA’s National Center for PTSD. She tells VA clinicians she does not have numbers for VR usage at VA hospitals but that, anecdotally, it does not seem to be used often. She says evidence suggests VR does not necessarily promote greater engagement and better outcomes through treatment.

“Virtual reality for PTSD and other disorders is effective, but it’s not more effective than standard therapy,” says Schnurr. “So many people I know who’ve been trained to use VR don’t use it because they don’t see the relative advantage of using it.”

Yet, Rizzo and Beidel say the evolving approach may provide an appealing alternative, particularly for younger generations.

“I think VR is a way of getting younger people to come in and think about therapy, because it breaks the stigma of what we think therapy is,” Beidel says. “They’re not going to just come in and talk to someone. … I find that offering VR is a way sometimes of getting people who otherwise would say: ‘I’m not going to therapy. Therapy is stupid,’ to come in and try this new form of therapy. I don’t think that VR is the therapy. But I think it gets people interested and coming and trying the therapy out.”

Sherrill says he sees the value of VRE as a choice in therapy.

“Anytime we give people a choice when engaging in a therapy, they’re going to be more invested,” says Sherrill.