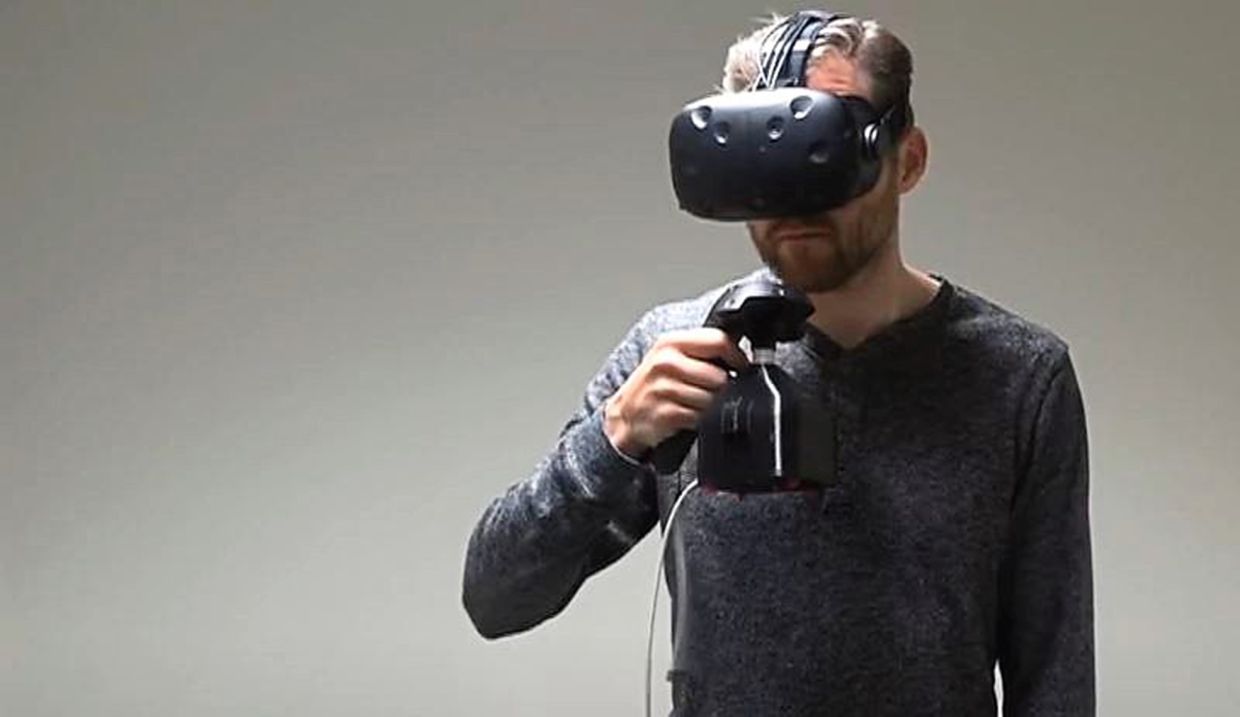 Researchers at Stockholm University and Malmo University have made an immersive VR system that tests gamers’ sense of smell. — PETER LUNDEN/YouTube screenshot

Technology has made major strides in delivering crystal-clear images and sounds but has made little headway in the realm of scents.

That may change as researchers come up with new ways to bring the sensation of smell into the digital world and even find meaningful uses for it.

Can you imagine being in an immersive virtual reality (VR) experience that includes scents? Researchers at Stockholm University and Malmo University have made an olfactometer, an odour machine that can be paired with a gaming computer.

To demonstrate its use, the researchers have created a VR simulation set in a wine cellar in which players try to guess the aroma “released” by different types of wines.

“The possibility to move on from a passive to a more active sense of smell in the game world paves the way for the development of completely new smell-based game mechanics based on the players’ movements and judgments,” said Simon Niedenthal, interaction and game researcher at Malmo University, in a statement by Stockholm University.

The olfactometer has four different valves, each connected to a channel that the players can control through a computer to create different mixtures of scents.

The machine, which is attached to the VR system’s controller, releases the scent when it detects the player lifting the glass.

The game has different levels of difficulty with increasing levels of complexity.

“In the same way that a normal computer game becomes more difficult the better the player becomes; the scent game can also challenge players who already have a sensitive nose.

“This means that the scent machine can even be used to train wine tasters or perfumers,” said research team leader Jonas Olofsson.

The researchers have made the code for the virtual wine tasting game as well as the blueprints and instructions for the machine available online in the hope that other useful purposes can be found for it.

Last year, researchers at the University of Pennsylvania and Penn’s Perelman School of Medicine in the US announced that they had developed a non-invasive approach for screening hard-to-detect cancers, such as pancreatic and ovarian.

It’s claimed that the odour-based tool, which sniffs out vapours emanating from blood, was able to distinguish between benign and pancreatic and ovarian cancer cells with up to 95% accuracy in tests.

The tool has an electronic olfaction system, or “electronic nose”, that’s equipped with nanosensors calibrated to detect the composition of volatile organic compounds (VOCs) that are emitted by blood plasma cells.

The researchers then used artificial intelligence and machine learning to decipher the VOCs, as previous research has shown that VOCs released by tissues and plasma from ovarian cancer patients are distinct from those released by patients with benign tumours.

The researchers said that the system has been trained and tested to identify VOC patterns that are linked to cancer and healthy cells in 20 minutes or less.

They are working with healthcare company VOC Health to commercialise the device for use in research and clinical applications.

People can lose their sense of smell due to health ordeals such as a brain injury or Covid-19 infection.

IEEE Spectrum reported that Prof Richard Costanzo at Virginia Commonwealth University, United States, is hoping to help people regain their sense of smell through the development of a neuroprosthetic for smell.

It would consist of a sensor similar to a commercial electronic nose that detects odours and transmits the info to implants in the brain.

The implants – an array of electrodes – will simulate the corresponding signals in the brains.

The concept is similar to how cochlear implants work to aid people with hearing losses.

Prof Costanzo’s colleague, Daniel Coelho, a professor of otolaryngology at VCU and an expert in cochlear implants, explained: “It’s taking something from the physical world and translating it into electrical signals that strategically target the brain.”

Prof Costanzo demonstrated the workings of the prototype with a mannequin head decked out with a pair of glasses and electronics.

When he held up a vial of blue liquid to a tiny sensor, an LED (representing a brain signal) glowed blue and his phone indicated that it was a cleaning product.

When he waved a purple liquid, the sensor correctly detected it as mouthwash.

Prof Costanzo and team are now focused on getting the sensors to detect more smells and figuring out the best interface for pairing with the brain.

A commercial device is unlikely to become available anytime soon, he said, adding, “I think we’re several years away from cracking those nuts, but I think it’s doable.”

Unlike the other technologies, which are in their infancy, here’s one that is ready to enter the market.

Nikkei Asia reported that Sony is expected to release an olfactory device next year that will serve as an early warning system for signs of dementia and Parkinson’s disease.

According to Sony, the device will test a person’s sense of smell, as impairment may be an indicator that the person is about to develop dementia or Parkinson’s disease due to, perhaps, worsening neurological functions.

The system, called Tensor Valve, does this by releasing a set of strong scents that have to be identified by the user.

The test only takes five to 10 minutes to be completed, and the patient’s sense of smell will be rated on a scale of one to eight.

Osamu Hajimoto, who is the vice president of new business and technology development at Sony, the company that makes the PlayStation 5 gaming console, is looking into ways to use the device in the entertainment field.