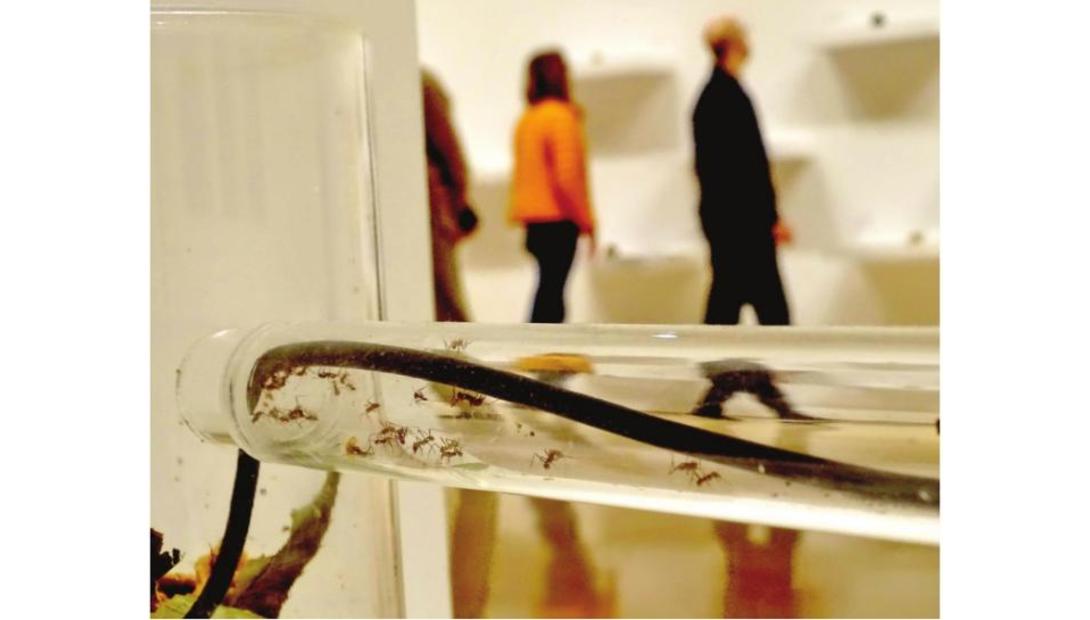 A haunting collection of smells, a real ant colony that moonlights as a DJ, an edible blob, a car that emits feathers and many other provocative wonders are packed into the latest big exhibit at MSU’s Broad Art Museum.

The ants, the blob and their ilk have taken over the second floor through March, the culmination of a three-year program that has brought international, cutting-edge artists to work with faculty and students.

Most mash-ups of art and science have a predictable arc, but this tryst is a bit kinkier than usual. Yes, ice crystals are beautiful, the human body is a wondrous machine and the night sky is transcendent, but wouldn’t you rather watch videos of surgeons attaching an ear to an arm?

Wait, come back! “Matter(s) Matter(s)” is a mind-bending dive into the origins of knowledge and the way we process information. Broad Museum associate curator Stephen Bridges called it a “complicated cross-pollination” of disciplines.

“It’s harder and much more complicated, on both sides, to go deeper,” Bridges said. Bridges is the co-curator of “Matter(s) Matter(s),” along with guest curator Jens Hauser of the University of Copenhagen.

Those who turn their backs to the arm surgery video, as many will want to do, are rewarded by a mind-expanding encounter with the exhibit’s unassuming-looking show-stopper.

Berlin-based artist Sissel Tolaas has opened up a new way of perceiving reality by creating a “smell map” of the east side of Detroit.

Sissel is an olfactory artist. Her studio is an archive of 6,000 scents she has identified, captured and synthesized.

At the Broad exhibit, she lined a long wall with 3D printed polygons, each coated with a “nanotechnology slurry” — an artificially synthesized smell.

When the perceiver (no longer just the viewer) picks up the object, hand warmth activates the coating to bring a particular place in Detroit to life. A map indicates where each smell was “harvested.”

The specific yet elusive smells summon swarms of images and associations better described in novels and poetry than a newspaper article. Each of them switches on a powerful part of the brain that is seldom served so seriously.

The stunning piece will spark a lot of conversations on a range of topics, from the politics, culture and geography of Detroit to the way the brain gathers facts and memories.

“Fair warning — it’s not all about pretty smells,” Bridges said. “Some might be off-putting to some people.”

Tolaas boldly messes with the wiring that links the nose to the brain’s memory center. “Her mission is to reconnect us with these animal faculties we rarely use or recognize to understand the world around us,” Bridges said.

One big thing scientists and artists have in common is that they both make the invisible visible.

A video in the Broad exhibit features a peppy toy car weaving through crowded Manhattan streets, emitting cheerful green and purple exhaust. In a nearby glass case, a plume of fluffy pink feathers streams from the tailpipe of a model car.

The video, by a French-based duo called HeHe, short-circuits your brain in a delicious, good-bad way. Wouldn’t it be great if auto exhaust was that much fun? Of course, it’s not — it’s deadly poison.

No account of “Matter(s) Matter(s)” would be complete without acknowledging the ant in the room.

Bridges called the symmetrical lucite city in the center of the gallery a “proper” ant colony, meaning it’s not a few ants sprinkled into a tube for the delectation of art lovers and left to die.

“We had to get USDA permitting to get an ant colony in the museum, living organisms that are non-native species,” Bridges said.

Leafcutter ants are farmers. They cut and gather bits of plant matter to feed their fungus gardens.

Live feeds track the ants’ foraging activities. Best of all, the scratching noises, or stridulations, of the ants, are amplified and fed to a pair of turntables with vinyl at the ready.

It’s a good thing the ants are vegetarians because their bottle city at the exhibit is not far from “Spatium Gelatium: Form 171018,” a blob of edible Argentinian beef gelatin by artist, architect and researcher Zbigniew Oksiuta.

The blob does a great job of just being a blob, but it’s also a prototype for a futuristic, temporary shelter. Oksiuta’s shapes, made from biological polymers like gelatin and agar, are organic and edible and infinitely changeable in shape.

Pieces like Oksiuta’s and a neighboring display of Lake Erie’s deadly algae blooms, also by HeHe — with real, living algae — twist aesthetics, ethics and epistemology (how we know what we know) into a rubbery Möbius strip of input.

In addition to bringing art and science together, Bridges said the exhibit fulfills another core Broad Museum goal: to weave itself deeper into the expansive tapestry of MSU’s colleges and laboratories.

“When you have internationally renowned artists coming from all over the world, just to work with MSU faculty researchers — it’s nice to capitalize on an opportunity like that,” he said.

Source: Science and art have a heady tryst at MSU’s Broad Museum