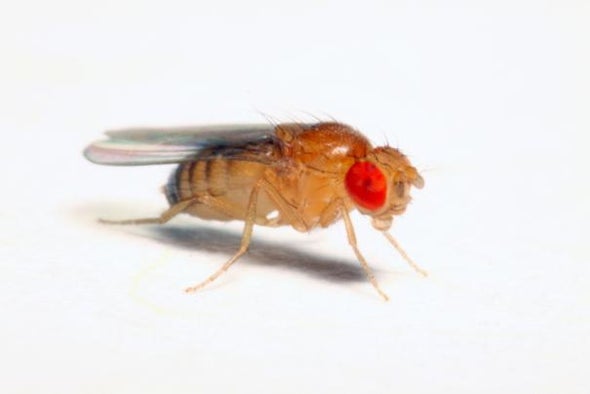 By switching fruit flies’ sensory neurons on and off with light, scientists were able to create the sensation of sweet or bitter tastes. Christopher Intagliata reports.

There’s a scene in the Matrix where the character Cypher talks about the illusory experience of eating a fine meal:

CARLOS RIBEIRO: “And then he eats from the steak and says:”

<<FILM CLIP: “I know this steak doesn’t exist. I know that when I put it in my mouth, the Matrix is telling my brain that it is juicy and delicious.”>>

CARLOS RIBEIRO: “It tastes so good, I prefer this virtual reality to the cruelty of the world.”

Recounting that scene is Carlos Ribeiro, a neuroscientist at the Champalimaud Foundation in Portugal. He has a special interest in that scene because he has essentially recreated that phenomenon—in fruit flies. “This is exactly what we’re doing to the flies.”

Here’s how it works. He and his team raised genetically engineered flies with taste neurons that can be turned on and off with red and green light. That kind of process is known as optogenetics.

The experimental details are in the journal eLife. [José Maria Moreira et al., optoPAD, a closed-loop optogenetics system to study the circuit basis of feeding behaviors]

So, why do this? “We really want to understand how the brain uses sensory taste information to make feeding decisions—and also what goes wrong in obese people, for example, or when there are other diseases related to nutrition.”

He also imagines we could someday use gene therapy techniques to plug senses back into the noses or tongues of people who’ve lost the ability to smell or taste. But for now, that is, like the Matrix, firmly the realm of science fiction.

[The above text is a transcript of this podcast.]