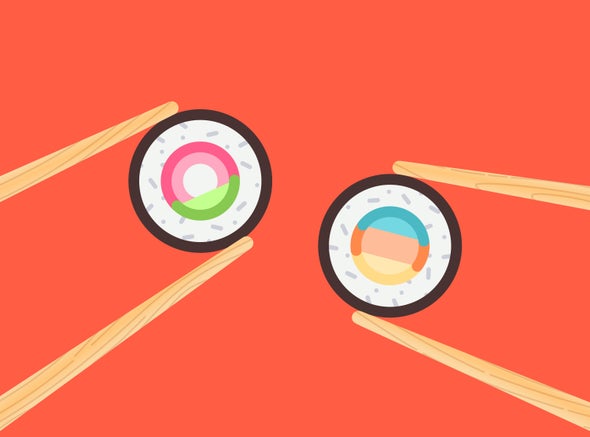 Foods high in sugar and salt can be unhealthy, but these additives are too delicious for many of us to give up or reduce in a big way. What if we could somehow enjoy their taste without actually eating them? A student team has now designed a spoon with a structure that stimulates taste buds to produce a sensation of sweetness—without adding calories or chemicals. The project follows previous work involving flavor-enhancing cutlery, such as chopsticks that amplify saltiness with a mild electric current.

The five undergraduate and graduate research students wanted to develop their new spoon, called Sugarware, for people with disorders such as diabetes, which affects 11.3 percent of the U.S. population. Sugar is largely off the menu for many with the condition.

The new spoon would have several bumps on its underside, creating a greater surface area to press against the tongue. The bumps can be covered with a permanent layer of molecules called ligands. These ligands bind with taste-cell surface receptor proteins that typically react to sugar molecules or artificial sweeteners. The binding can trigger a cascade of nerve signals, causing the brain to register a sensation of sweetness. A diner could thus “stimulate sweetness receptors … without actual injection of sugar or artificial sweeteners,” the team explained during the 2022 Biodesign Sprint, an online educational competition in which researchers pitch ideas that can be turned into commercial realities. Sugarware won its designers the runner-up spot in the student category.

The student researchers cite two separate influences. “We got our design inspirations from a Korean designer, Jinhyun Jeon,” says Shiyu Xu, who was a graduate researcher in animal science at Cornell University when the project was developed. Jeon’s work on synesthesia has explored how the senses can affect one another while eating. In one piece, “She was using a similar kind of knobby spoon to experiment [with] how the eating experience can change and can get affected by those spoons,” says team member Weiran Tao, a graduate researcher at New York University.

Research by Jeon and others focuses on how textures influence taste perception, sometimes in unlikely and intriguing ways. For a past project, University of Oxford experimental psychologist Charles Spence, who is not involved in the Sugarware project, found that people who consumed ginger cookies, coffee or wine while rubbing sandpaper with their fingers rated the taste differently than when they rubbed a smooth surface. Spence says he is not sure about the reason, but “maybe the roughness of sandpaper matches with the pungency of ginger biscuits or the roughness in the mouth of black coffee.” Or, in the case of the new spoon, he suggests that “if the texture feels different from what you’re used to, then suddenly you sit up and take notice,” and that changes the experience.

Xu says the Sugarware team also looked at a Japanese study by Homei Miyashita of Meiji University and his colleagues that found ways to stimulate salt receptors in the tongue. With the company Kirin Holdings, Miyashita’s team developed specialized chopsticks: a weak electrical current runs through this novel cutlery, shifting the sodium ions in a mouthful of food to excite the tongue’s salt receptors. The researchers reported that their chopsticks could increase diners’ perception of salt by up to one and half times. A U.S. company, Taste Boosters, takes a similar microcurrent-based approach to designing a utensil called SpoonTEK.

These ideas are similar to Sugarware in that they all use utensils to enhance taste without a user having to actually consume any salt or sugar. “But the mechanism for stimulating the taste buds is completely different in Sugarware,” Xu says: it uses texture and taste-bud-stimulating molecules rather than electricity.

Besides salt and sugar, the Sugarware researchers were also interested in reducing the need for artificial sweeteners. These compounds are integrated into many foods and “consumed by hundreds of millions worldwide with the notion that they generate the sweetest sensation without having the caloric price,” says Eran Elinav, a microbiome researcher at Israel’s Weizmann Institute of Science, who is not involved with the student project. But these chemicals do have an effect on the body. In 2014 Elinav’s team had mice consume the artificial sweetener saccharin and found that the rodents’ gut microbiome did interact with the sweetener. “These interactions counterintuitively resulted in worsening of [the animals’] glycemic response,” a mechanism that affects conditions that include diabetes, Elinav adds. Other research has demonstrated that humans who consume some sugar substitutes also experience changes in the gut microbiome, as well as spikes in blood glucose. “Artificial sweeteners are clearly not inert in the human body,” Elinav says. Because Sugarware would stimulate a sweetness reaction without requiring users to consume anything, it might be able to sidestep the issue of glycemic response.

The idea is “very creative,” says one of the Biodesign Sprint judges, Paola de Almeida, who is global director of corporate innovation at candy maker Mars. But the product’s commercial success would require a significant behavioral shift among consumers: instead of adding the usual sugar or artificial sweeteners, “now we’re saying, ‘Use this utensil,’” de Almeida says.

It remains to be seen whether flavor-enhancing utensils will catch on. The Japanese team does not plan to commercialize its electric chopsticks until later this year, and the Sugarware researchers are still working on a prototype. Part of their contest prize includes a mentorship from Mars staff.

But if you want to play around with cutlery and flavor right now, you don’t need specially designed forks or knives. Previous research shows that the weight, color and shape of normal utensils can change how we perceive food’s taste. So grab a variety of cutlery and hold an independent taste test. You may find some spoons are sweeter than others, even if they’re bump-free.

New types of cutlery can enhance flavors such as sweetness or saltiness for a more satisfying meal.