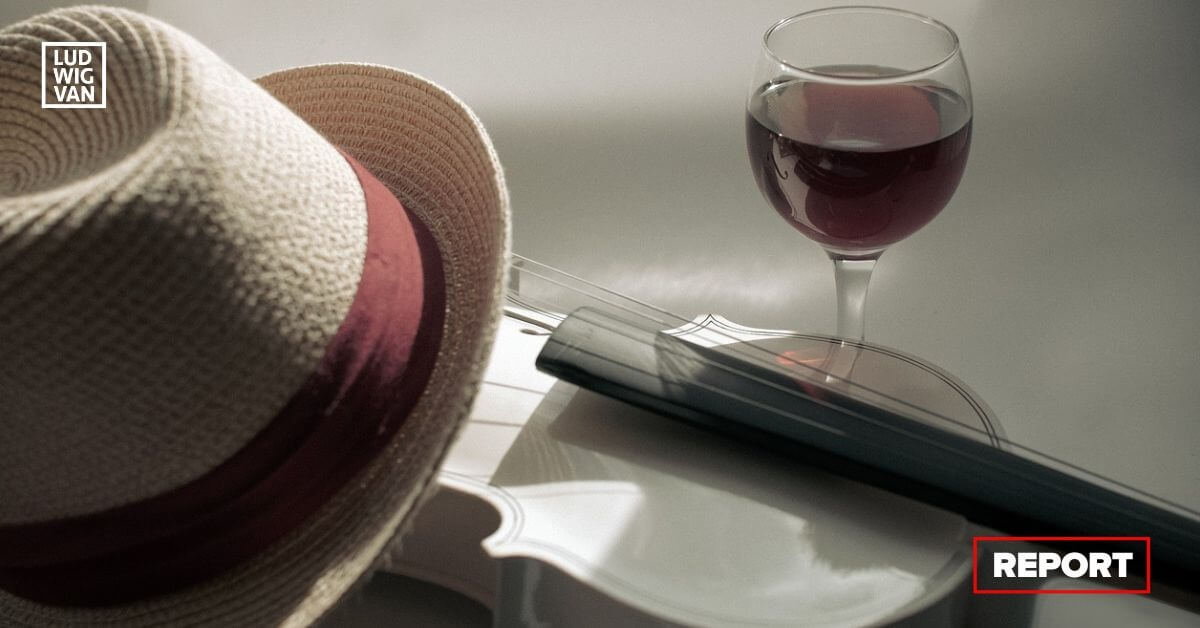 Sonic seasoning, or oenesthesia, is a growing field of research into the way sounds can affect the way we experience food and drink.

Naturally, much of the research has been driven by companies in the food and drink industry.

In a 2017 study at the University of Oxford, UK, researchers found that test subject rated the wines they tasted up to 15% higher, and their “celebratory” rating went up 20%, when they heard the sound of a cork popping — even though they were tasting the same drink. Professor Charles Spence, who heads the Crossmodal Research Laboratory at the University of Oxford, has dubbed his specialty “wine psychology”.

The concept has taken hold quickly in the wine industry, from using specific music and DJs at tasting events, to the idea of blending sounds with wine-making itself.

Chris Carpenter, a winemaker for several wineries in Napa Valley, as well as Hickinbotham winery in Australia, is quoted in Wine Enthusiast.

“I enjoy many different genres, but classical music is the only music I blend to,” he says. “Its pattern of sound and mood, its complexity and its timelessness work on my brain in a way that seems to spark the same output in bringing the various flavours in my wines together.”

Other winemakers are turning the idea around. At Medlock Ames winery in California, customers are offered the Immersive Sound Experience — a chance to hear the sounds of wine-making as they tour the premises, prior to tasting.

Recently, tequila maker Avión created the Avión Listening Experience for the release of a new line of tequila. They used the real sounds of Mexican tequila making to create a kind of sensory tour of the process.

The company worked with an audio engineer to record the actual sounds of the tequila making experience from start to finish. Then they turned to Brampton’s own Wondagurl, a music producer prodigy who got her start in her teens, and has gone on to work with the likes of Drake and Rihanna, to create the soundscape.

“The original audio was seven to 10 years of the tequila making process turned into 10 minutes of audio,” WondaGurl explained at a listening event in Miami. “You’ll experience how sound affects taste. As you listen and drink, you’ll notice how sweet and salty are amplified by high pitch, and flavours such as minerals and herbs by low pitch.”

The music producer worked with the raw sounds to work them into a soundtrack for the tasting event. “I amplified certain things, just to bring out certain frequencies, added my little sauce to it,” she explained. “It felt to me like I was scoring a movie, like the sound of walking or water dripping. To close your eyes and listen and just add to the feeling of that.”

Part of the impetus towards delving into the positive effects of pairing sound/music and taste comes from other research into the negative effects of background noise. Some of that was driven by the restaurant industry.

Another study by Spence, along with researchers from Denmark, Colombia and the US, notes that marketing-driven initiatives have used a number of tactics, including using music that has been specifically composed for a specific pitch or timbre, as well as soundscapes, that match the flavours of the food or beverage in question.

Their definition: “The term “sonic seasoning” refers to the deliberate matching, or pairing, of sound/music with taste/flavour in order to enhance, or modify, the multisensory tasting experience.”

The study, published in Frontiers in Psychology in 2021, reviews the case studies on hand. There are links between the chemical-related senses of taste and smell and our sense of hearing. It goes into the field of psychophysics, or the study of how our senses interact with physical stimuli. The science behind that goes back decades to research from the late 1960s and 1970s.

Among the surprising findings of the review:

It notes that the effects that have been documented seem to cut across cultures, although this particular aspect has only been tested on a few occasions.

To a certain extent, it mirrors the sounds of consuming those foods. We produce high frequency sounds when we bite into crispy foods, vs lower pitches when eating crunchy foods. It’s a very complex experience, in other words.

As they note, it’s a case of art, science and marketing coming together.

Sonic seasoning has been put into practice by a number of companies, including British Airlines for long haul flights. The airline worked with Professor Charles and his team to design a playlist that corresponds to the foods offered to passengers. It was a case of using music to make the experience of airline food better.

Why does this happen?

There are a few theories in play. One of them posits the idea that human beings first linked sound and eating as a way of testing the foods they were consuming. A crunchy carrot is a fresh one; a soggy one is to be left alone.

Another theory says that certain sounds make us focus on specific flavours; hence, the links between pitch and taste. The third theory links sounds, music and emotions, with a kind of spill over effect — we feel good about the sound, and it carries over into taste, and vice versa.

The phenomenon raises many questions, including the notion of intellectual property rights over multisensory experiences in a consumer setting. Can the pairing of music or sound with tastes (and products clearly) be patented? It’s a new field for the law as well as science.

Will pairing a legato passage of Mozart’s Flute Concerto No. 1 in G major (K. 313), with all its lovely legato passages, enhance the experience of puddings or mac and cheese — or will the staccato finish to the slow movement of Brahms’ Violin Concerto go down well with a crunchy carrot salad?