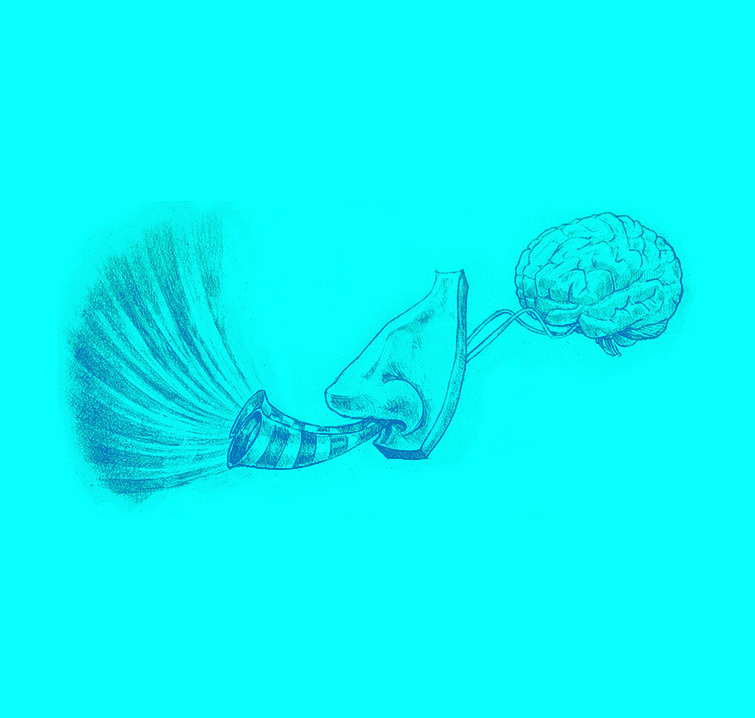 My first experience with olfactory virtual reality was truly trippy. Wearing a VR headset and holding a controller in each hand, I stood in a 3D room at OVR Technology in Burlington, gazing at a virtual table holding plates of tomato slices, garlic bulbs and basil leaves. As instructed by Jesse Stein, vice president of product and marketing, I used the controllers to pick up items with my white-gloved hands, bring them to my nose for a whiff and place them on the pizza beside me.

After I’d plunked down a few slices and bulbs, a lawn mower drove by, unattended, sounding just like a lawn mower and spewing grass in my general direction. As the four-wheeled interloper receded, I pushed a red button to slide the pizza into the oven.

The visual and auditory elements of this surreal experience were amazing. I felt like I’d been transported onto the Holodeck in a “Star Trek” show. But most remarkable were the scents provided by OVR Technology — garlic, cut grass, hot Italian pie — that wafted toward my nose at just the right moments.

The first time OVR Technology CEO Aaron Wisniewski tried VR, “It kind of blew my mind,” he told Seven Days. “I immediately was like, ‘This is the future. This is so cool. There is so much that can be done with this. But the thing that’s missing, the thing that would make it feel like a real experience, is what I specialize in, which is scent.'”

Unbeknownst to many, “Our sense of smell is the only one of our senses with a direct link to the memory and emotions section of our brain, the limbic system,” Wisniewski said in a TEDx Talk recorded in Stowe last May. “Every time you have an experience, it’s inextricably linked to the smell of that moment and stored in the memory banks that make us who we are.”

He believes that olfactory virtual reality could serve many purposes, from enjoyable to life changing. It could enhance a meditation practice, train employees in a task, teach first responders greater resilience to stress, diagnose anosmia (a loss or impairment of the sense of smell) and deepen exposure therapy for vets with posttraumatic stress disorder.

OVR Technology’s mission, Wisniewski said in an interview, “is to have real-world positive impacts by enhancing the virtual world through scent. It’s not just a cool thing or a gimmick. We want outcomes and impacts that are measurable.”

The company aims to improve health care, education and training, and its first product is a three-component platform called Architecture of Scent. One component is the small ION device, which straps onto a VR headset, close to the wearer’s nose. ION contains the second component, nine cartridges that store and emit highly realistic scents created by the company, or “scentware.” The third component is software that interacts with VR software to cue delivery of scents in precisely measured doses timed to correspond to the headset wearer’s behavior. 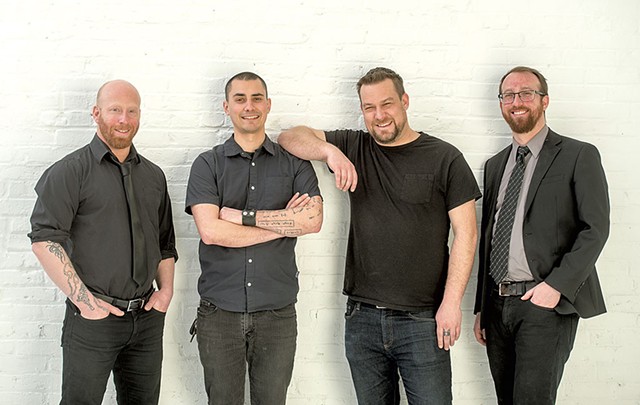 The scent of a rose should “be more intense the closer you get to it,” Stein said. “Or, if there’s a wind blowing” in the VR environment, the software calibrates “how the wind carries that scent.”

Last June, Flego and Cooper closed M//E Design, which had designed such products as the popular Core 360 active seating chair, to focus exclusively on the new business.

In 2015, the four founders learned about VR from Kip Steele, technical leader at Asure Software. Steele, who worked in information technology at the University of Vermont at the time, brought a headset to Generator.

About a year later, Champlain College started an experimental project to combine scents with VR. Faculty members invited Wisniewski to serve as a scent expert, and soon he and the other founders had created software, scentware and a prototype of the ION device. 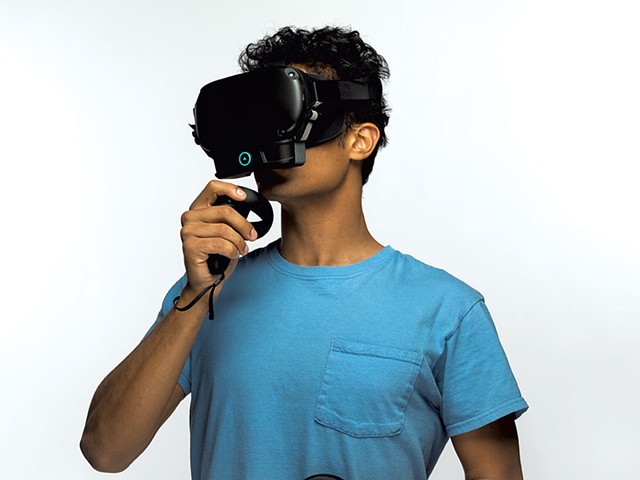 “It looks like an elaborate mousetrap,” Flego said of the prototype. At the proof of concept — a successful demonstration of the olfactory virtual reality technology — “we impressed some people, got a little bit of traction and a little bit of money,” he recalled. Wisniewski was convinced that the product had huge potential, and soon his brother, Flego and Cooper joined him in creating OVR Technology.

A key collaborator who has helped guide development of the Architecture of Scent is Albert “Skip” Rizzo, a research professor at the University of Southern California and director for medical virtual reality at USC’s Institute for Creative Technologies. He researches the use of VR to assess, treat, rehabilitate and increase resilience in psychology patients. Rizzo received the American Psychological Association’s 2010 Award for Outstanding Contributions to the Treatment of Trauma for his work using virtual reality-based exposure therapy to treat PTSD.

Rizzo “has a deep understanding of how scents are an integral piece of the puzzle of PTSD,” Wisniewski said. “We’ve been working closely with him and getting feedback from him on what types of scents to develop and how our technology can be effective with exposure therapy.”

Rizzo is currently perfecting his Bravemind VR program for vets with PTSD and plans to distribute it to more than 100 VA hospitals around the country. OVR Technology is developing combat-related scents to enhance Bravemind.

Closer to home, OVR Technology is collaborating with David Låg Tomasi, who teaches and conducts research in the UVM Integrative Health program and Larner College of Medicine. He’s also a clinical psychologist and psychotherapist at the UVM Medical Center.

“There is a lot of neuroscientific evidence of the role that sensory activation plays in our brain for general well-being,” Tomasi said, “and by that I mean either in the stimulation of the olfactory bulb or the virtual-reality type of strategy.”

Just as people can trick their brains into stimulating salivation by thinking about sucking on a lemon, he explained, VR can trick the brain into releasing neurotransmitters that are specifically focused on well-being.

“What is brand new is this combination” of olfactory stimulation and virtual reality, Tomasi emphasized.

“We’ve been doing integrative medicine for years on the patient psychiatry unit, mostly focusing on dietary examples, exercise, meditation, art therapy,” he continued. But some patients can’t participate due to medical issues, and Tomasi believes OVR Technology’s product could help reduce their pain, stress and anxiety.

Not all olfactory virtual reality scenarios are as wacky or surreal as the pizza-with-lawn-mower demo I experienced. Tomasi found OVR Technology’s woods-like demo so realistic that it was “really peaceful and nurturing. You could walk around, see the trees, see the landscape, the leaves and stones and rocks. You could pick up a marshmallow to roast, and you could have some water.”

Sometimes, users forget that they’re not in the real world. “Early on, we had a demo with a picnic table in it,” Wisniewski recalled. “People would become so immersed in the environment that, within a minute or two, they would try to lean on the picnic table and fall over.” After seeing a couple of people “hit the deck,” the company adjusted the demo to keep people safe.

Within the next month or so, Tomasi and OVR Technology will launch a pilot study to collect qualitative and quantitative data from 12 volunteer UVM Medical Center inpatient subjects on the therapeutic value of olfactory virtual reality. A lot of research went into the study, which the team is confident is the first of its kind worldwide in a psychiatric setting. “It is groundbreaking research,” Tomasi enthused.

A few other companies are also developing olfactory virtual reality, but OVR Technology’s current challenges stem from more immediate concerns than competition. Because the VR industry is evolving quickly toward faster and smaller headsets, the company is already designing a smaller version of the ION device. It’s also creating a “volume knob” to allow users to control the strength of scents delivered by the device.

Truth be told, I had a hard time smelling the tomato, basil and grass clippings in the demonstration. Though my brother’s nose made him a successful New York City sommelier, my sniffer thinks Bayley Hazen Blue is a lot like Brie left in the fridge too long. I’d have welcomed a way to control the scent intensity, as would others who’ve experienced OVR Technology demos, Flego said.

“It’s a lot like hearing: Different people hear different frequencies, and there are tons of factors that degrade over time,” Stein noted.

But the company is determined to make its technology seamless. In the long term, “we envision that the relationship between smell and virtual reality will become as ubiquitous as sound and television,” Wisniewski said.

His commitment to this goal stems in part from a cautionary concern. Culturally, we have deprioritized our sense of smell and sanitized our environment to include fewer scents, Wisniewski noted. He cited research showing that anosmia can lead to depression, anxiety and physical harm.

“If we continue down the path of being glued to screens and virtual reality, while ignoring this extremely important primal sense that has been refined over millions of years, the implications are kind of alarming,” he said. “We don’t have that many senses. You take away one, and I don’t see it going well.”