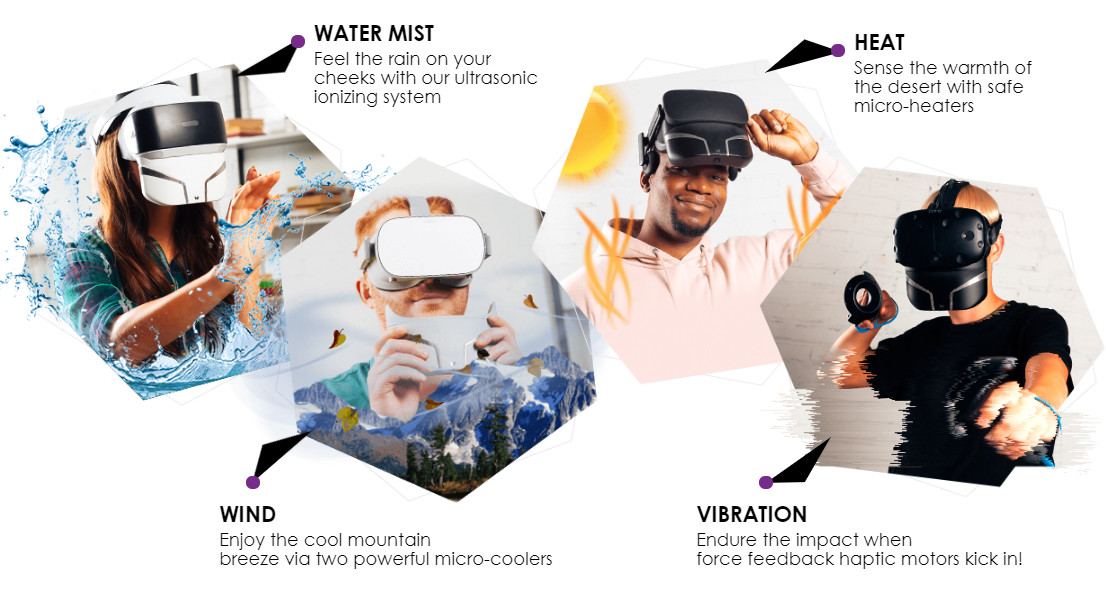 I don’t think even Ready Player One had the foresight to include smell-o-vision in its vision of the future, but now Ubisoft’s April Fool’s prank has become reality. FeelReal Inc has announced the FeelReal Sensory Mask, a way to smell gaming while in VR.

No, not actually gamers, but gaming. A way to smell the things you can see in games, whether that’s freshly cut-grass, the burning ash of Mordor, or, er, the gangrenous corpses of The Walking Dead.

The FeelReal Sensory Mask clips onto existing VR headsets such as the Oculus Rift, HTC Vive, and PlayStation VR, blasting lab-created scents up your nostrils as you explore a game world. They’re all safe to inhale, apparently, and are “similar to those used in the food industry”. I think that’s called ‘cooking’, but FeelReal probably knows more than me.

A grand total of 255 distinct scents have been created. They’re slotted into a scent generator which can hold nine individual aroma capsules. I’ll take a dozen of the ‘Dragon’ smell, please. It appears they can either be engaged manually or developers can use the FeelReal SDK for Unity and Unreal Engine to fine-tune precisely when their players catch a whiff.

But it’s not only olfactory delights that this bit of kit is good for. FeelReal has gone the whole hog and allows players to feel water mist, wind, heat, and vibrations. I still feel like I’m being duped and this thing isn’t actually real.

On the surface, it all sounds pretty neat, albeit heavily reliant on developer support. There’s the also the cost of the smell capsules to consider as well. Nobody wants to run out of ‘Rotting Flesh’ halfway through a Resident Evil 7 run.

The FeelReal Sensory Mask is coming to Kickstarter soon, where it’ll be available to pre-order.

Are you ready to take a big lungful of the future of gaming? What would be the best and worst-smelling games to use this for?

So, you can now SMELL the metaverse? | Creative Bloq

New Metaverse technology allows you to kiss and feel | WIONews

A beginner’s guide to chicken marketing in the metaverse | WATTPoultry

Virtual reality ‘exoskeleton’ will aid sex in the metaverse, expert reveals | The Sun

How to Run a Cooking School in the Metaverse | Futurist Speaker

Humans can feel differences in the chemical composition of a surface

Meals in the metaverse a new frontier for restaurants | Kindersley Clarion

Flavors can now be tasted in Augmented Reality | The Gal Times

Metaverse: The future of (Virtual) reality | The Financial Express

At Saint-Brieuc Hospital, virtual reality in the operating room | Brittany

What is the philosophical, ethical and social perspective of virtual reality? | Tech News Inc

A sense of touch could upgrade virtual reality, prosthetics and more | Science News for Students

Use of Virtual Reality in Horror Films | Analytics Insight

There are children playing in the streets who could solve some of my top problems in physics, because they have modes of sensory perception that I lost long ago.