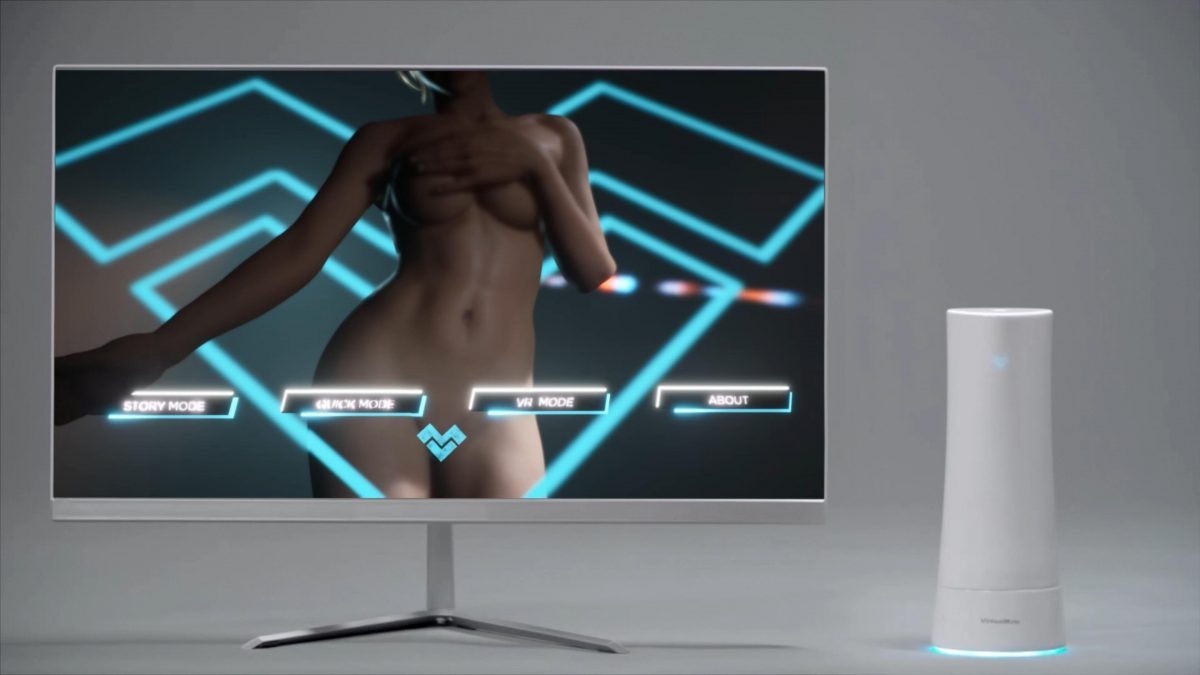 Is a self-warming virtual reality toy the future of sex? (Picture: VirtualMate)

Imagine a world where couples no longer got down and did the dirty. A world where we each stayed inside our own cubicles, VR headsets firmly on, headphones blaring while being quietly pleasured by an electronic, AI-powered sex toy. This could be the future. At least, if one San Francisco-based tech company has anything to do with it. Say hello to the VirtualMate system. ‘VirtialMate is real-time interaction with a life-like virtual character,’ Jeff Dillon, the company’s CEO and co-founder tells Metro.co.uk. Essentially, there are two parts to this adult-only system: a VR headset, through which men can watch digital recreations of real porn stars, and an electronic sex toy that moves in time with the action in the videos. Jeff says that this combination will offer users the ‘ultimate sensory experience’. ‘Real-time is the key here as all other attempts at this market are with pre-recorded content or a live cam model,’ Jeff explains. ‘With the advancements in AI our system will know the user’s name, habits, likes and dislikes. ‘What is real and what isn’t will be indistinguishable.

VirtualMate users can expect to see a familiar face or two. Famous adult stars including Jenna Jameson and Tera Patrick will be featured as part of the immersive experience. The digital renderings of the women are based on their golden eras and many modern-day performers have also come on board to lend their likeness. While guys are fully immersed in their VR sexual fantasies, their penises will be fully immersed in something called the ‘Core’. Think of it like an AI-powered fleshlight with sensors that know the user’s depth, speed and rhythm. So far, so life-like. But aside from all that sensual movement, the Bluetooth-connected toy has yet another feature that makes it feel like the real thing. It heats up in an instant. Neat. ‘Having a warm body temperature sex toy is a night and day difference,’ says Jeff. ‘It’s what makes it feel real.

Yes, it’s self-warming (Picture: VirtualMate) ‘Traditional warming methods are cumbersome and not effective at retaining heat for ten minutes as most people just soaked their toy in hot water. Not partial. We came up with a self-warming system that warms the core with a flick of a switch.’ Okay, let’s deal with the elephant in the room. If men are sticking their dicks in a self-warming core and watching real-time renderings of porn stars via VR, where does that leave the rest of us? Could this futuristic sex toy be a replacement for real-life sexual intimacy? Jeff certainly hopes so. ‘Traditional intimacy isn’t for everyone,’ he tells us. ‘It is broken and not getting any better, but until now it was hard to replace the real thing so for people who have intimacy issues it became a big point of frustration and depression. ‘This system will help some people get over intimacy issues so they are comfortable interacting with a partner in an intimate setting. ‘Just using this as a training add could be huge for people. We will hope to help people who struggle with traditional intimacy as well as train others to help them perform better.’ The system works with a VR headset and a responsive toy. It doesn’t end there.

Dillion also claims that the toy will help prevent climate change. Yes, you read that correctly. Because — of course — fewer people having actual sex, the fewer babies will be born around the world. Sound logic there. ‘If you look at this from a sustainability perspective reducing the birth-rate will help climate change and long term sustainability,’ he says. ‘So there is that.’ MORE: SEX Woman rejected by Tinder date who isn’t ‘ready for charcuterie date’ These are the most right-swiped people on Tinder this year 83-year-old grandma loves using Tinder to find younger men for casual sex Think that the VirtualMate will make the perfect gift this year? The official crowdfunding for adult-only system launches on Indiegogo.com this week. If all goes well, some lucky British guys may find a sexy surprise in their stocking this year. ‘We will ship to the UK from day one which is targeted for 1 December,’ says Jeff. ‘Just in time for the holidays.’ Oh, and don’t worry ladies. Next year, Dillion says the company plans to cater to women with the VirtualMate for Females. While he didn’t give any details of how the women-friendly system would look, we can use our imagination. The mind boggles.

“Art and science aren’t disconnected to me…personally, my mission is to connect them.”

“Art and science aren’t disconnected to me…personally, my mission is to connect them.”