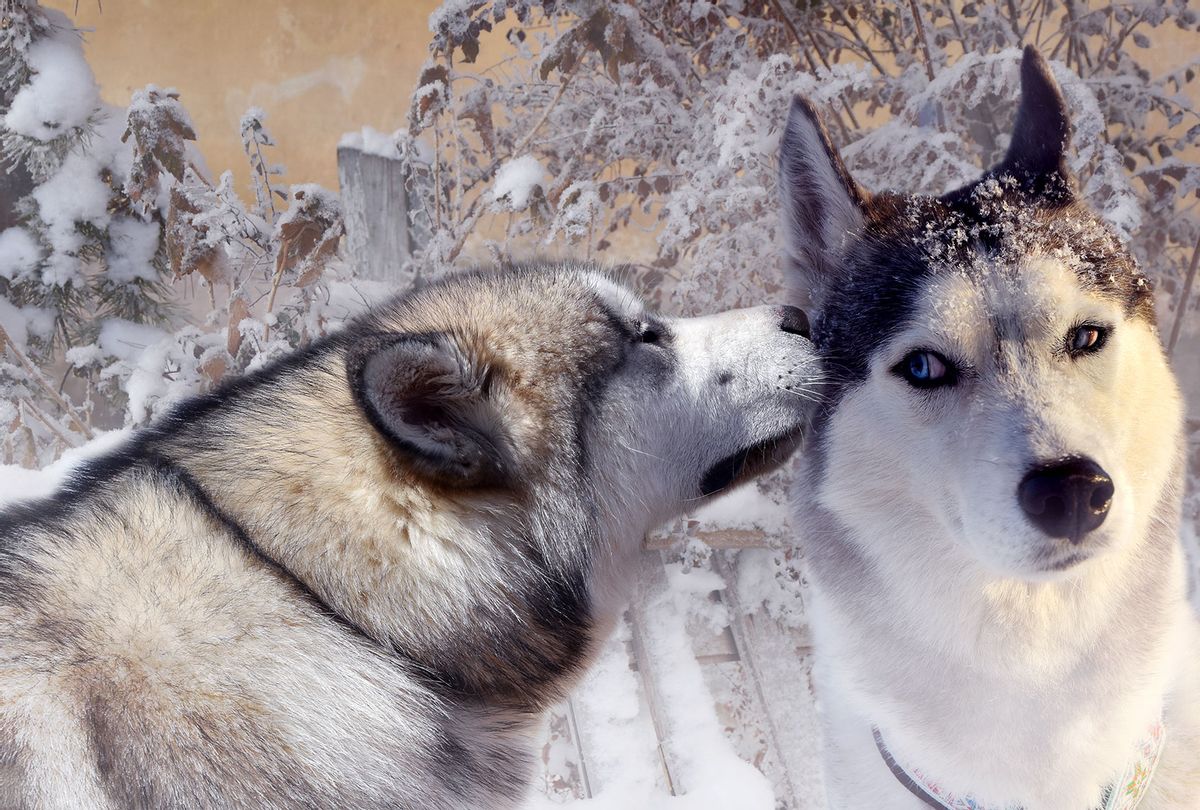 Your dog has a rich interior life it’s not telling you about | Salon.com

Dogs and humans have co-evolved to the point that we can intuit some of each other’s behaviors, such as the desire to go on a walk or the need to use the bathroom. But because our canine friends seemingly cannot convey complex thoughts (to us), their interior lives, thoughts and dreams — or lack thereof — remain mysterious to us humans. What are they saying when they bark at each other? How do they feel when they look at us while panting, or lick us with what seems to be affection? What are they thinking when they sniff random objects — or each other’s butts?Or are they even thinking anything?

Even something as seemingly simple as a bark masks a much more complicated meaning.

“They bark primarily when they are alarmed or excited about something, and this is also the context in which their ancestors, wolves, tend to bark, though barking in wolves is less common and much more subdued,” Dr. James A. Serpell, Professor of Ethics & Animal Welfare, University of Pennsylvania School of Veterinary Medicine, told Salon by email. Hence, barking may serve as a warning to others about a possible threat or danger, making a threat themselves (such as to that pesky mailman) or expressing sympathy for other dogs barking about possible threats or dangers.

“Humans are able to detect differences in some (but not all) dog barks and could often correctly identify the situation the dog was in based solely on its bark (e.g., was it barking at an intruder or was it a happy playful bark),” Feuerbacher explained.

And while humans don’t understand the context and meaning of these barks, their fellow canines likely do. Studies appear to confirm that.

“Few studies have looked at whether other dogs can gain information from the barks of other dogs, but they do seem to respond differently when they hear a bark from a dog barking at a stranger or a dog barking while alone, and they seem to be able to detect individual differences in who the barking dog is,” Feuerbacher said. “They respond differently to familiar and unfamiliar dogs.”

And when it comes to communication, dogs aren’t as voice-centric as humans. In fact, they often use body language.

“Dogs communicate primarily through body language,” Dr. Catherine Reeve, a lecturer on animal welfare and behavior at Queen’s University Belfast’s School of Psychology, wrote to Salon. “A lot of this communication is subtle and goes unnoticed by most owners.”

When dogs bark at each other, according to Reeve, it can mean anything from a request for personal space or desire for play to communicating that it is frustrating about being stuck on a leash.

That said, dogs do not primarily communicate through barking or body language, but olfaction — their sense of smell.

“When sniffing one another, dogs are getting all the information they need about other dogs’ sexual status, health status, age, etc.,” Reeve told Salon.

As Serpell pointed out, canine noses are so sensitive to odors that it is difficult for humans to even conceive of how their perception of reality differs from ours.

“It is hard to fully imagine the world from a dog’s perspective, but not impossible,” Serpell explained. “Humans, after all, possess a sense of smell, even if it is greatly inferior to that of dogs. So while we derive most of the information about the world around us through our eyes and ears, dogs can access an additional layer of information via their noses that we are essentially ‘blind’ to.”

On the other hand, because dogs have poor color vision, our eyes are able to process realities that they are literally blind to.

“I think one of the features they use to identify individual humans or dogs is odor,” Feuerbacher wrote. “I had a dog who had reactivity issues and she occasionally would show affiliative behavior to someone that she didn’t know (which was strange for her) and once she smelled them, they didn’t smell like anyone she knew and then she would bark. We see dogs that don’t like going to see veterinarians do the same thing—if you smell like a vet, they might not respond as well to you.”

This, incidentally, may be part of the reason why some dogs will seem to inexplicably hate other dogs or people, even if they’ve never met them. They may smell something “off” about that individual that their human friend doesn’t notice. This may sound like a recipe for trouble, but the reality is that if you want your dog to be happy, you should let your canine companion sniff out the world.

“Because of the importance of scent to them, I let my dogs do a lot of sniffing on our walks and hikes,” Feuerbacher told Salon. “It’s great enrichment for them. Alexandra Horowitz, at Barnard College, has written about the importance of letting our dogs sniff. As to how we can start to relate to our dogs, she actually got down on her knees and tried to smell where her dog was smelling to try to understand the richness of these experiences for them.”

That richness of experience even extends to the doggie behavior that perhaps causes the most chagrin to human owners: sniffing other dogs’ butts.

“Dogs have scent glands around their butts that convey information about the individual,” Serpell explained. “Butt-sniffing is therefore the canine equivalent of small talk; a way of getting to know more about somebody you’ve just met.”

Other disgusting dog behaviors — like eating feces, vomit, insects and other gross things they casually stroll past — also have grounded scientific explanations.

“They evolved as scavengers and are omnivores so this likely is carried over from that—finding smelling things reinforcing is useful in finding food (dogs will often eat gross things—protein is protein!), finding mates, and knowing if there are other dogs or predators nearby,” Feuerbacher wrote to Salon.

Many dog behaviors stretch back to their days as wolves. When your dog finds a bone or a toy that it really likes, it will bury that object. This is because its DNA is still encoded with instructions from its ancestors’ days in the wild.

“Dogs bury things (including food inside the home when there is no dirt) because it is a leftover behavior pattern from their wolf ancestry,” Reeve explained. “Behavior patterns are kind of like an automatic series of behaviors that are elicited, or ‘set off,’ by a particular stimulus.” When your dog buries something, it is engaged in a behavior called “caching” intended “to preserve valued items much like a wolf would bury prey they’ve killed but not eaten in full. Our dogs will do this with their food, toys, and treats because they are highly valued items.”

This brings us to perhaps the most important question for dog pals: How can we figure out whether our dog likes us or not?

“To understand what our dog is likely feeling, we really need to pay attention to many parts of the dog,” Feuerbacher told Salon. “If they are lip licking, excessively panting, avoiding our gaze, showing us the whites of their eyes, tucking their tail, cowering and a myriad more behaviors, they are likely stressed and uncomfortable. We typically want to see a dog that is balancing it’s weight nicely on all four legs (not leaning back or forward), with easy rhythm of breathing, maybe a loose wagging tail, a loose body (no tension), head not carried abnormally high or low, and soft eyes to know they are comfortable.”

Feuerbacher added, “We might get more energy and excitement when our dog is really happy, such as when we grab the leash for a walk.”

Serpell made similar observations, noting that “dogs sometimes lick their owners affectionately, just as wild canids often groom other members of their families or social groups.”

He also answered the question posed in “The Secret Life of Pets” — namely, what dogs do when we are out of the house. Do they throw giant parties and have zany, madcap adventures?

Probably not. As Serpell told Salon, they are “mostly sleeping, unless the dog suffers from separation anxiety, in which case it may be destroying the interior of your home or driving your neighbors crazy by barking and howling.”

Matthew Rozsa is a staff writer for Salon. He holds an MA in History from Rutgers University-Newark and is ABD in his PhD program in History at Lehigh University. His work has appeared in Mic, Quartz and MSNBC.

Source: Your dog has a rich interior life it’s not telling you about | Salon.com