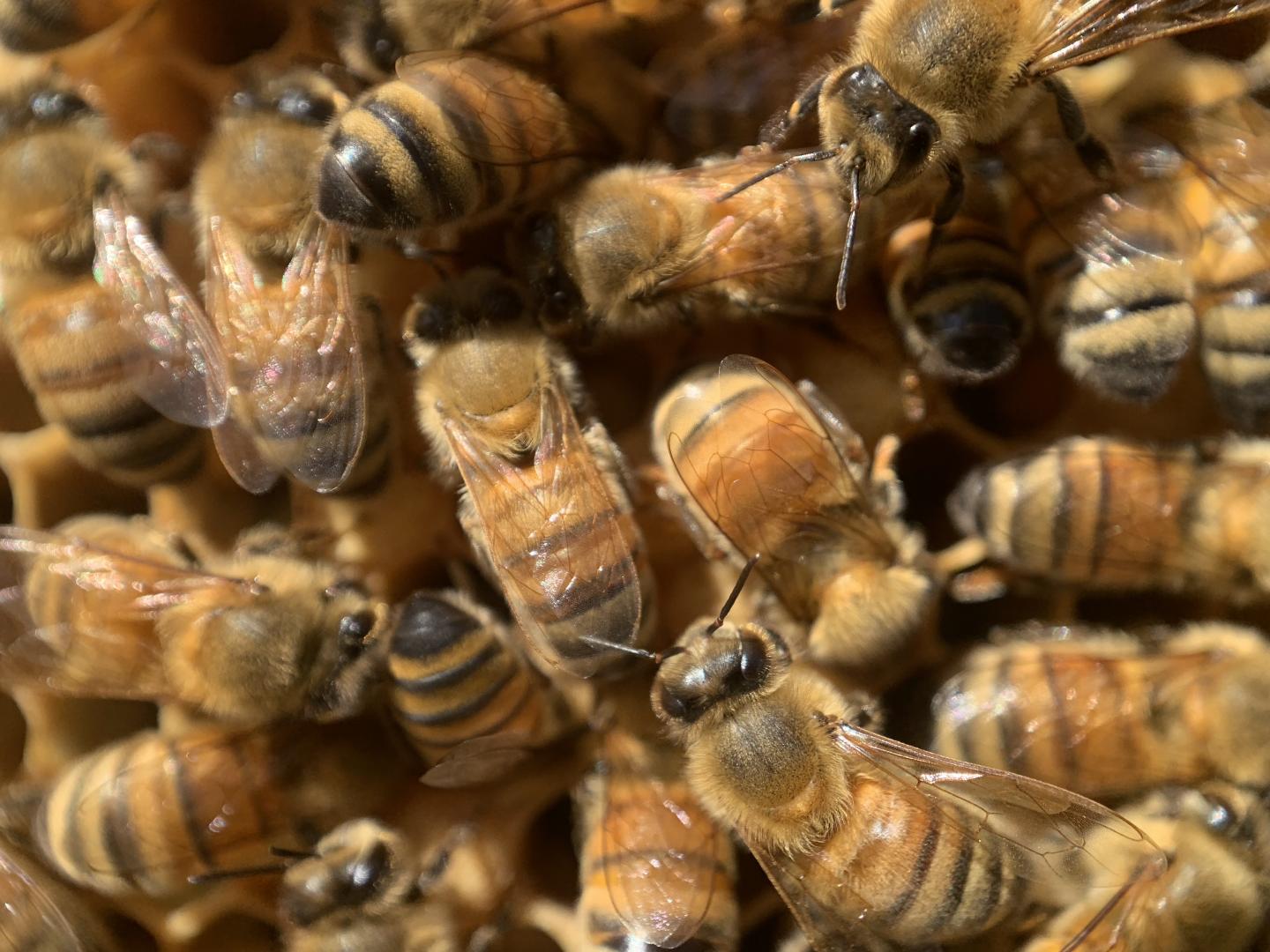 Honeybees play a scent-driven game of telephone to guide members of a colony back to their queen, according to a new study led by University of Colorado Boulder. The research, published today in the Proceedings of the National Academy of Sciences, highlights how insects with limited cognitive abilities can achieve complex feats when they work together–even creating what looks like a miniature and buzzing version of a telecommunications network.

The findings also serve as a testament to a honeybee’s love for its queen. These matriarchs are the most important members of any hive: They’re the only females able to reproduce. Queens, like other members of a colony, can also communicate using pheromones, or small and odorous molecules that bees produce through special glands.

“It’s very important for the bees to know where the queen is and to stay close to her,” said study author Orit Peleg, an assistant professor in the BioFrontiers Institute and Department of Computer Science at CU Boulder.

Pheromones, which are too small for scientists to observe directly, can only travel so far before they dissipate into the air.

So bees get creative to pass the messages along. Drawing on experiments with live bees and computer simulations, or models, Peleg and her colleagues discovered that when a queen starts sending out pheromones, nearby insects take note. They stop what they’re doing, start making their own pheromones, then transmit those scents to friendly bees that are farther away.

“There are many examples of animals, like ants, who lay pheromones in their environments,” Peleg said. “But those pheromones just disperse passively by the laws of physics. Here, the bees are actively directing that signal.”

That conclusion, she added, came about from a chance observation. During a previous study, Peleg and her colleagues were tracking how honeybees form giant swarms–or undulating blobs made up of thousands to as many as 100,000 bees.

In the process, the researchers spotted something strange. As the honeybees in their experiments gathered around a queen to build a swarm, large numbers of them began to engage in what scientists call the “scenting” behavior. They stuck their hind ends into the air and beat their wings furiously.

“When they fan their wings, they’re drawing air over their pheromone glands, blowing those molecules away,” Peleg said.

She and her team wanted to know what was behind this insect version of twerking.

To do that, the group set up a video camera in an arena and recorded bees in the process of forming a swarm. The researchers then analyzed that footage using machine learning tools that automatically tracked the locations and orientations of the bees in a colony.

The team discovered the bees didn’t seem to spread their scent randomly.

“The signal is broadcasted in a particular direction, and that direction tends to be away from the queen,” Peleg said.

Picture an insect phone tree: The bees closest to the queen catch whiff of her smell molecules, then blow their own pheromones to the bees behind them. That next layer of bees passes the message on in turn, and the chain continues until every bee in the colony is in on the secret.

“It almost resembles a telecommunications network where you have antennas that are talking to each other and amplifying the signal so that it can reach farther away,” Peleg said.

Dieu My Nguyen, lead author of the study, noted that at the height of this communication frenzy, a hive’s messenger bees mostly spaced themselves evenly across an arena.

“The distances between the scenting bees were very uniform,” said Nguyen, a graduate student in computer science at CU Boulder. “That suggests that there is some sort of concentration threshold over which pheromones are detectable, and that the bees were responding to that.”

Peleg, Nguyen, and their colleagues say that there is still a lot that they don’t know about how these communications networks work. Do only some bees, for example, transmit messages for the queen, or can all members of a hive sniff and fan when it suits them? For now, the team is happy to get a new whiff of the social lives of these curious insects.

“We got a few bee stings,” Nguyen said. “But it was worth it for those nice movies.”

Other coauthors on the new study include CU Boulder graduate student Michael Iuzzolino and undergraduate student Aaron Mankel. Katarzyna Bozek of the Cologne University Hospital and Greg Stephens of the Okinawa Institute of Technology and Vrije Universiteit Amsterdam also contributed to this research.