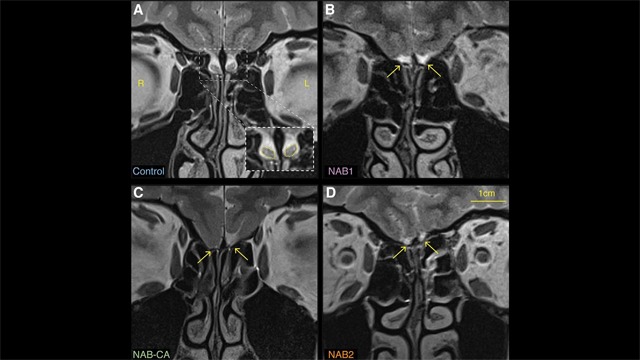 The People Who Can Smell Without Any Olfactory Bulbs | Technology Networks

Our sense of smell depends on the transmission of olfactory information from the nose to the olfactory bulb in the brain through the olfactory nerve. And without olfactory bulbs, smell isn’t possible–or so scientists thought.
A team of researchers have uncovered a sliver of the population who have no apparent olfactory bulbs yet can somehow still smell. Extensive tests of two of these people proved they could identify, detect, and discriminate between odors as well as the average person, according to a paper published in the journal Neuron.

If humans don’t need olfactory bulbs to smell, the brain may have more plasticity, or ability to adapt, than previously thought.

“The developing human brain can overcome significant alterations with minimal functional impact, and this may be one example of them,” said Noam Sobel, senior author of the study. “Under this conservative interpretation, our discovery does not teach us how olfaction does work, but rather only how olfaction can work.”

People with no olfactory bulbs typically suffer from anosmia, or an inability to smell. During olfaction, odor molecules activate sensory neurons in the nose. Those neurons then send signals to the brain where each odor is mapped in activation patterns of small neural structures called glomeruli within the olfactory bulb. These glomeruli maps are considered essential to smell.

“Replication within a publicly available dataset adds a lot of credibility to the finding. This is not just some oddity that shows up only in our hands,” says Sobel.

In hopes of finding a physical explanation, the researchers ran even more scans of the original two volunteers and of a 33-year-old woman with no identifiable olfactory bulbs and congenital anosmia. After MRIs, diffusion MRIs, ultra-high definition 3D imaging, and whole-brain voxel-based morphometry, they concluded that yes, all three of the women had no visible olfactory bulbs but otherwise normal brain structures outside the olfactory system.

The three volunteers also agreed to smell tests. These included subjective tests and objective tests that measure whether someone can pick up a scent, can identify scents, and can distinguish between scents. The two women who said they could smell performed within the norm for people their age while the woman with congenital anosmia failed to detect most odors.

The researchers then wanted to explore how the world smells to these individuals. They asked the three volunteers and 140 women of similar age to smell 10 odorants and use visual analogue scales to rate each odor by 11 descriptors. This generated enough data points to create an olfactory perceptual fingerprint that visually and numerically represents how each person perceives scents. The olfactory perceptual fingerprints of the two women who could smell without apparent olfactory bulbs fell within the norm of the study. Yet, the two women were unusually similar to each other in their smell perceptions, ranking closer than 96 percent of any other two participants.

“The simplest interpretation of our findings is that these women were born without an olfactory bulb, but thanks to the extreme plasticity of the developing brain, they developed an alternative glomeruli map somewhere else in the brain, not in the olfactory bulb,” says Sobel. “Although such plasticity is amazing, it is not out of the realm of what we have seen in human development.”

In future research, Sobel and his colleagues would like to screen larger numbers of people to learn more about this phenomenon. Moreover, given that people can smell without typical olfactory bulbs, they are investigating whether congenital anosmics can learn to smell.

Source: The People Who Can Smell Without Any Olfactory Bulbs | Technology Networks

Searching for sense: what we lose when smell deserts us | New Statesman

Want to Smell Like Travis Scott and Taylor Swift? There’s a Candle for That | Esquire

Ravers are really missing the smells of nightclubs | Mixmag

Tales Of Our Times: Some Magic In The Works Is ‘Electronic Nose’ Technology | LA Daily Post

The Many Ways COVID Changed Our Relationship to Smell | The Kit

My Chemotherapy Treatments Gave Me a Superpower | Cure today

I think listening to music from your youth is as powerful as a scent passed beneath your nose.

I think listening to music from your youth is as powerful as a scent passed beneath your nose.