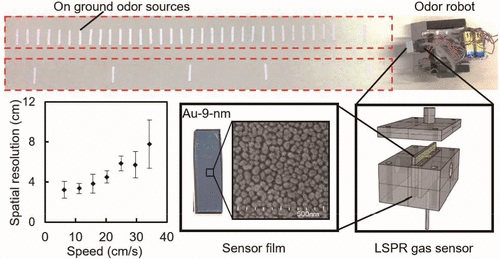 This Scent-tracking Robot Can Follow Odors over Great Distances | Electronics360

Bloodhounds are famously known for their ability to track scents over great distances.

Researchers at Kyushu University have developed what they call the modern-day bloodhound in the form of a robot that can rapidly detect odors from sources on the ground, such as footprints.

While most robots can only detect airborne odors or are extremely slow at performing analyses, this odor robot equipped with a high-speed gas sensor can rapidly track invisible odor sources and could potentially even read a message written on the ground using odors as a barcode.

The method is based on a technique called localized surface plasmon resonance (LSPR) that measures changes in light absorption by gold nanoparticles upon exposure to a gas. As the robot travels along the surface, a tube placed close to the ground detects the location of ethanol odor sources placed at different positions along the robot’s path.

In this case, the robot could read the word “Odor” in binary barcode deposited on the ground as a series of ethanol marks at different positions. Researchers said the robot has potential in a multi-robot communication system or as a security robot working in an office.

The full research can be found in the journal ACS Sensors.

Bacon-scented wrapping paper is a thing: Here’s how to get it | pennlive.com

What Lies Beneath: Olfaction in the Time of COVID-19 | Emergency Medicine News

Why are we obsessed with food scented candles during the holidays? | Foodsided

“Rain usually makes me feel mellow. Curl up in the corner time, slow down, smell the furniture. Today it just makes me feel wet.”

“Rain usually makes me feel mellow. Curl up in the corner time, slow down, smell the furniture. Today it just makes me feel wet.”