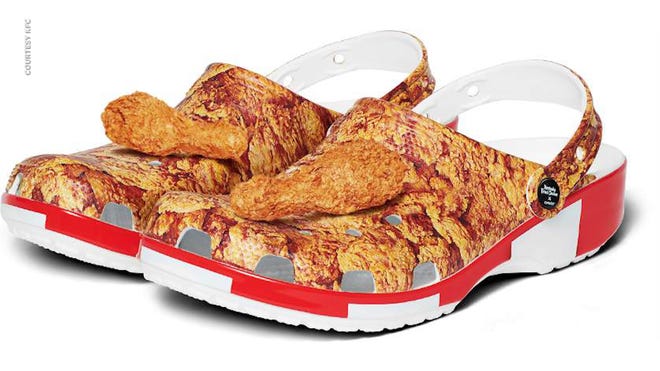 By msensory team05/08/2020No Comments
In a parallel world, your date slips on some KFC Crocs, lights a Quarter Pounder candle and sprays some Whopper perfume before greeting you at the door. You walk into the house and your nose is transported to a food court.

KFC, Burger King and McDonald’s are no strangers to a good marketing gimmick. With scented shoes, perfume deals or candle sets, the fast-food chains are placing their bets on their iconic scents – good or bad.

KFC is the latest chain to delight the senses with its limited-edition Kentucky Fried Chicken X Crocs launched on Tuesday. The fried chicken-inspired footwear, fully scented, went on sale for $59.99 and sold out in under 30 minutes, according to a spokesperson.

“Combining the unmistakable look of our world-famous fried chicken and signature KFC bucket, with the unparalleled comfort and style of Crocs, these shoes are what fried chicken footwear dreams are made of,” said Andrea Zahumensky, chief marketing officer for KFC in the U.S.

But another burger joint had already beat them to the olfactory punch. In 2015, Burger King held a one-day sale of “Flame-Grilled Fragrance” in Japan going for around $40. The company toyed with a similar scent in 2008 with “Flame by BK,” although that fragrance reportedly went for much lower at around $4.

“For now, we’ve only produced 110 bottles of Eau de Pizza Hut, but who knows what the future has in store,” said Beverley D’Cruz, Marketing and Product Development Director, Pizza Hut Canada in a 2012 press release. “The good news is people can enjoy the great smell of fresh Pizza Hut pizza any day of the week by ordering one of our signature crust pizzas.”

As is the case with all these scented products, they are commonly used to bolster brand recognition and provide an asset to the companies’ close followers, thus the limited productions.

In the latest case, KFC and Crocs went a step further, and for every pair of Crocs sold, KFC is donating $3 to the KFC Foundation’s REACH Educational Grant Program, which helps employees at participating KFC U.S. restaurants further their education through college scholarships.

Dogs can smell everything and more. Even diseases like cancer | The Print

Scientists on the scent of flavor enhancement: Researchers study sense of smell to optimize food for consumption | Science Daily

The Scent of Danger Makes These Fish Hulk Out | Hakai Magazine

The smell of art | Apollo Magazine

Predating the Internet and predating videos, you had an active imagination. You would hear sounds and then get mental pictures of what these sounds felt like to you. It engaged you and made you more invested in it. It made you want to get tickets to the show, buy the album, put the poster on the wall. Now it’s sensory overload.

Predating the Internet and predating videos, you had an active imagination. You would hear sounds and then get mental pictures of what these sounds felt like to you. It engaged you and made you more invested in it. It made you want to get tickets to the show, buy the album, put the poster on the wall. Now it’s sensory overload.