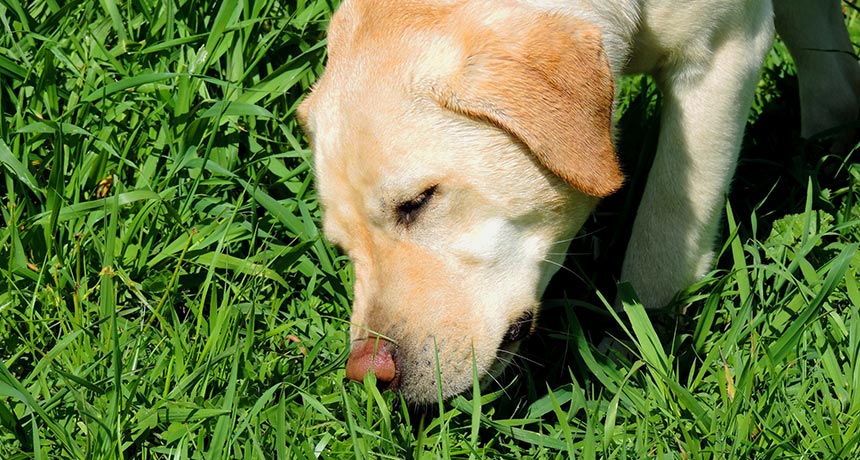 ALTERED ODOR  Being stressed or afraid may alter a person’s usual scent and throw dogs off the person’s track. People with a particular version of a gene may have a bigger change in odor when stressed, a study suggests.

Some police dogs may smell fear, and that could be bad news for finding missing people whose genetic makeup leaves them more prone to stress.

Trained police dogs couldn’t recognize stressed-out people with a particular version of a gene that’s involved in stress management, geneticist Francesco Sessa reported February 22 at the annual meeting of the American Academy of Forensic Sciences. The dogs had no trouble identifying the men and women volunteers when the people weren’t under stress. The study may help explain why dogs can perform flawlessly in training, but have difficulty tracking people in real-world situations.

Sessa, of the University of Foggia in Italy, and colleagues wondered whether fear could change a person’s normal scent and throw off dogs’ ability to find missing people. The researchers also investigated whether people’s genes might make some individuals easier or harder for dogs to pick out of a lineup.

Previous studies already had linked different versions of the serotonin transporter gene SLC6A4 to stress management. People with the long version of the gene tend to handle stress better than people with the short version, Sessa said.

He and colleagues recruited four volunteers — a man and a woman who each have the long version of the gene and a man and a woman with the short version. Each of the participants wore a scarf for a couple of hours a day to imprint their scent on the garment. Then the researchers brought the volunteers into the lab. In the first session, the volunteers wore a T-shirt and weren’t subjected to any stressors. The team then created two lineups of T-shirts, one with those of the men and another for the women. After sniffing the scarves, two trained police dogs had no trouble identifying any of the volunteers in a lineup of 10 T-shirts. The canine units identified each of the volunteers in three out of three attempts.

Next the researchers stressed the volunteers by having them do public speaking. The participants’ hearts raced and their breathing became shallow, a sign that people were scared, Sessa said.

That stress may have made their body odor change, too, confusing the dogs. The animals picked stress-stained T-shirts belonging to the man and woman with the long version of the gene from the lineup in two out of three attempts. But neither dog could identify the stressed people with the short version of the gene, suggesting that those people’s natural scent changes more under stress.

The researchers need to confirm their findings in a larger study, Sessa said. And the team hasn’t yet analyzed how being scared or stressed changes body odor.

“It could be a plausible explanation” for why dogs can find some people more easily than others, says criminologist and forensic scientist Cliff Akiyama, founder of Akiyama and Associates, a forensic consulting company headquartered in Philadelphia. “Our bodies respond to trauma very differently,” he says.

Fear can set off a flood of stress hormones that make some people freeze, others fight and yet others flee. It seems reasonable that the same hormone flood could alter a person’s scent, Akiyama says. But that doesn’t mean dogs are useless in finding missing persons. Many people are kidnapped by parents, relatives or other people the victims know, he says. So abductees aren’t always afraid of their abductors, perhaps leaving their scents unaltered.

Source: Genes might explain why dogs can’t sniff out some people under stress

Your body’s hidden language: How smell reveals more than you ever knew | New Scientist

If you like vanilla, you’re not going to like ‘Breaking Bad’ – you need to like a specific flavor that is unusual, that is different, that takes risks.

If you like vanilla, you’re not going to like ‘Breaking Bad’ – you need to like a specific flavor that is unusual, that is different, that takes risks.