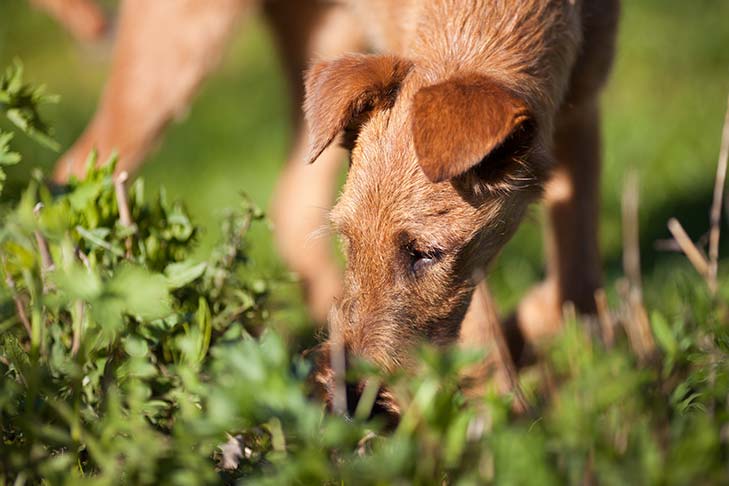 The Nose Knows: Is There Anything Like a Dog’s Nose? | American Kennel Club

By msensory team22/07/2020No Comments
Have you ever opened a jar of peanut butter and watched your dog come running from 50 yards away? Or seen your dog sniff out a tasty morsel in a five-acre field? These are just two examples of the incredible sense of smell that dogs have. Their noses are at least 100,000 times more sensitive than ours. In fact, smelling could be called the dog’s superpower. Not only does he have more olfactory receptors than humans, the dog’s snout is structured in such a way that, while he is sniffing out odors, he doesn’t exhale and disturb even the faintest of scents. And the part of the brain that processes smells is seven times larger in dogs than in humans.

Over centuries dogs helped humans hunt and forage, protected home and family, and worked alongside us. Within the last hundred years or so they’ve been trained to use that nose to help in a variety of other ways:

The downside is that there are a limited number of dogs that are trained to sniff out explosives or disease and training is extremely expensive; it can cost up to $25,000 to train just one dog. There’s already more demand than supply in the military and law enforcement. And dogs don’t easily fit into a hospital or other medical facility settings. In short, dogs aren’t scalable. So it’s only natural that scientists would want to try to replicate this extraordinary ability with mechanical, technical, or synthetic materials. 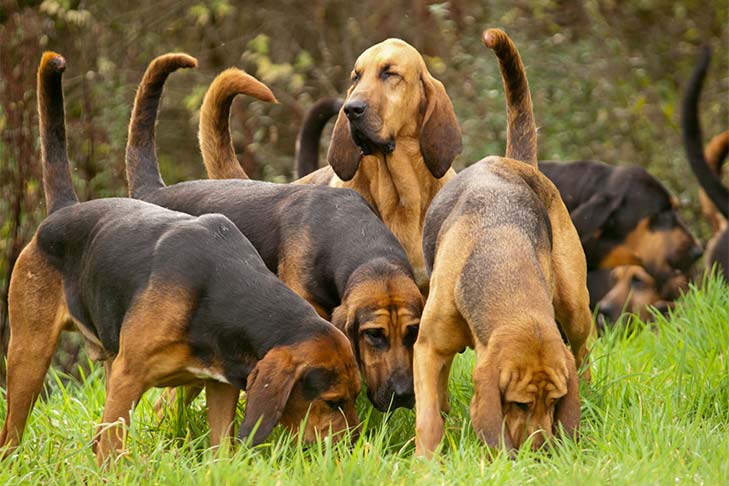 Can science build a dog’s “nose?”

Some of the most interesting work has been done at MIT, where physicist Andreas Mershin, in collaboration with his mentor, Shuguang Zhang, have tried to determine how a dog’s nose works and then create a robot that can replicate the process. The first difficulty is in figuring out exactly how smell works and then how the brain processes the information, since it’s been the least studied of our senses. Mershin set out to build an artificial nose, which would then lead us to understand how that nose works.

With a great deal of trial and error, Mershin and his team created the Nano-Nose, perhaps the first successful effort at artificial olfaction. It successfully passed rigorous testing by DARPA and, in the process, taught the scientific world a great deal about how dogs process scents. Still, the Nano-Nose is only a detector, the same way a carbon monoxide detector is. What Mershin is ultimately aiming for is the machine’s ability to interpret the data it receives and identifies. Wired did some excellent in-depth reporting on this, for those who want to dig into the science.

Currently, one start-up, Aromyx, is trying to harness artificial olfaction for commercial use. The company wants to put all 400 human olfactory receptors on to a chip, in contrast to the Nano-Nose, which uses only about 20 customized receptors, depending on its intended use. The ultimate goal, whether in the academic labs or the commercial world, is to build something that will react identically to scent as a dog’s nose does. And it may not be far off. 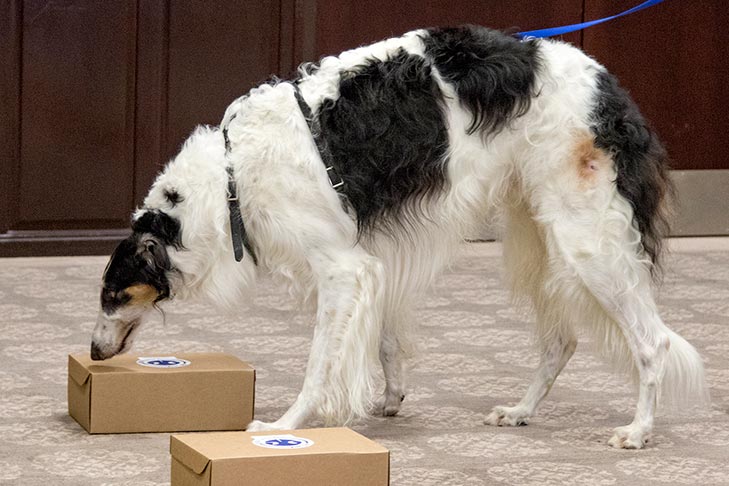 AKC Scent Work is a great sport for dogs who love using their noses.

But do dogs have the best noses?

Not necessarily. There are several other animals with a superb sense of smell and, surprisingly, even humans are pretty good at it. As mentioned before, smell has always been considered the least important of our five senses, but that may be an over-simplification. A small study in Sweden that tested the smelling ability of spider monkeys, mice, and humans showed that humans are as capable, if not more so, of smelling certain specific scents, including some flowers, human blood, and surprisingly, bananas.

Elephants are considered to have the most acute sense of smell, with the largest number of scent-detecting genes. According to a study done in 2007, elephants can even smell the difference between human tribes in Kenya: one tribe, the Maasai, hunt and kill elephants, the other tribe, the Kamba, do not. That reinforces the idea of smell as a survival skill.

Bears also surpass dogs and are thought to have the widest-ranging sense of smell. Even though their brains are two-thirds smaller than ours, their sense of smell is over 2000 times better. For instance, a polar bear can smell a sexually receptive female bear from as far as one hundred miles away. Rats and mice are also well-known for their scenting ability.

In the insect world, the silk moth has the best sense of smell, with scent receptors in its antennae. A male silk moth can smell a female silk moth six miles away, based on just one pheromone scent particle. And in water, the white shark has the largest olfactory center of all sharks and can smell even one drop of blood over a mile away.

Since it’s unlikely any of us will ever have an elephant, bear, shark, or moth as a companion, for humans, the dog’s sense of smell is the most compelling and useful. No other species provides the life-saving services that dogs do, simply by virtue of their remarkable ability to sniff out both sustenance and danger.

Source: The Nose Knows: Is There Anything Like a Dog’s Nose? – American Kennel Club

Delight Your Senses of Sight, Smell, and Touch With Multisensory Home Decor | Popsugar

‘Private label is on the war path, so everything matters’: Double down on sensory appeal to reward consumers, brands told | Food Navigator

Magnum ice cream and Nails.INC teamed up to launch ‘chocolate-scented’ nail polish — and the colors are also really pretty | Yahoo

A whiff, sound and taste of Christchurch: New exhibition uses senses to reimagine the city | Stuff.co.nz

The Benefits of Wine Include Activating Multiple Brain Regions | Now

Multi-Sensory Approach Benefits Communication With Those Living With Dementia | UKNow

New Metaverse technology allows you to kiss and feel | WIONews

A beginner’s guide to chicken marketing in the metaverse | WATTPoultry

Why does the lizard stick his tongue out? The lizard sticks its tongue out because that’s the way its listening and looking and tasting its environment. It’s its means of appreciating what’s in front of it.