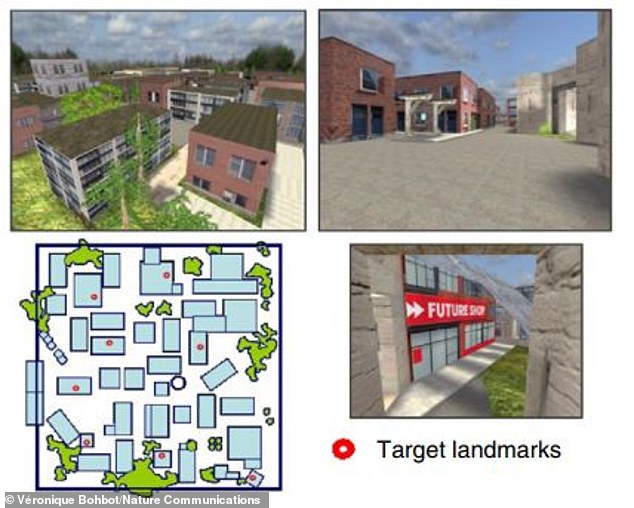 A group of 57 volunteers participated in an experiment which assessed the proficiency of their nose as well as their sense of direction. They were tasked with identifying different odours and navigating around a virtual town using only landmarks as part of a ‘wayfinding’ task (pictured)

When asking for directions, you should look for someone with a good sense of smell.

That is the advice of scientists who have found that people with a naturally good sense of direction also have a heightened ability to detect faint odours.

Brain scans revealed two specific regions of the brain that are heavily involved in the control of both skills.

Veronique Bohbot from McGill University in Canada led a team of scientists to determine if there was a link between the two very different traits.

A group of 57 volunteers participated in an experiment which assessed the proficiency of their nose as well as their sense of direction.

They were tasked with identifying different odours and also navigating around a virtual town using only landmarks as part of a ‘wayfinding’ task.

The authors explain in their paper: ‘To evaluate navigation, we used two tasks. One is a wayfinding task, which measures the ability to build and use a cognitive map of a virtual environment containing landmarks (e.g., pool, shops, etc.), and which therefore requires using spatial memory.

‘This type of spatial memory task has been shown to rely on the hippocampus.’

Using MRI scans, the authors found that increased thickness of the left medial orbitofrontal cortex (mOFC) and volume of the right hippocampus of the brain predicted better performance on both tasks.

WHAT PARTS OF THE BRAIN ARE INVOLVED IN MEMORY?

Memories are formed and recalled in the cerebral cortex, the outer part of the brain responsible for higher mental functions. The cortex is made up of four lobes. Two of those, the frontal and temporal lobes, are responsible for memory.

The prefrontal cortex handles short-term memory. It can store about seven pieces of information at a time for about one minute.

The temporal lobe processes visual information and store it for long-term memory and recall.

The medial temporal lobe holds and recalls facts and events, packaged in ‘episodes’ that allow us to remember  them as points in time.

The hippocampus is a part of the medial medial temporal lobe and allows us to convert short-term memories into long-term ones, making it important to learning.

The basal ganglia are also important to learning, by allowing us to recall steps of procedures or processes.

The authors point out that although the mOFC has previously been linked with olfaction but the region has not yet been demonstrated to be critical in spatial memory.

Researchers followed this research up with further tests that looked at a group of nine patients who had suffered brain lesions affecting the mOFC.

When these people performed smell-based tests and navigation tasks they perfomed poorly in both.

The scientists claim this link was not found in people who had a fully functional mOFC.

It has previously been linked to the cognitive processing of decision-making and is found at the front of the skull, directly behind the eyes.

The hippocampus is widely regarded as central to many of the higher functions in the human brain such as memory.

Source: People with a good sense of smell are better at navigation

Scientists on the scent of flavor enhancement: Researchers study sense of smell to optimize food for consumption | Science Daily

The Scent of Danger Makes These Fish Hulk Out | Hakai Magazine