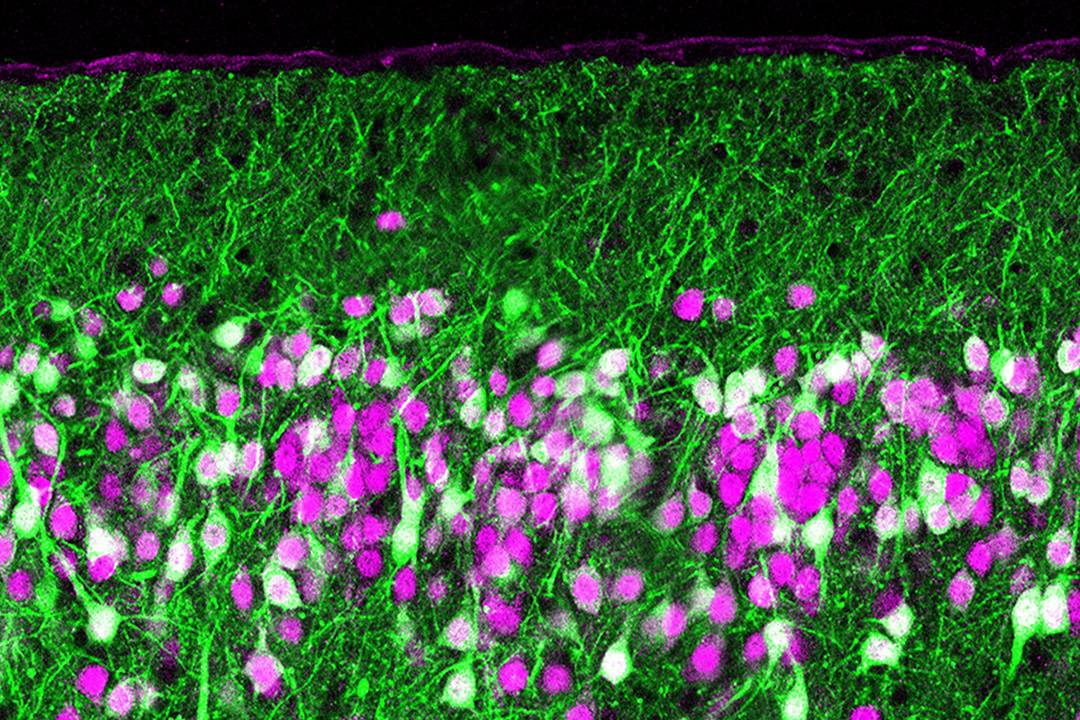 A section of a mouse’s olfactory cortex, where scent signals from the olfactory bulb are processed to help the brain identify odors. Disrupting this processing with a toxin (green) reveals how this processing works. (Kevin Franks lab)

If you can tell the difference between a merlot and a cabernet franc just by smell, it’s probably all in the timing.

That’s because the odor-decoding centers of the brain will pay more attention to the first smell signals to reach them, regardless of how long or strong the remainder of the sniff may be, according to a pair of Duke University neurobiologists who have teased apart the neural circuitry of smell in mice.

Humans have about 400 different types of odor receptors in their nose, each tuned to slightly different scent molecules. Whenever we inhale, the receptors most closely matched to a particular scent will signal first.

But if you take a deeper sniff in that wineglass, you will inhale many more scent molecules, which can activate less specific receptors. Those added signals should dramatically change the scent, but they don’t, a riddle sensory neuroscientists call “concentration-invariance.”

The answer to the riddle, according to new research appearing Sept. 14 in Science, is in the timing.

A scent is routed from the nose through a structure called the olfactory bulb to the olfactory cortex, where its  signals are processed. The first signals to reach the cortex are invariably those that are most closely matched to particular odor receptors in the nose. Therefore, they provide the most precise information about the odor, said Kevin Franks, an assistant professor of neurobiology in the Duke School of Medicine.

“You’ll always activate the most specific receptors earliest,” said Franks, who is also a member of the Duke Institute for Brain Sciences.

This in turn means the olfactory cortex has to have some way to pay attention to the early inputs and ignore those that arrive slightly later. “A more prolonged sniff has the potential to degrade the specific representation of the scent as the concentration rises,” Franks said. “The olfactory system needs a way to filter out the extraneous signals that arrive slightly later.”

If you think about an odor as say, fine tendrils of Chanel No.5 wafting across a room, how does the brain know that faint smell is what you think it is, even as you cross the room and the odor becomes stronger, asks Sandeep Robert Datta, an associate professor of neurobiology at Harvard, who was not involved in this research. “We haven’t known how the brain solves this problem.”

It was known that the first, most specific smell receptors in the nose would signal first, and that the olfactory bulb would in turn pass those signals along to the olfactory cortex, Datta said. “But we didn’t really have a handle on how the cortex enables odor perception. Kevin has isolated this temporal element in a very clever way. This is really impressive.”

The findings come from a study of mice because the researchers know every part of the relatively simple circuit. But Franks said he is confident the same will prove true for humans.

To understand how the cortex could ignore or at least de-emphasize subsequent signals even as the nose and the olfactory bulb continue to send it new information, their study focused on two kinds of inhibitory neurons — cells that can tamp down signals in the cortex. Their first suspect was a “feedforward” neuron which would dampen the signal as it moves from the olfactory bulb to the cortex. But that was not the answer.

Using a sophisticated combination of molecular biology and electrical recordings in the olfactory cortex, the answer turned out to be a second type of inhibitory neuron, the “feedback” neuron, which sends signals back and forth within the cortex. That’s where the inhibition of subsequent odor signals occurred. Though new signals of scent continue to arrive at the cortex, they are suppressed for the remainder of the sniff.

“The system is a little bit like a mousetrap,” Franks said. “The cortex holds onto the first signals that arrive, but afterwards, whatever else comes in afterwards has no effect.”

Franks’ ultimate goal is to understand the powerful bond between smell and memory that novelists and storytellers have long drawn upon. Mice make this somewhat easier, he said, because scent is even more important to a mouse than it is to a human. But the rodent also has a relatively simple circuit from nose to cortex, making it easier for scientists to watch all its parts at work.

“These are the first steps to being able to understand the link between memory and perception,” Franks said.

The research was supported by grants from The National Institute on Deafness and Other Communication Disorders (NIDCD: DC009839 and DC015525) and the Edward Mallinckrodt Jr. Foundation.

Bacon-scented wrapping paper is a thing: Here’s how to get it | pennlive.com