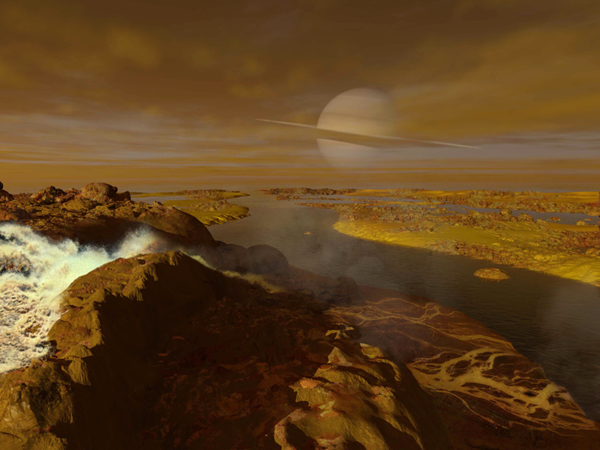 By msensory team04/09/2020No Comments
Titan, Saturn’s largest moon, is a dynamic world with a dense atmosphere, hydrocarbon lakes, and lots of different smells. Ron Miller
Titan is Saturn’s biggest moon. It is so big, in fact, that it rivals Jupiter’s moon Ganymede for the title of the solar system’s largest satellite. If you were to strip Titan bare by removing its atmosphere, Ganymede is slightly larger. But that’s OK; Titan is still so fascinating that we can let Ganymede have that win.

Yes, Titan has an atmosphere. And not a small, inconsequential one, either: Titan’s atmosphere is four times denser than Earth’s. And while you wouldn’t need a spacesuit to protect you against its pressure, you would need one heck of a parka. The surface temperature on Titan is a frigid –290 degrees Fahrenheit (–179 degrees Celsius). For reference, the coldest temperature ever recorded on Earth was when the mercury dropped to only about –129 F (–89 C) at Vostok Station in Antarctica in 1983.

So, an astronaut walking on the surface of Titan would have to keep their skin covered to avoid rapid frostbite, but they wouldn’t need a super bulky spacesuit like they would on the Moon or in the vacuum of space. The astronaut would have to bring their own oxygen, though, as Titan’s atmosphere is devoid of it. Instead, Titan’s skies, like Earth’s, are mostly nitrogen, plus about 5 percent methane and ​a few other trace gases.

For a trip to Titan, one could envision donning attire similar to that worn by researchers working in Antarctica during the frigid winters: clothing with multiple insulating layers, perhaps embedded with futuristic NASA-quality heating elements; thick gloves; hats and balaclavas; and extreme cold vapor barrier boots (fondly referred to by Antarctic researchers as bunny boots or Mickey Mouse boots). The only necessary modification would be an insulated gas mask for oxygen, and maybe a heater to prevent supercooled air from freezing your lungs. The suit wouldn’t even need to be completely airtight as long as oxygen remained circulating. It would be like the masks on airplanes: “Even though your bag may not inflate, oxygen is still flowing.”

This leads to an interesting thought experiment: If an airtight spacesuit is not a necessity on Titan, then it might be possible to get a whiff of your surroundings through your oxygen mask. In that case, what would Titan smell like? 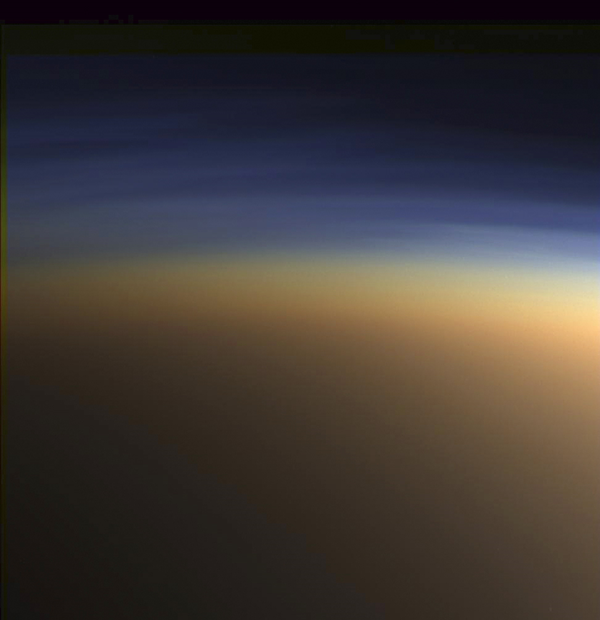 Titan, though dwarfed by the giant planet Saturn (top), is one of the largest moons in the solar system. At about 1,600 miles (2,600 km) wide, the moon is about half the diameter of Earth’s Moon. But unlike our satellite, Titan sports a very dense and hazy atmosphere (bottom). NASA/JPL-Caltech/Space Science Institute

An inventory of Titan’s smells

Thanks to the instruments aboard NASA’s Cassini spacecraft, as well as those on the Huygens probe built by the European Space Agency (ESA), we have a fairly good understanding of the composition of Titan’s atmosphere. Therefore, we can hazard an educated guess as to what the world may smell like.

The two main ingredients of Titan’s atmosphere — nitrogen and methane (CH4) — are both odorless. The distinctive smell you might associate with methane is actually another gas (methanethiol), which is added to consumer methane for safety. Methanethiol is often described as smelling like rotten eggs, and the human nose can detect it down to the parts-per-billion level. By adding this putrid-smelling chemical to methane and natural gas, we humans can quickly detect and address potentially dangerous leaks. 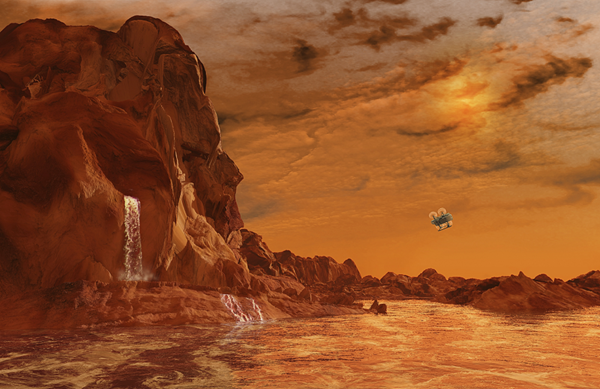 Currently planned for launch in April 2026, Dragonfly is a cutting-edge NASA mission that will send a flying rotorcraft to Titan. Thanks to the moon’s thick atmosphere and weak gravity, Dragonfly will be able to efficiently explore the alien world. Ron Miller

Many of these have no odor, although some may seem to. Molecular hydrogen, carbon monoxide, and ethane have no smell at all. But acetylene is a trickster — it is odorless just like methane, but anyone who has used an acetylene torch might dispute this. That’s because impurities in welding-grade acetylene typically include phosphine, which can give it a garliclike smell. But acetylene itself is not the culprit.
Don’t fret, though — a few of Titan’s trace components do smell. Ethylene is the simplest alkene (two carbon atoms connected with a double bond) and is a common plant hormone that influences fruit ripening and seed germination. In its pure form, it is reported to have a sweet and musky scent. Similarly, acetonitrile, which is used in many chemical and organic synthesis reactions, has a sweet, etherlike odor. Rounding out the sweet smells is propyne, also known as methylacetylene, which is used both for welding and as rocket fuel. 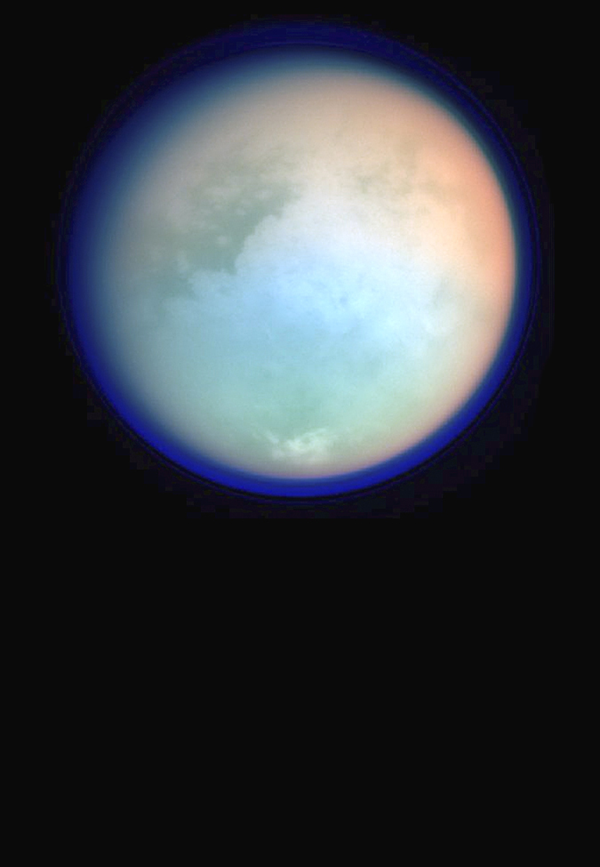 Then there’s hydrogen cyanide, which is described as having a bitter almond odor. As you may know from spy flicks, this gas is also incredibly poisonous. But the threshold for smelling hydrogen cyanide is less than 5 parts per million, while a lethal dose is around 135 ppm. Although you wouldn’t want to take a big whiff, you can smell it and survive the experience. But please do not try. Roughly 25 percent of people cannot smell the gas, due to a recessive genetic trait. So, you could easily breeze past smelling and into the afterlife.

There may be less-appetizing scents on Titan as well. Ammonia has a very strong, characteristically pungent odor. It is commonly used in fertilizers and as the primary component of smelling salts, and evokes the scent of particularly concentrated urine. 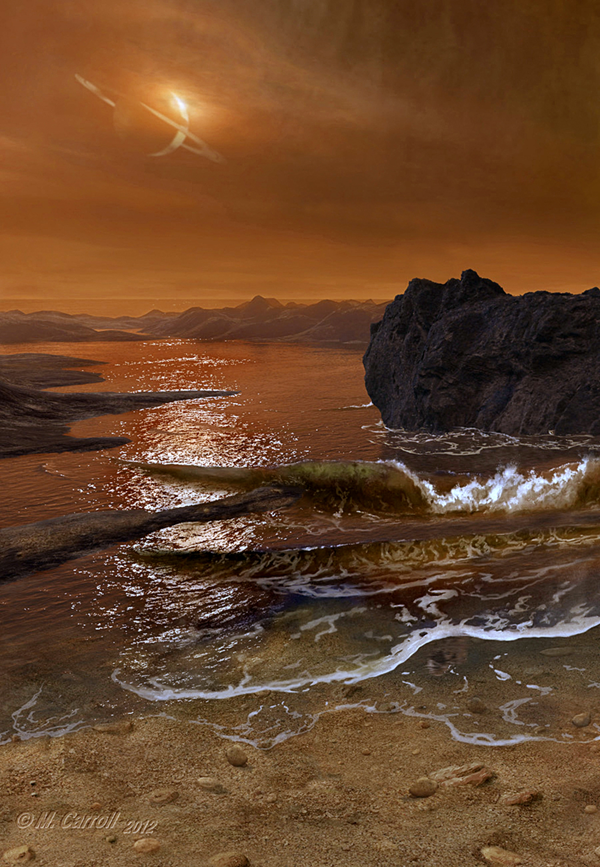 Titan’s hydrocarbon seas slosh against the alien shoreline in this artist’s illustration. Such mixing could help instigate the formation of increasingly complex molecules on the moon. Michael Carroll

Rounding out the list of pungent smells, we have methylamine — the precursor Walter White used to brew methamphetamine in the TV series Breaking Bad. Although the smell was not a focus in the show, it should have been, as it carries undertones of putrid fish. This chemical is a byproduct of decomposing animal tissue and is used by some organisms to generate energy via methanogenesis.

Benzene, a compound found in crude oil and known to cause cancer, is also present in Titan’s atmosphere. Despite being carcinogenic, benzene has a sweet, aromatic, gasoline-like odor that’s sometimes compared to the smell of solvents.

A whiff of Titan

At this point, for Titan’s potential smells, we have: sweet, musky, bitter, pungent, and rotten, with a few other subtle notes thrown in. But remember, Titan’s surface is very cold. This means that only small molecules with weak intermolecular interactions will have a low enough boiling point to remain volatile (allowing them to easily turn into vapor). Only those will be able to float up through a gas mask and into an astronaut’s nose.

All of the odorous compounds we’ve listed so far are frozen solid on Titan’s surface — meaning they won’t be very volatile — with the exception of one: ethylene. This hydrocarbon has a freezing point of –272 F (–169 C), which is just warmer than Titan’s surface temperature. And in some lab experiments, scientists have seen it remain liquid down to –298 F (–183 C). The general thinking is that this is due to freezing point depression, where salts that have dissolved in the liquid lower the mixture’s freezing point. (This is why snowplows salt the roads in wintertime to prevent icing.) So, ethylene is the most likely molecule to be volatile on Titan, which would give the world a sweet and musky aroma. 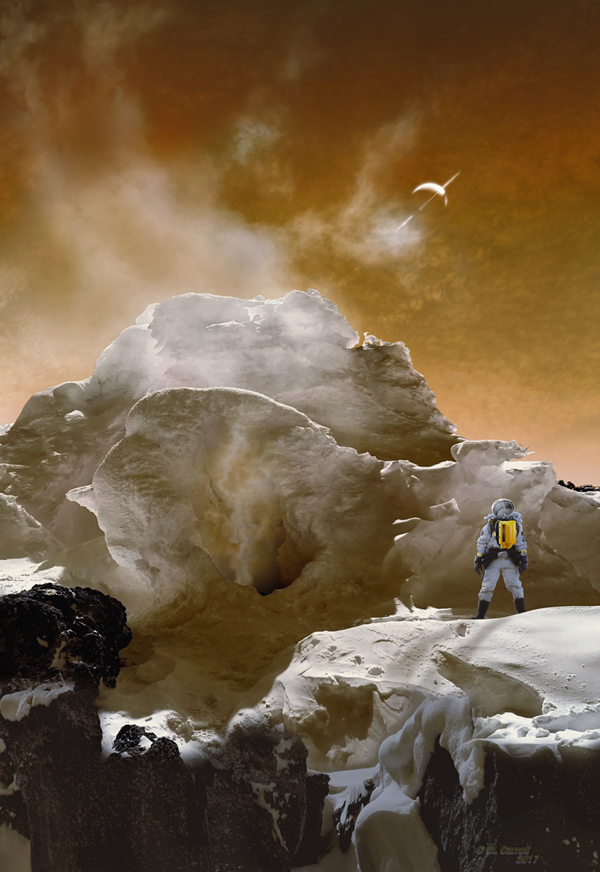 When the Huygens probe touched down on Titan, it provided an unprecedented look at a visually stunning and surprisingly complex moon. But if humans ever reach the alien world, as seen in this artist’s concept, the first thing they would notice probably wouldn’t be the sights, but the smells. Michael Carroll

But that’s not the end of the story of Titan’s smells. We also need to factor in the sensitivity of the human nose. Human odor thresholds are a real thing, and you can find them for all sorts of compounds. So even if a substance is frozen solid, at least a few molecules will escape into the vapor phase. And if the nose is sensitive enough to detect them, the brain will register it as a smell.

In terms of odor thresholds, three molecules stand out: hydrogen cyanide and benzene have about the same odor threshold of up to about 5 ppm. Meanwhile, humans can detect methylamine down to a scant 0.0021 ppm. By contrast, to smell ethylene would require a concentration of around a whopping 270 ppm. This brings our gasoline, almond, and dead fish fragrances back into the mix.

And finally, we must also consider that a human’s ability to perceive an odor — called olfactory acuity — is dependent on factors such as age, smoking habits, gender, and nasal allergies. Plus, there are genetic factors that come into play, like the previously mentioned inability of some to smell hydrogen cyanide. Ultimately, the Eau de Titan will be affected by the individual astronaut’s olfactory setup.

So, what does Titan smell like? For the average astronaut, my best guess would be: sweet and musky (ethylene), with fishy overtones (methylamine), and a hint of bitter almonds (hydrogen cyanide) accented by gasoline (benzene).

But will we ever know for sure? That’s the plan.

NASA’s recently selected Dragonfly mission aims to send a small rotorcraft to touch down on Titan in 2034. The craft will then fly above the surface to explore a larger swath of the saturnian moon. During its mission, Dragonfly will utilize its state-of-the-art suite of instruments to directly detect molecules present both in moon’s atmosphere and on its surface.

And, I’d imagine, as Dragonfly uses its eight sets of helicopter blades to take off, it might just kick up a cloud of Titan dust with a very interesting — if not slightly deadly — olfactory bouquet.

How VR, AR could support astronauts’ mental health in space

‘Aroma sculptor’ sets out to build scent of the moon

Behind the scent: Lockheed Martin bottles astronaut’s smell of space

A VR View From Space Could Change the World