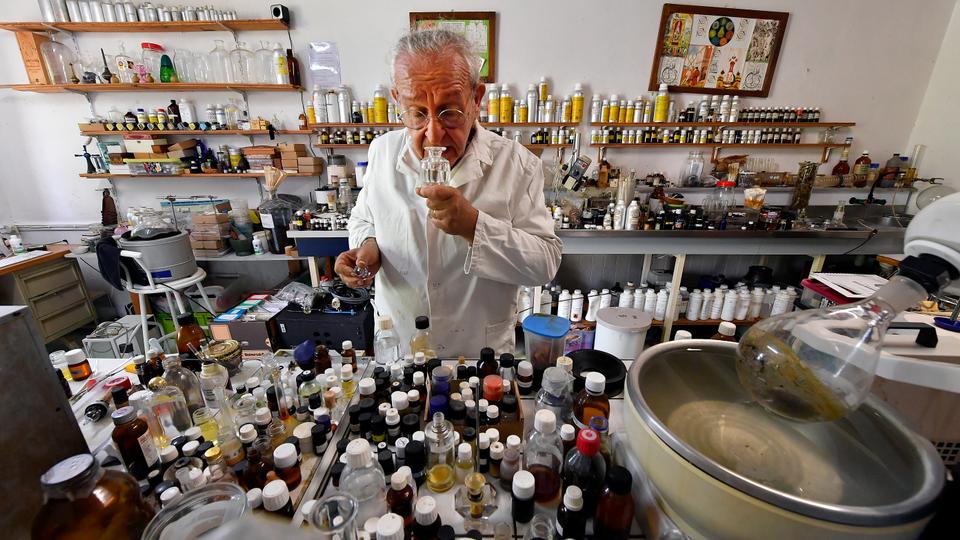 In this photograph taken on July 29, 2020, Michael Moisseeff sniffs a bottle in his home at Montegut-Lauragais near Toulouse, southwestern France. (AFP)

Michael Moisseeff straddles the line between artist and scientist as he dissects the mysteries of smell and producing all kinds of scents, fragrances and emanations from molecules.

He may never have pulled on a spacesuit or flown in a shuttle but that has not stopped Frenchman Michael Moisseeff from reaching for the stars.

After years of exploring and reconstructing the scents of planet Earth, the 66-year-old “aroma sculptor” has set himself a new goal, capturing the smell of the moon.

Moisseeff, with his floral shirt and a head of white hair tied up at the back, straddles the line between artist and scientist as he moves purposefully around the thousands of vials that make up his laboratory.

It is here that the trained geneticist fulfils his life’s work of dissecting the mysteries of smell and producing all kinds of scents, fragrances and emanations from molecules.

“To recreate the scent of undergrowth, for example, you have to go there first,” he says.

“Is there any moss? Lichen? Moisture? I take an inventory and bring my elements together like a painter with his palette of colours. Then I work on the measures of each to try as best I can to finesse the scent.”

Unfortunately the moon is not quite as accessible as the undergrowth and the Cite de l’Espace (Space City) in Toulouse “did not want to pay for the trip”, jokes Moisseeff.

The only way he could build a picture of the scent in his nose, the key tool for his work, was to read up on descriptions made by various astronauts who walked on the moon, in particular Neil Armstrong, the first man ever to do so in 1969.

“Due to the lack of oxygen on the moon, he (Armstrong) obviously couldn’t smell anything but once back in the module, the smell of dust clinging to his spacesuit reminded him of the burnt black powder of an old six-shooter,” he says.

Notes of carbon and sulphur

In order to reproduce that smell, Moisseeff chose to detonate black powder in his own saucepans. After several failed attempts,  and a couple of scares, he finally succeeded in “capturing” a burnt deposit.

Then, once he had worked out what kind of smell he was looking for, this modern day alchemist set to work finding the right notes to complete the scent.

A blend of metallic, carbon and sulphur notes combined to titillate the nostrils and the imagination.

“This enigmatic smell reproduced from the descriptions of various astronauts evokes scents that we know like gunpowder and chimney ash, but that doesn’t mean that we wouldn’t find it on the moon”, says Xavier Penot, scientific mediator at the Cite de l’Espace in Toulouse and the man behind the idea.

Humans have around 260 odour sensors situated in the olfactory mucosa, the organ of smell located in the upper region of the nasal cavity.

“An odour occurs when a molecule encounters a sensor in your olfactory mucosa, generating a signal that will cause a sensation in you,” says Moisseeff.

“And this feeling is absolutely individual, depending on the genetics and the experience of each person.”

Moisseeff has often been described as an “aroma sculptor” and he certainly does not shy from linking his work to other creative arts, with his nose his most important instrument.

“Smells are like in music, you have to do your scales all the time,” he says.

This “scientific artist” even displays his work in a variety of ways that would not be unfamiliar to contemporary artists, he has long been staging installations and fragrant experiences in telephone booths, entire villages or performance halls at the request of museums, associations or companies.

He even runs “odour tasting” training and workshops for anyone wanting to put their noses to better use.

Moisseeff’s next challenge takes him back to the Renaissance as he attempts to reconstruct the scent of the Mona Lisa, or at least her surroundings.

It will be “a meticulous work of investigation and historical research”, he says with some excitement.

If he succeeds perhaps Moisseeff will finally uncover the secret behind that most famous of enigmatic smiles.

Source: ‘Aroma sculptor’ sets out to build scent of the moon

“Hit a tripwire of smell and memories explode all at once. A complex vision leaps out of the undergrowth.”