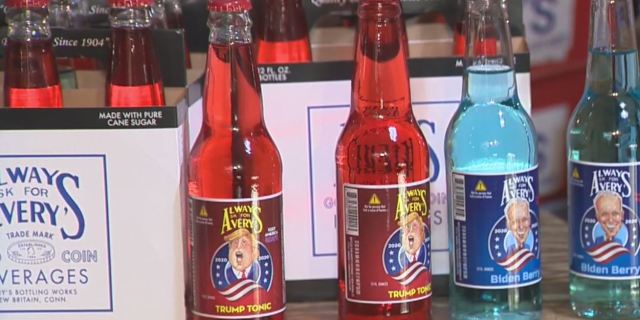 Local businesses are getting in on the action in advance of Election Day — including a New Britain-based soda company.

Election Day is busy at Avery’s Beverages, with voters coming straight from the polls to get a pop for their favorite candidate.

They’ve has rolled out two new flavors for Election Day that has received national attention. You can choose from Democratic ‘Biden Berry’ or the Republican ‘Trump Tonic.’

General Manager of Avery’s Beverages, Rob Metz, said, “Our Trump Tonic is a keep America great, so it’s a red grape soda, and our Biden berry is it mixed berry soda with no malarkey added.”

This is the fourth election the company has been making political-driven soda flavors. Some of their past flavors include “Shutdown Swill,” “Barack O-Berry,” “Hillary Hooch,” and “Make America Grape Again.”

“So far, we’ve predicted every election even 2016, correctly predicted based on our customers’ preference, so we’ll see what happens this year,” Metz said.

Avery’s unique sodas date back to 1904 and are currently known for the variety in flavors like Cream, Birch Beer, and Ginger Ale. The establishment sells small-batch craft sodas in over 35 flavors made with cane sugar.

You can find more information on their website here.