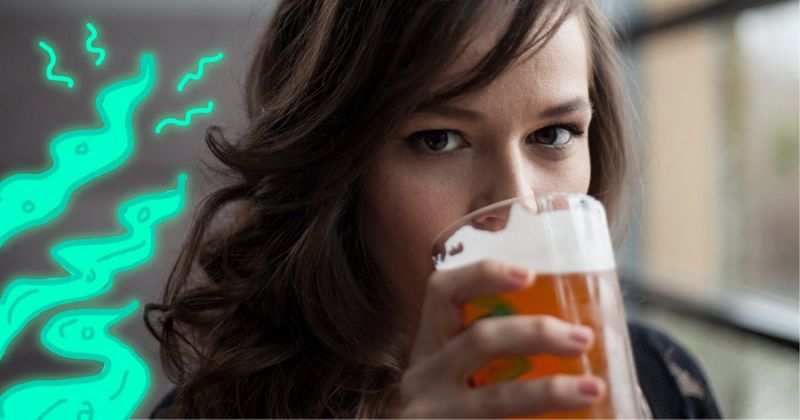 Your manly musk may cause your wife to consume more alcohol, according to new research from the American Psychological Association. The findings suggest that male sexual scents may drive women to drink, perhaps because we associate sex, smell, and alcohol with one another.

“Because sex-based scents are a biological component of sexual behavior, and alcohol is associated with sex via, at the very least, experiential and cognitive processes,” according to the study. “It is not a stretch to posit that the activation of sexual processing pathways in the brain by exposure to particular scents might, in turn, activate alcohol associations.”

It’s definitely not a stretch to consider that women may be driven to drink more beer when exposed to male scents—because men have been found to do the same when exposed to female smells. When male participants were instructed to smell the t-shirts of women during the fertile part of their cycle (under the guise of a detergent preference survey), they consumed more beer than men exposed to the shirts of women who were not fertile. Men reported being completely unaware of the scent affecting their drinking, which echoes past research that men respond to fertility signals without realizing it.

For this study, researchers asked 103 women to smell “cologne” which was actually either androstenone, a  male sex pheromone found in boars and the first mammalian pheromone to be identified, or plain water. Then women were then offered beer. Those who had sniffed the androstenone drank significantly more than their peers. “Consistent with the earlier work, females consumed more alcohol after exposure to a male sexual scent (androstenone) than after a neutral scent,” the researchers concluded. “Detection of male sexual scents…may instigate drinking because of the longstanding cultural association between alcohol use and sex.”

There are several limitations to the research. First, the sample was limited to younger undergraduate students and not enough of them were ovulating at the time of the study to test if women’s fertility influenced their responses as well. Whether or not humans respond to sex pheromones is also something that’s a matter of scientific debate. There is ample evidence that there are no human sex pheromones, and that we’re more or less immune to non-human ones.

Nonetheless, the research increases our understanding of how humans may associate alcohol with sex. “That a ‘hidden’ pathway may operate in both males and females to influence alcohol use in humans is notable,” the authors conclude. “The implications are extensive; mating behavior is central to evolutionary theory because species survival is at stake.”

Source: Your Manly Scent Is Making Your Wife to Drink All the Beer