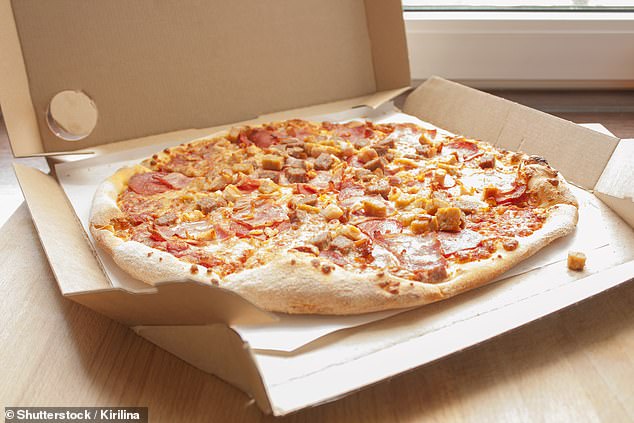 Can’t resist fatty food? Surround yourself in its scent for 2 minutes | Daily Mail

-Dozens of US teenagers were exposed to the scent of strawberries, apples, biscuits and pizza to see how it impacted their cravings

Being surrounded by the scent of a burger or pizza for two minutes is enough to banish your cravings for junk food, new research claims.

Smelling the aroma for less than 30 seconds will tantalize you and drive you to give in to temptation.

But 90 seconds more will satisfy your senses, according to a new study on humans who were exposed to the scent of strawberries, apples, biscuits and pizza to see how it impacted their cravings.

Experts say the findings suggest air freshener manufacturers could develop food scented ones to curb people urges to indulge in fatty and sugary foods in a bid to beat the obesity epidemic.

Appetizing aromas that waft from takeaway restaurants and fish and chip shops have the power to satisfy the belly – if it lasts long enough.

That is because the brain doesn’t necessarily differentiate the source of sensory pleasure, say scientists.

It could be the key to combating the worldwide obesity epidemic because banning or taxing fatty and sugary treats are unlikely to work.

The University of Florida marketing expert said: ‘In fact, subtle sensory stimuli like scents can be more effective in influencing children’s and adults’ food choices than restrictive policies.’

The findings published in the Journal of Marketing Research may lead to food scented air fresheners and room sprays encouraging people to eat more healthily.

In the study Dr Biswas and colleagues exposed participants to the scent of either a healthy strawberries or apples or biscuits or pizza.

Those who sniffed the unhealthy options for less than 30 seconds were more likely to want them.

But if it lasted more than two minutes they stopped finding them desirable, and instead craved the fruit.

The experiments involved dozens of US teenagers in a middle school cafeteria and a supermarket, with the results backed up in the lab.

Previous research has shown just a whiff of fried food from a burger or pizza bar is enough to make us buy one.

But Dr Biswas said putting yourself through 120 seconds of the torment may actually help you to say no – and shift the pounds.

He said one manufacturer is the US is already making cupcake-scented and cookie-scented air fresheners.

‘If the findings of our research hold in non store, non cafeteria and non lab settings, such as in homes, then using cookie-scented air fresheners or scented candles could possibly nudge healthier choices at home.

‘Clearly, additional research in home settings is needed to explore this in greater depth.’

He said marketers are increasingly using ambient scent as a strategic tool to differentiate from the competition, attract customers, stimulate sales, influence mood and create an overall pleasant and memorable shopping experience.

They are often infused in retail stores, supermarkets, hotels, restaurants and cafeterias, airplanes and stadiums.

Dr Biswas said: ‘While managers have traditionally focused on ambient sensory factors related to visual and auditory cues, there is a growing trend toward focusing on olfactory cues as a strategic element in retail atmospherics.

‘For example, Samsung pumps the scent of honeydew melons into its flagship store in New York.

‘In a recent trend, restaurants are adding artificial ambient scents of foods that may not even be on their menus.

‘For instance, Chicago-based Alinea restaurant uses burning cinnamon sticks and branches of fresh rosemary as an ambient scent; Cleveland-based Vita Urbana uses the smell of burned bay leaves and heated cilantro as an ambient scent, even though the chef does not put cilantro into the dishes.’

Source: Can’t resist fatty food? Surround yourself in its scent for 2 minutes