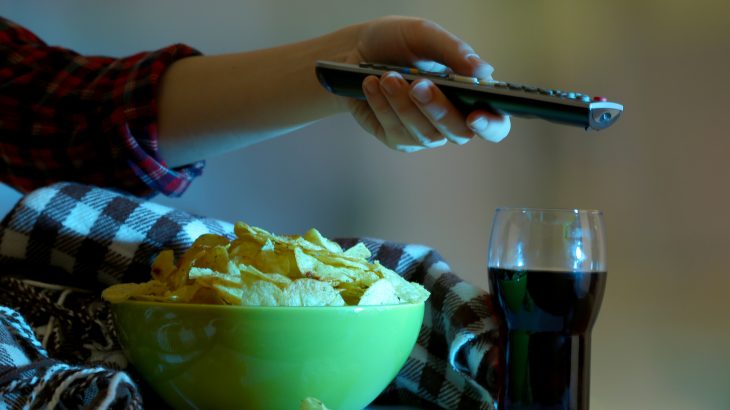 Why eating gets out of hand in front of the TV | Earth.com

Sensory overload can cause us to overeat when our attention is focused on other things, such as the television, according to a study from the University of Sussex. The researchers found that eating while doing something that is perceptually-demanding makes it more difficult to notice when you feel full.

The experts explained that when your senses are engaged elsewhere, you are less likely to be able to adjust how much extra food or drink you consume. They referred to this behavior as “inattentive eating.”

“Our study suggests that if you’re eating or drinking while your attention is distracted by a highly engaging task, you’re less likely to be able to tell how full you feel,” said study co-author Professor Martin Yeomans.”You’re more likely to keep snacking than if you’d been eating while doing something less engaging.”

“This is important for anyone wanting to stay a healthy weight: if you’re a habitual TV-watching snacker – watching, say, an engaging thriller or mystery, or a film with a lot of audio or visual effects – you’re not likely to notice when you feel full. Video-gamers and crossword solvers should also take note!”

The study involved 120 participants, who were assigned tasks that required either a high or a low level of attention. They were also given drinks with either high or low calories. Next, while still engaged their tasks, the participants were given a snack to eat.

The researchers discovered that participants who were busy with a perceptually-demanding task ate roughly the same amount of crisps regardless of whether or not they were initially given a high or low calorie drink.

By contrast, the individuals who were engaged in a task that was less demanding adjusted the amount of snacks they consumed. In this group, participants ate nearly half as many crisps after the high energy drink compared to the low energy drink.

Previous studies have shown that when perceptual demand is high, and the senses are fully engaged, the brain filters out some sensory information. The current study is the first to demonstrate that nutrient cues associated with becoming full can be filtered out in this manner.

“We already knew that feeling full could be affected by the texture and appearance of food, as well as pre-existing expectations about how full we think a type of food should make us feel,” said Professor Yeomans. “Now we also know that feeling full depends on how much sensory information our brains are processing at the time.”

The findings provide the very first evidence that Load Theory of attention, or the idea that a person can only handle a limited amount of sensory information at any given time, can be applied to eating habits.

The study is published in the journal Appetite

Source: Why eating gets out of hand in front of the TV • Earth.com