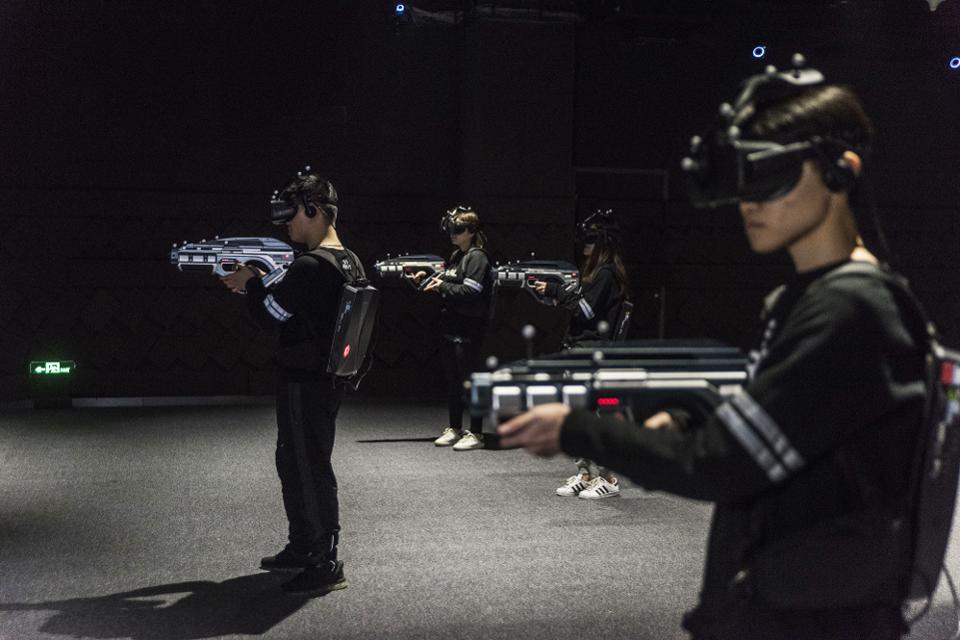 Much is written about the great power and promise of immersive technologies like virtual reality (VR). VR ultimately takes us places, and enables us to experience, in a way that previously was unfathomable. Much less is written about the known and, even more importantly, unknown risks associated with VR’s full sensory immersion. Key to both is the fact that VR is not really a visual medium at all. It is an experiential one. We aren’t so much watching or listening to content. We are immersed directly in it. If done right, VR holds the power to generate deep physiological and biological impacts. Your mind and body believe you are experiencing a particular very real moment right here, right now. You are simply “present.”

I. THE POWER & PROMISE OF IMMERSION

Many tantalizing positives flow from VR’s fundamental concept of presence. Enhanced entertainment is one of them. Fans of Star Wars can now actually be a Jedi Knight inside a movie (well, kind of). The Void’s Star Wars: Secrets of the Empire “free roam” VR experience enables consumers to walk around untethered in an out-of-home physical environment. VR also holds the power to generate deeply impactful – and very real – empathy and social impact. Case in point Carne y Arena (flesh and sand), an immersive experience created by Academy Award winning director Alejandro Inarritu (Birdman). Carne y Arena utilizes VR to place us in the middle of the Sonoran Desert with immigrants who reach the U.S. border only to be stopped by the border patrol. Immersed in this reality, otherwise anonymous stories transform into real understanding of harrowing lives and emotional pain that drive that migration. These daunting journeys become more personal, more tangible and, therefore, more real. VR becomes a machine for real empathy. Perspectives change.

Let’s take VR’s teleportation power a different direction. Global travel. Think of that power for the elderly, the physically challenged, the underprivileged – those for whom the luxury of travel is simply out of reach. Now all can see the world. Scratch that, be in that world. Imagine your child’s next field trip. Google’s little-known Google Arts & Culture site enables anyone to immerse themselves in over 1,200 of the world’s greatest museums, all from the comfort of their own homes. For free. Now, those arts and educational opportunities are available to entire societies, not just the privileged few. The Travel Channel indeed!

Let’s go even further. Imagine experiences for the treatment of health and psychological issues. Firsthand Technology helps cancer patients reduce post-surgery pain by immersing them in a VR world of cool or light, refocusing their bodies and minds. That VR-induced trickery reportedly leads to pain reductions comparable to that of opiates. In one case study, patients experienced a 30% reduction in pain and utilized 20% fewer opiates. Psious is another interesting VR company changing lives for the better. Its immersive technology
develops exposure therapies that help people cope with debilitating fears of all kind – fear of flying, fear of heights, claustrophobia, you name it. The company has found that if its patients (for lack of a better word) can experience their particular fears in a controlled environment, they can learn to overcome them. These examples demonstrate VR’s revolutionary power and potential to enhance quality of life.

But, as with any new technology that holds great promise, serious known – and unknown – risks exist. In the realm of entertainment, VR holds the power to take already intense experiences several extreme steps further. In some cases, now you aren’t just watching the gore, knowing all the way that you outside it. Now your mind and body actually can feel the bloodbath. That you are inside it. Imagine renown gamer experience Call of Duty, VR style. You aren’t just playing war amidst all of its death and destruction. Your body now feels as if it is at war. The prospect of very real trauma becomes very real indeed. Google’s Daydream VR website expressly warns of potential Post Traumatic Stress Disorder (PTSD). That’s why many in the industry now push for new content standards for this brave new immersive world. Oculus, for one, offers guidelines for developers.

Given these very real risks, does that mean some kind of moral obligation exists in terms of how to develop, distribute and experience these immersive possibilities? After all, we simply don’t yet even come close to understanding the full implications here. We just know that serious questions exist.

“These fields may also induce more elaborate forms of sensory hallucination ranging from the feeling of a ‘sensed presence’ to seeing a fully formed apparition.”