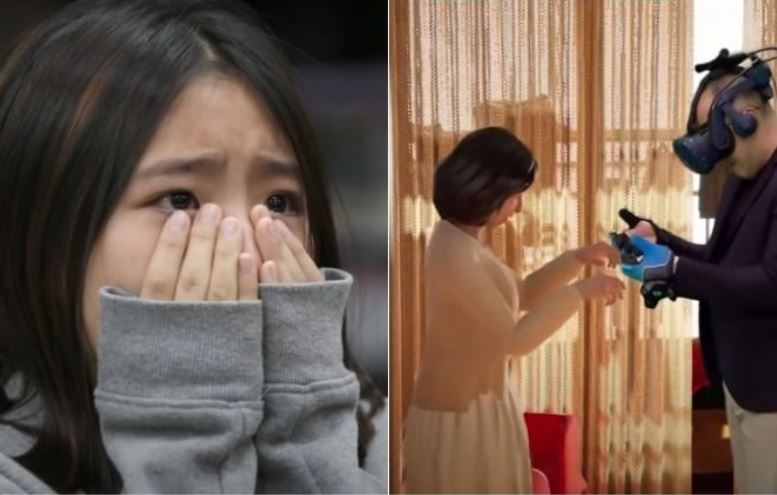 A man from South Korea was caught on camera breaking down in tears after reuniting with their deceased wife through virtual reality.

Watch the video below:

Technology is changing the world and it is helping people cope up with the problems that they are facing.

VR, which is also known as virtual reality, helps us humans experience something that we have never experienced before. By wearing a headset, you can experience things that you would never want to, such as walking on a wooden piece that is hanging on the top of a building or even ride the scariest roller coaster in the world.

Not only stuff like that, but this piece of technology is helping people live memories that matter most to them.

The best example of this was the moment a South Korean man got to experience the presence of his deceased wife using virtual reality.

The virtual reunion that we are talking about was part of a TV documentary that allows grieving family members to see their loved ones who had passed away by using the very high-level technology.

Kim Jung-Soo, a man from South Korea, was the one in the video that we showed above.

The wife of Kim passed away from a serious illness some time ago.

It took professionals over 6 months to prepare the mother in the Virtual Reality.

The producers said they had to recreate moments of the late wife’s voice and other movements to make the experience realistic.

Jong-yun, the daughter of Kim, was there when her father and their mother got to reunite.

She also talked about their relationship.

He would kiss her from time to time when working, when eating, or when watching TV. Even when my mother was sick and lost her hair, my father would say that she was pretty and carried her around.

The man was reportedly slow dancing with his wife in Virtual Reality.

The video was shared on YouTube, where it currently has over 1 million views.

Here are some comments that were left on the video on YouTube.

A user said: “The actors who have to immerse themselves, knowing the weight of what they must convey to the person still enduring a great loss- it’s a beautiful project for people who desperately need to finalize their goodbye.”

Another user said: “it’s so heartbreaking, it must be really hard for the husband to do this, but i’m happy for him cuz for once they can finalize their last moment.”

What are your thoughts on virtual reality helping grieving people meet their loved ones despite their death? Let us know what you think about the reunion by leaving a comment in the comments section below!