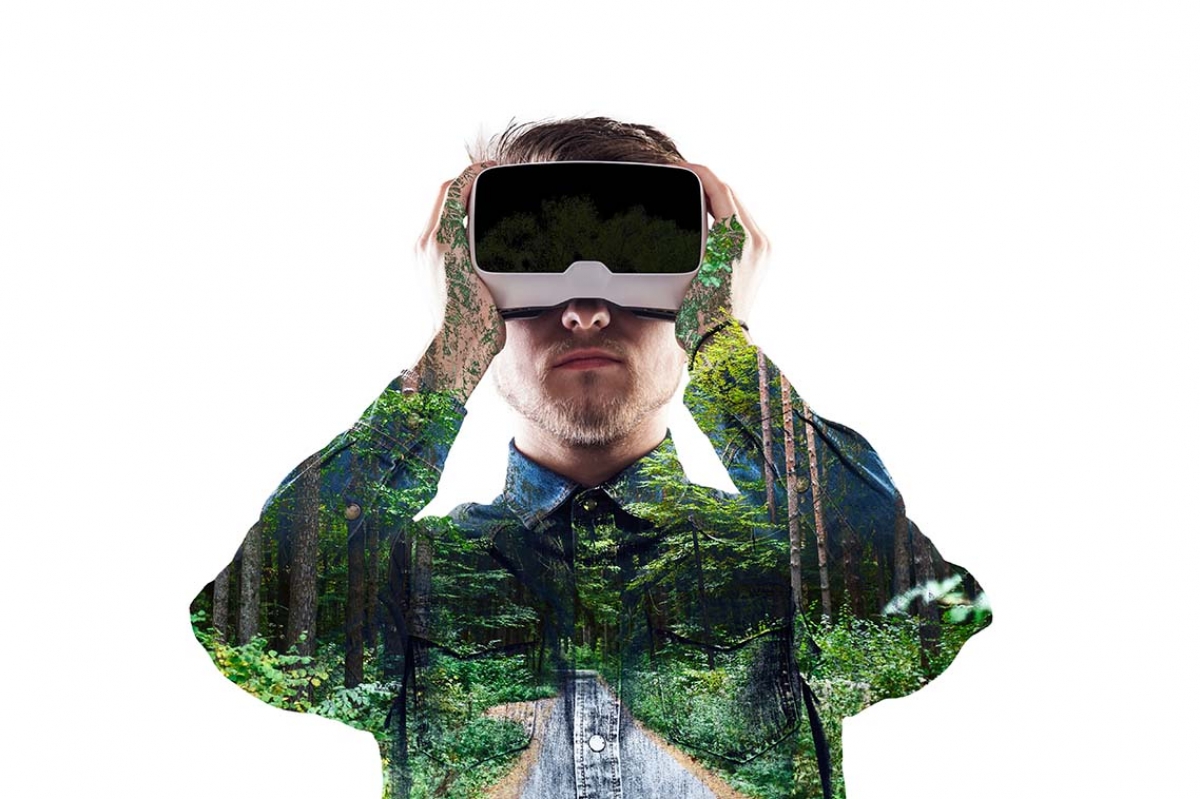 Virtual reality can bring the outdoors in, but is it a patch on the real thing? | Geographical Magazine

By msensory team11/05/2020No Comments
Virtualising nature – an affront to the glory of the natural world, or a much-needed tool for those unable to experience the great outdoors?

Against a backdrop of increasing urbanisation, the health benefits of daily contact with nature are being expounded by scientists . Yet, 55 per cent of the world’s population is currently living in urban environments, and the number is expected to increase to 68 per cent by 2050. In the UK alone, less than 40 per cent of people visit natural environments during a regular week, according to a 2016 survey.

In its 2016 report, the World Health Organization concluded that urban green spaces improve relaxation, social capital, immune functioning, and fitness, as well as reducing anthropogenic noise through the production of natural sounds. Through rigorous surveys, Martin White and colleagues at the University of Exeter have also reported a strong connection between the levels of contact with nature in the previous seven days and self-reported health and well-being in a sample of more than 20,000 participants.

With sharpened focus on the health benefits of nature, many are starting to consider how the natural world might be brought to those most in-need. For many Geographical readers, myself included, the term ‘virtual reality’ or VR, may feel unsettling, especially when used in the same sentence as ‘nature’. Nonetheless, VR technology is developing at an unprecedented speed. With newfound applications in clinical and care settings, VR nature has grown from a ‘hyped, overrated technology’ (as one consultancy described it) to a commercial reality.

Researchers have tested the possibility of providing distraction from acute, painful procedures using VR nature. Dental patients distracted from the pain of prying instruments by coastal views have reported less pain during procedures. Later, the same study revealed that exposing people undergoing a similar dental procedure to a VR coastal walk resulted in reduced anxiety and vividness of pain memory.

As early as 1999, VR nature was being evaluated as a tool for improving the experience of patients undergoing chemotherapy. While it’s not yet clear how this might influence the clinical effectiveness of treatment, research led by Macarena Espinoza at the University of Valencia demonstrated that patients receiving chemotherapy with VR nature reported a reduction in distress and increased happiness during and after treatment. A review of 19 studies of the use of VR in cancer clinical settings found that VR was able to substantially reduce the perceived time elapsed during chemotherapy treatment.

Outside of the clinical setting, companies and initiatives such as Viarama and Blue Health are attempting to bring joy to elderly people in care homes, using HTC VIVE headsets and Google Earth’s VR technology to help them experience the outdoors. Blue Health is a joint initiative between Lund University, University of Exeter and the Estonian University of Life Sciences, exploring how different types of virtual environment might bring some of the benefits of natural environments to those unable to experience them. The team are collecting feedback from elderly users to generate state-of-the-art virtual environments that allow users to interact with ‘natural environments at will’.

As we brace ourselves on our personal islands, it can be hard to picture the processes of the planet continuing to whir. Marooned in our homes, it’s vital that we stay positive, motivated and informed. Geographical is committed to helping you explore the world from the comfort of your sofa. Get the world delivered to your door, with Geographical.

Mattias Wallergård of Blue Health is currently working on a project whereby elderly people in care homes can fly a hot-air balloon over a pristine island landscape. In an interview with Mongabay, Wallergård said: ‘Imagine connecting elderly care centres between nations and being able to have natural and social experiences in the same VR setting.’

However, there are downfalls to the use of VR nature in elderly populations. ‘Cybersickness’ is the most common complication associated with VR devices. Immersion in virtual environments can cause mismatches between visual and vestibular neurological systems (the system which governs the brain’s information on head position and spatial orientation), causing the reported dizziness and nausea. Old age, together with neurodegenerative diseases, have been found to exacerbate the sensations of cybersickness, with the elderly less able to readjust posture and walking direction than younger people.

There are now ongoing efforts to tailor make VR devices suited to older people – the new HTC VIVE VR system reportedly eliminates the risks of sensory mismatch with the addition of a tracking system that allows the real-time 3D image of VR nature settings to be updated according to the user’s orientation and movements.

Despite ongoing improvements to the quality of VR nature systems, it is unlikely that they will ever come close to replicating the holistic, sensory and sometimes elating experience of being outdoors. Indeed, the earliest pioneers of the work, Daniel Levi and Sarah Kocher, offered a stark warning in their 1999 paper: ‘the problem with virtual nature – like the problem with plastic trees – is that the value of nature is more than the experiential and recreational benefits it provides to people. Nature provides a variety of benefits beyond human’s immediate experience; nature exists and has value separate from human beings.’

For many people, technology has clearly brought an estrangement from the natural world and its benefits. It is ludicrous, even dystopian, to think that an antidote will be to offer VR nature experiences to city-dwellers. However, for those unable to experience the great outdoors, such as the infirm, the elderly, or those undergoing acute procedures, technology could form part of the solution.

Source: Virtual reality can bring the outdoors in, but is it a patch on the real thing? – Geographical Magazine