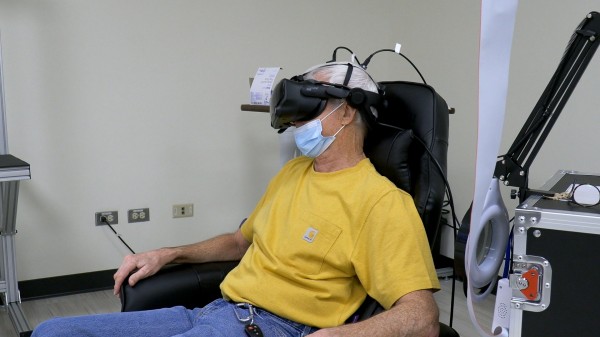 On October 27, 2020, surgeons and researchers at the University of Chicago Medicine conducted a delicate surgical procedure to implant specialized electrodes into the brain of a quadriplegic patient, allowing him to control, manipulate and feel sensation from an arm in a virtual reality environment. The subject is the first person in Chicago and just the fourth subject to participate in an ongoing multisite study dedicated to understanding how the brain receives and sends motor and sensory signals.

Scott Imbrie was 19 when a car accident damaged his spinal cord and left him paralyzed from the neck down. Though his doctors said it was unlikely, over months of rehabilitation, he was able to relearn how to walk. Now, decades later, he’s pushing the envelope of medical possibility yet again — this time as a subject in a unique research trial to test the use of neuroprosthetic devices that allow him to sense and manipulate a virtual hand and, eventually, a robotic prosthetic.

Imbrie’s surgery was the first time the procedure, including both motor and sensory electrodes, had been performed in Chicago. The implanted electrodes receive neuronal signals from his motor cortex, allowing him to control and manipulate an arm in a virtual reality (VR) environment. They also send sensory feedback to his brain, allowing him to experience touch sensations on his hand to “feel” pressure and vibration. Ultimately, the team plans to connect the system to a robotic prosthetic hand for Imbrie to use in the real world. Refining this research and developing new advanced neuroprosthetic devices would provide new freedom for people who are paralyzed or missing a limb.

The study is an expansion of ongoing research conducted at the University of Pittsburgh and the University of Chicago Chicago in other paralyzed patients. Like something out of a sci-fi movie, the goal, researchers say, is to develop technologies that can replace missing limbs or restore touch and movement for those who are paralyzed.

“The brains of people who are paralyzed can still generate the signals that would normally control movement, but the signal can’t make it past the injury,” said project lead John Downey, PhD, a staff scientist at the University of Chicago. “We’re trying to determine how to use that signal from the brain to allow them to control a prosthetic robotic arm and hand. And in addition to being able to control the arm and hand, we want to give them the ability to feel as though their own hand were touching an object when that prosthetic touches an object.”

During his four-hour test sessions, Imbrie performs activities that seem repetitive — with a VR headset slipped over his eyes, he uses his mind to move a floating hand in a simple virtual setting. For this activity, he practices reaching to pick up a cup from a table, moving it to align with a target presented by the system, and setting it back down. Later, Imbrie will concentrate as the researchers feed his brain sensory information as he reports on where he feels the sensation and what it feels like.

“All the sensory signals that come from the hand give you information about the objects that you interact with and your interactions with them,” said Sliman Bensmaia, PhD, the James and Karen Frank Family Professor of Organismal Biology and Anatomy. “On the motor side, we want to understand, how does the brain naturally control the hand? How can we speak the language of the brain, and be able to recognize that language when moving this robotic hand? On the sensory side, when we touch something, how is it that the nervous system responds to that? And how does that neural response give rise to a perceptual experience?”

Later this year, the research team plans to get Imbrie set up with more than just a VR headset — they are working to integrate a cutting-edge robotic hand with a robotic arm that he will be able to manipulate using the same electrodes that he uses for the VR system. While the technology is far from ready to hit the market, the researchers are thrilled with the work they’ve done with Imbrie so far.

“While the work with Scott is still very early, there are so many potential applications for this research in the future,” said Nicholas G. Hatsopoulos, PhD, Professor of Organismal Biology and Anatomy and Neurology. “This could help us develop technology to allow those who are paralyzed or who have lost a limb to do basic daily activities, like dressing or feeding one’s self, working on a computer, and even getting up and walking using an exoskeletal robot.”

The investigators hope to find additional quadriplegic subjects who may be interested in participating in this study, and stress that they are looking for candidates across a wide ranges of injury types and abilities.

Imbrie himself is eager to participate in the project for as long as the electrodes are functional and he is able to help provide more data for the research, even knowing that he likely won’t benefit directly from the outcomes of the study. For him, it’s more important that the work be able to help others.

“When I was first injured, I was a quadriplegic,” said Imbrie. “As time went on, things came back. I still have some limited abilities and everything. But I think about the people who have no ability to move or anything. And I know one day that this study is going to make it able to give someone an opportunity to have use of a limb in some form or fashion, whether it’s their own or if it’s a robotic limb. And that’s going to be really cool.”

For more information on this ongoing research trial and eligibility guidelines for interested candidates, please contact John Downey at downeyj@uchicago.edu.