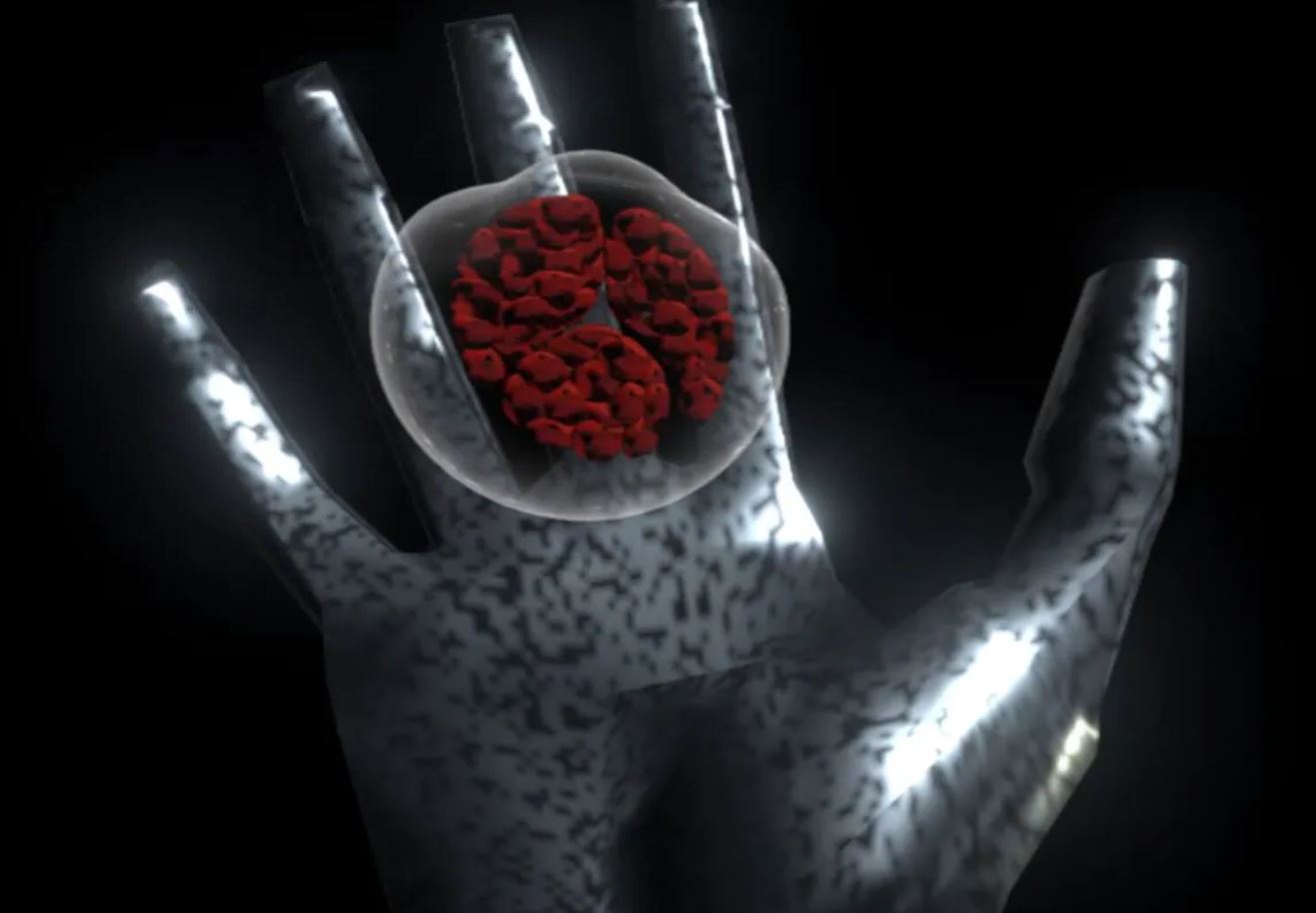 By msensory team13/12/2019December 16th, 2019No Comments
A screenshot from the Aerobanquets RMX VR experience. (Mattia Casalegno/James Beard Foundation)
The James Beard House is a circa-1844 townhouse in the West Village, its creaky floors filled with oil paintings and homages to the greatness of the culinary center’s namesake food writer and cook, who once lived there.

The historic setting, where chefs from all over the country come to prepare their finest cuisine, is an unlikely yet fitting place for a futuristic, trippy art-meets-dining meal. Through Dec. 29, the Beard House is hosting Aerobanquets RMX, a virtual reality experience wherein diners don headgear that transports them to a Dali-esque landscape, where they encounter food in ways that feel stranger than Alice in Wonderland stumbling across a tea party.

The exhibit, by Italian artist Mattia Casalegno in partnership with restaurateur Roni Mazumdar and chef Chintan Pandya of New York restaurants Rahi and Adda, raises questions that linger long after you experience it: Was that a meal or performance art? Is this the future of dining out? And an even more fundamental one: What is eating all about, anyway?

All the uncertainty starts when you and several other diners are seated in a darkened room on spinnable chairs, goggles strapped to your head. You’ve been coached on how to eat in the virtual reality world you’re about to enter — just line up your fingers along a sensor on the vessel in which the dishes arrive, and then hinge your neck back and tip the seven one-bite “courses” into your mouth. But that instruction doesn’t quite prepare you for what’s coming. 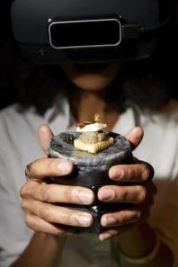 Your hands appear as strange, robotic appendages that wiggle unfamiliarly as you move them. Look down, and your legs have disappeared.

It’s delightful — plates and spoons fly around your head, and when you reach out to touch them … poof! They slide out of reach and disappear.

And at times it veers into unsettling, as when tendrils growing up from the ground (Are they tentacles? Roots?) at first seem benign, but slowly envelop you as a spider might surround its prey with silk threads. A murky mushroom forest grows beneath you.

There’s no straightforward plot to the affair, but food themes abound, as well as a motif of Persephone, the goddess of nature who was doomed to spend part of the year in the underworld — a pattern that explained the seasons and crop cycles to the ancient Greeks.

“The underworld looks so much like the upper world these days,” intones a resigned-sounding narrator — and if the voice sounds familiar, it’s because it’s Bravo’s “Top Chef” judge Gail Simmons. “And either way, no matter what, once you eat something, it’s gone.”

The food that arrives on floating platters resembles nothing you’ve ever ingested — that is, unless you treat science fairs as buffets. Tiny orbs circulate some bites, others look like spiky sea urchins — but such forms defy what lands on the tongue. 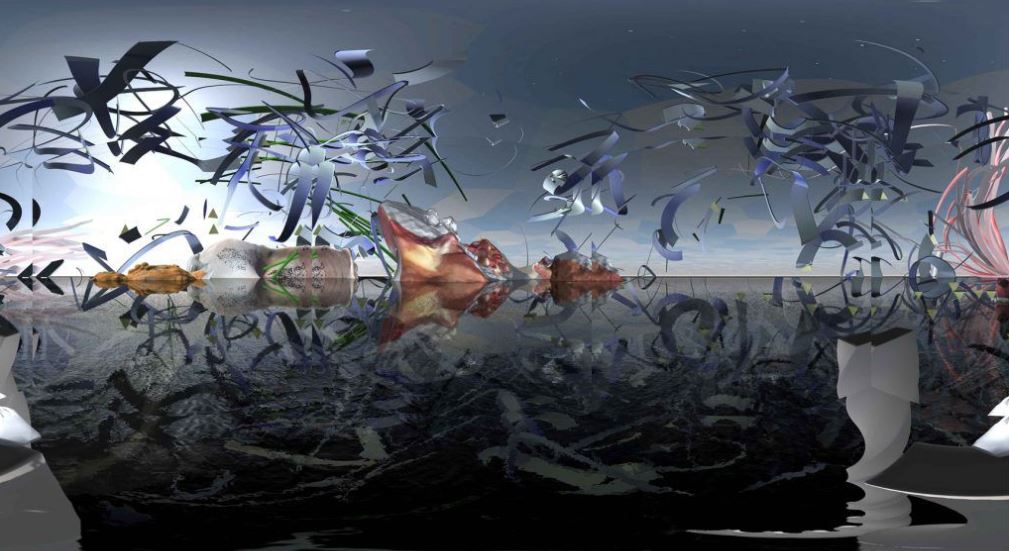 The dishes, revealed afterward on a menu card, play off the visual and aural cues, often in surprising ways. In one scene, slabs of meat morph into musical instruments as they descend all around you. “Think of the first time you bit your lip,” Simmons invites, immediately conjuring up ideas of flesh, consumed — and even a repellent notion of cannibalism.

The corresponding bite does taste of meat, though you learn later it’s actually Impossible meat, the new high-tech plant-based substitute, served with goat cheese and chickpeas.

At one point, a taste of slippery vermicelli noodles, accented by notes of pistachio and rose, echoes the scene, in which you are submerged in a sea. (I detected the pasta as I ate, but the flavors remained elusive until I saw the menu card.)

And while all of this has a giddily transporting feel, Casalegno’s goal isn’t merely entertainment. Nor is it to offer a meal. He’s after something more.

“Because we live our lives more and more detached from the physicality of reality — through our phones, we are detaching ourselves from the reality of life,” he says. “I wanted to work to bring us back to the realness, and eating is one of the most real things you can work with.” 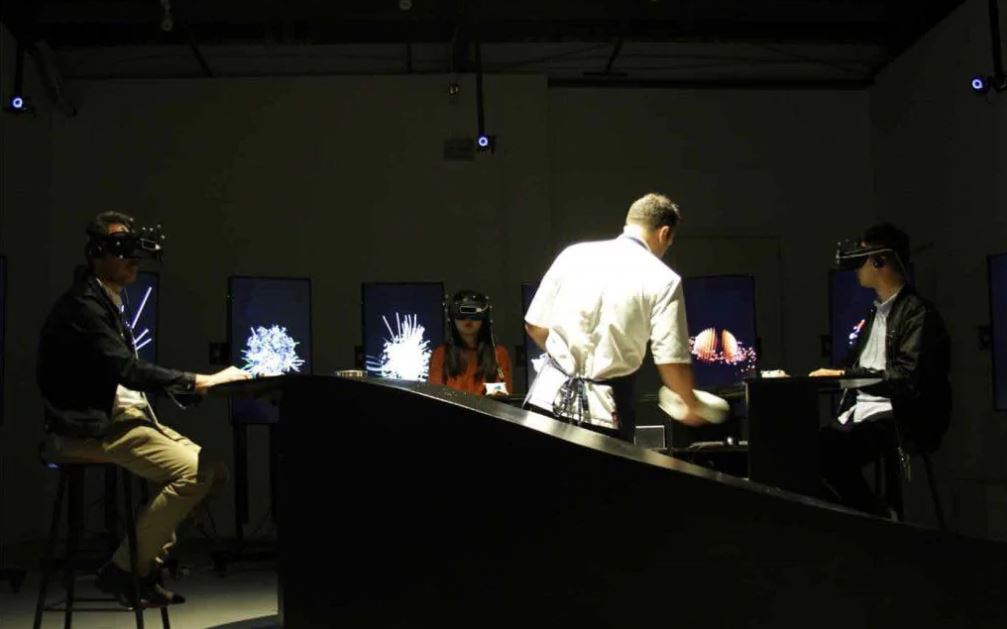 Casalegno, a native of Italy, was inspired by the “Futurist Cookbook,” a 1932 manifesto in which the Italian avant-garde reimagined cuisine and its sensory components. Whereas the Futurists incorporated perfume into meals and favored food in sculptural form, Casalegno turned to the medium of virtual reality to upend the experience of eating — divorcing the sense of taste from that of sight.

“Anytime we go to a restaurant, we have some ideas of how we should eat and what the things we are eating will taste like, whether it’s meat, fish or vegetables,” he says. “In our brains, we are already experiencing the taste. I wanted to use virtual reality to reframe the experience — in our brains, we are blanked out and we can start from scratch in a way.”

Another inspiration, the Persephone myth, he says, is meant as a commentary on how out of touch most modern diners are with the seasons, with the agricultural system that underpins their food.

And even if all this is high-concept art, could it also be the future of fine dining? Avant-garde dining is nothing new. At temples of high cuisine like the late El Bulli in Spain, Copenhagen’s famed Noma and even Washington’s Minibar, chefs use art and science to tinker with traditional forms of food and methods of ingesting them. Molecular gastronomy’s foams, liquid-nitrogen-fueled concoctions and liquids delivered via syringe transform recognizable foods into mind-bending dishes.

Mitchell Davis, chief strategy officer for the James Beard Foundation, who first invited the artists to offer their sensory-dining experience in the historic setting, says VR dining has much in common with those restaurants. “This is in that family of experiences, but at El Bulli, the technology happens in the kitchen, where hundreds of people worked really hard with science and equipment to change your perceptions of food and how you ate,” Davis says. “Here, the food is regular food, but all the technology is happening as you get it.” 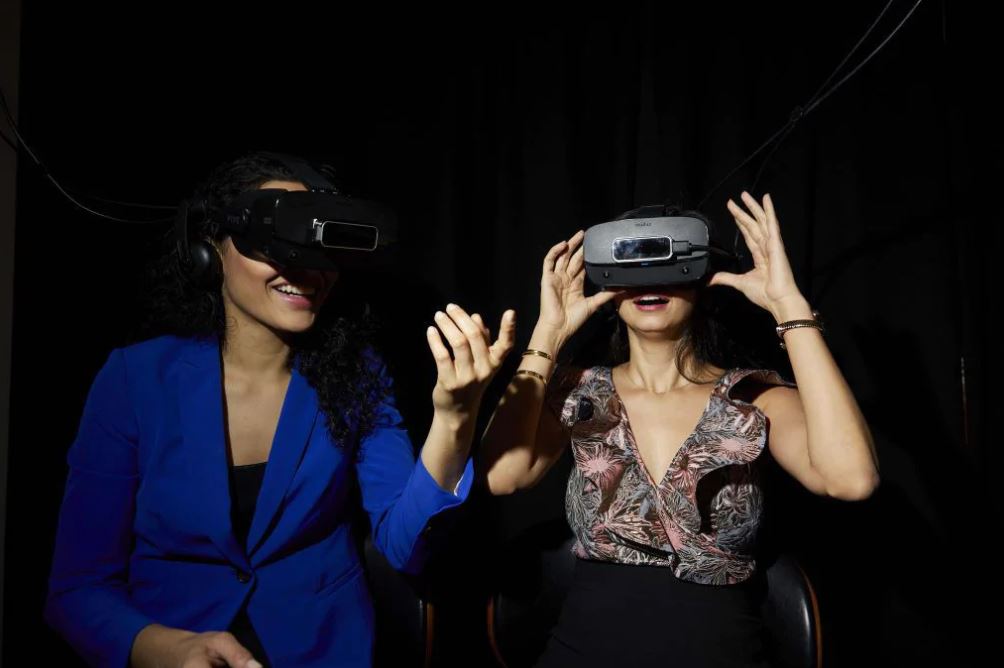 High-tech toying with reality has long been interesting to restaurateurs, chefs and diners. “Dark dining” — where adventure seekers dine in total darkness, with waiters often using night-vision technology to handle the food — has been around for two decades. City Social bar in London offers “augmented reality” cocktails, which appear with all kinds of effects when viewed through a smartphone app.

Virtual reality technology, long the playground of shoot-em-up gamers, offers restaurateurs yet another dimension to alter. Some have already begun deploying it. In Tokyo, the restaurant Tree by Naked incorporates VR into some of its courses. Ibiza’s Sublimotion — which at around $2,000 a head is one of the world’s most expensive restaurants — uses the technology, along with video projection, laser light shows and DJs, to create a “gastronomic performance.”

For now, Casalegno doubts that just any restaurant could simply add a VR experience to its menu; for starters, it would be technically difficult to pull off in an existing dining room, and the equipment is expensive. But he’s exploring the idea of creating a stand-alone VR dining space for collaborations with chefs.

Davis hopes the exhibit — and VR dining generally — offers more than just a novel outing for bored eaters looking for the latest gimmick. “I don’t want people to be so tired with the restaurant experience that it’s like we have to poke them,” he says. “Like, ‘Oh, we’ve done that, let’s eat in a balloon’ or something. I really want people to look at food differently.”

Source: This virtual reality dining experience is trippy — and might be the future of restaurants – The Washington Post