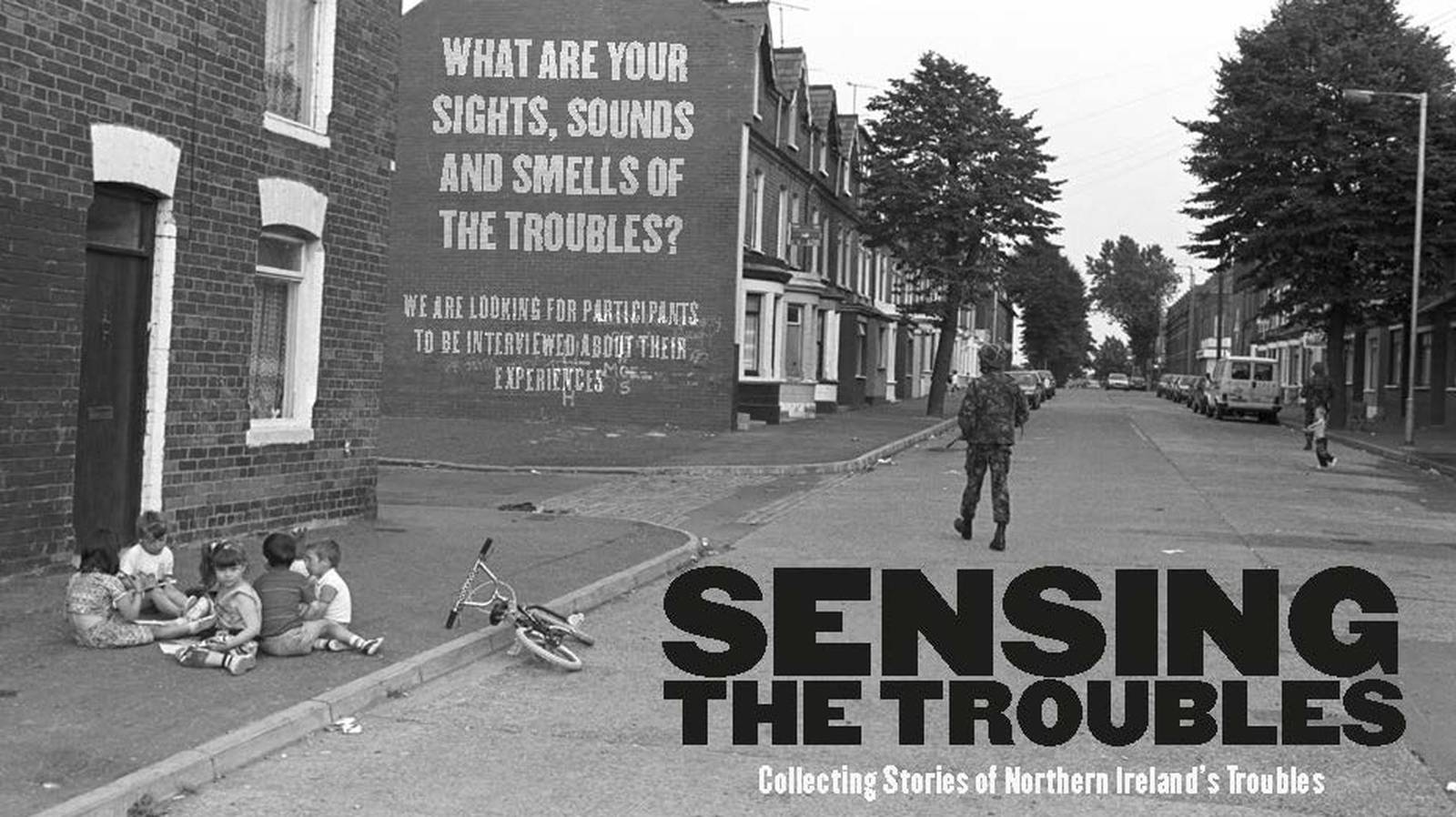 The sight, sound and smell of the Troubles: a sensory way of remembering the conflict | The Irish Times

Historian Roisín Higgins on her project: “By starting with the senses, what I am salvaging are the pieces that make us human”.

I speak to Kieran online, long distance. He talks about his childhood during the Troubles and throughout the conversation there is a push-pull between the narrative of normality wrapped around evidence of things far from ordinary.

About an hour into the conversation Kieran talks about going to see Kenneth Branagh’s film Belfast and how, for a moment, he thought he might have to leave the cinema such was the discomfort of watching what he described as “a style of memory” he may have “hidden a bit”. But then, he says, “you just pull that Kevlar shield back up again and just get on with things because I think to some extent that’s how people managed to condition themselve”’.

Belfast creates an evocative sensory world from the point of view of a child. Its resonance is derived from this important shift in perspective. The unexpected power of childhood sensory memories momentarily breached Kieran’s defences, and it is the potential of the senses to disrupt settled narratives that underpins my own research. I grew up during the Troubles and am writing a different kind of history of those years. One that illuminates everyday experiences through a sensory lens.

As part of my research I am talking to people about their memories of the sights, sounds and sensations of the conflict. Asking people to get out of their minds and into their bodies is a really interesting way to begin a conversation. No one yet has been overwhelmed by the experience. But when I leave Elizabeth’s house I go home and eat as though I will never be full, trying to quell the sadness of what I have heard.

What emerges are glimpses of lives lived against a background of persistent, often low-level, tension. Fintan grew up just outside an idyllic coastal village. He could hear British soldiers (dropped from helicopters) in the bushes as he walked home in the deep dark of a country night, “noises…that weren’t there before…, the wee bit of metal slapping against the rifle…Every now and again you’d hear a bit of breathing or a footstep”. Marian remembers walking to a nightshift at the Royal Victoria Hospital on the Falls Road in Belfast, the soldiers on the street were camouflaged, “…you wouldn’t have seen them [in the dark]…but yet you would have seen a movement and you knew there was something there…”

Members of the security forces also anticipated the eyes of invisible forces. Jean, who arrived in Belfast as an 18-year-old, worked as a “searcher” on the security gates going into the city. She wore a red hat as part of the uniform of the military police and felt like a target who could be easily identified by snipers, “that was there all the time. [That] I was in somebody else’s sight, that I couldn’t see [them] myself’.

Roger, who was in the RUC, says “there was almost a taste from [a] riot… You would feel that maybe your mouth got a little bit drier”. He identifies it as a sign of stress. I ask Fiona what comes up for her if I say “taste”, and she thinks for a moment. “Bitterness”, she says quietly, “bitterness”. I ask if it’s literal, can she feel it in her mouth. “When I think about it, yeah,” she says, “my mouth dries…”

I speak to a group of women in a community centre north of Belfast. They talk about working in offices and shops in and around the city centre when they were young, and the sensations associated with nearby bombs and almost daily bomb scares; of bargains legitimately and illegitimately obtained.

One woman had a Saturday job in a department store and says, “the number of people that went flying out through [the] door [with unpaid items] as soon as the fire alarm went off was unbelievable. You couldn’t have caught them all. They were running from every aisle.” The conversation moves effortlessly from the shocking to the hilarious and this is not the only time someone says that humour was how many people coped.

One woman says, “It’s only when you look back now, when you know what normal should be… What bit of normal … did we have? You know, and I kind of think… it’s not that it’s easy to forget, it’s easy to forget how bad the things actually were. Because we lived through it on a daily basis, without any thought. Because you had to get on. You had to go to school. You had to.”

I nod because this is exactly why I am writing this history. I want to capture something of the abnormality of daily life and the impact that had on people.

It has now been 50 years since the worst year of the Troubles. In 1972, 497 people were killed in the north of Ireland and a series of grim anniversaries are currently unfolding. I find myself captivated and moved by the stories of younger lives now carried within older bodies. My heart aches at the thought of 17-year-old Marian, beginning her life as a student nurse 50 years ago in that awful year.

She tells me about the hospital running out of clean gowns and sheets the weekend of the Abercorn bomb in March 1972. A little girl was lying in bed, on white paper sheets and in a white paper hospital gown. She caught hold of Marian’s hand and said, “Have I died? Am I in heaven? I was in an explosion.” “And,” Marian says to me, “she just held on to me like a wee grip and I said, ‘No pet, you’re not in heaven. You’re in the hospital’.”

Working on this project I have often had an image of myself walking through the wreckage of conflict, collecting debris. I have also come to realise however, that by starting with the senses, what I am salvaging are the pieces that make us human.
Roisín Higgins is a Leverhulme Research Fellow, 2021-2. She is an Associate Professor of Modern History at Teesside University. If you would like to contribute to Sensing the Troubles, visit: sensingthetroubles.com. Some names have been changed.

Source: The sight, sound and smell of the Troubles: a sensory way of remembering the conflict – The Irish Times

Those who are critical don’t like being criticized, and those who are insensitive have a deficiency in their senses.