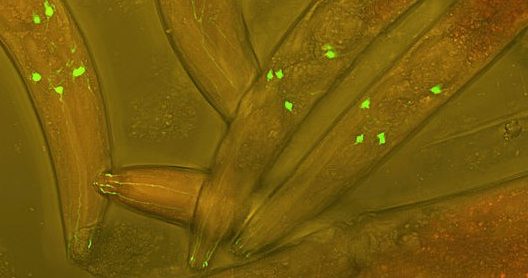 The smell of geosmin is unmistakable: it’s the odour that permeates the air after a summer rain squall or fills your nose while gardening. It’s the smell of wet soil — an earthy, almost comforting scent.

But as a new study just published in the journal Applied and Environmental Microbiology points out, that smell also has a particular purpose. It is made by certain kinds of bacteria that are known toxin producers. This acts as a warning to C. elegans, a common type of worm, that the bacteria they are about to graze on is poisonous. The chemical is an aposematic signal that triggers the blind worm’s sense of taste just like a caterpillar’s bright colours or a pufferfish’s spines tell a sighted predator to stay away.

Just a few millimetres long, nematodes like C. elegans are tiny but found all over the Earth, including Antarctica. Nematodes are also the most abundant animal on Earth, accounting for about four-fifths of the global animal population. Researchers often use C. elegans as a model organism in their studies because their biological systems are less complex but similar to those of humans.

“Through our study, we found that geosmin in Streptomyces coelicolor, a bacteria that is toxic to C. elegans, does not appear to have any role other than as a signal,” says Brandon Findlay,  associate professor in the Department of Chemistry and Biochemistry and the paper’s supervising author. “It doesn’t help the cells grow, eat or divide. It doesn’t ward off predators directly. It just seems to be there as a warning.” He says he is unaware of any other bacteria-produced chemicals that act in that fashion.

The study was led by Liana Zaroubi (MSc 21), one of Findlay’s students who is now pursuing her PhD at Simon Fraser University. 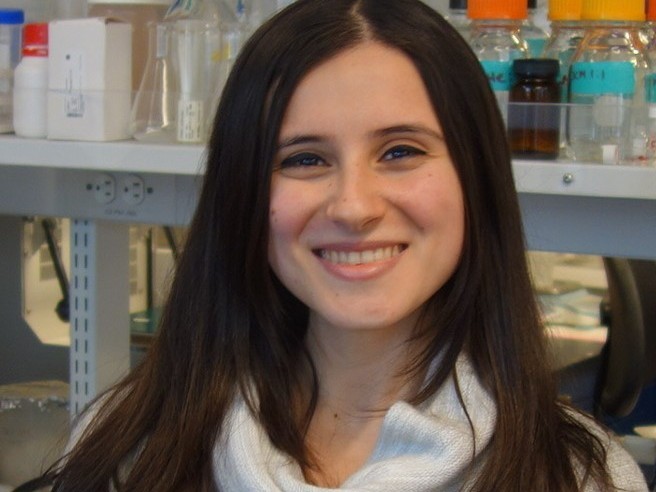 Liana Zaroubi: “I eliminated many hypotheses before finding that geosmin acted as a warning signal.”

A scent of danger

Zaroubi acknowledges that it took her some time to arrive at the idea that geosmin was aposematic.

“It was definitely not obvious,” she says. “I eliminated many hypotheses before finding that geosmin acted as a warning signal. However, each ruled-out experiment revealed important clues that helped elucidate the mystery that is geosmin. We followed the science and I believe that was key to this discovery.”

The researchers used several strains of C. elegans to test their hypothesis. First, they observed the movement and behaviour of worms on agar plates where geosmin was present but bacteria was absent. In this instance, the worms reacted adversely to the presence of the compound, moving rapidly with frequent changes in direction. However, mutant nematodes without the chemosensory ASE neuron, which is dedicated to taste, were observed to behave normally. Geosmin itself appeared to be non-toxic to C. elegans.

A separate experiment was designed that included Streptomyces coelicolor bacteria. The researchers observed the worms avoiding their prey when they could taste the presence of geosmin. But those without the ASE neurons devoured the toxic bacteria, with predictably fatal consequences for both predator and prey.

A taste of evolution

Geosmin is a very pungent compound, detectable by humans at five parts per trillion. While many find its odour pleasant, it is also a common bacteria-created contaminant in human drinking water that can cause water to taste like dirt.

The extent of geosmin’s biological uses is still not completely understood. However, the researchers believe the compound offers insight into how bacteria and their predators interact and how complex behaviours like toxin avoidance evolve.