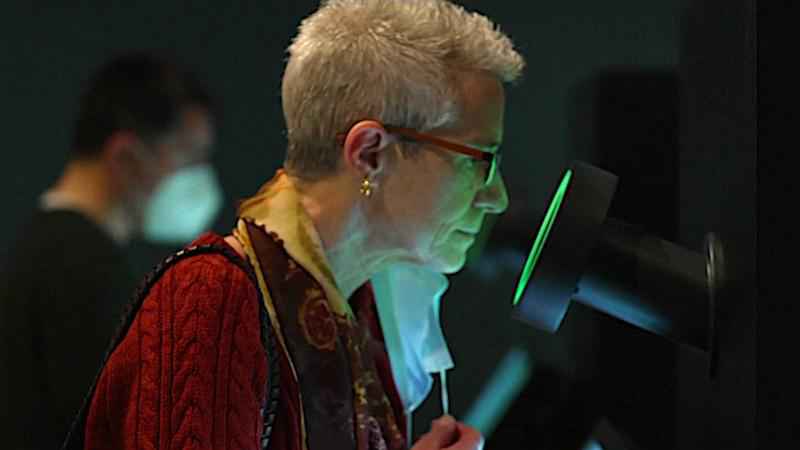 Works of art brought to life with scent technology | WNYT.com

Fragrance fills the air in the Museo Nacional del Prado in Madrid.

Ten scents waft through this exhibition via four diffusers connected to monitors.

This Olfactory exhibition called ‘The Essence of a Painting’ is taking on a new approach – asking guests to use their sense of smell.

Alejandro Vergara, Head of Conservation of Flemish Painting and Northern Schools at the Museo Nacional del Prado and curator of the exhibition, explains:

“What we are doing originally here is trying to call attention to his art and the way we decided to do that, after much thinking, was simply to isolate one of the paintings of the five senses, the one that deals with the sense of smell. And to use it to focus our attention on another thing that we don’t pay much attention to which is the way in which the past smells.”

The aptly named ‘Smell’, a 17th century painting by Jan Brueghel the Elder and Peter Paul Rubens, is one of the artworks on display.

Visitors are able to smell the elements present in the piece.

“The painting has about between 80 and 90 objects that produce odour of some kind, mainly flowers and what we have done is we’ve selected 10 of these objects and we have brought some screens that were created by a technology called “Air perfume” by the company called Puig. And we use that technology so the public can come to the room, they can press the screen and a rose and iris, different flowers, a perfumed gloves, for example, which was very typical of the 17th century, they can press the screen and the smell comes out and they can smell it,” says Vergara.

The work is a garden of trees and unique plants that Isabel Clara Eugenia and her husband had in Brussels at the beginning of the 17th century.

More than 80 species of plants and flowers are represented, some relate to animals such as the hound dog or the civet, and different objects relate to the world of perfume, such as perfumed gloves, containers with fragrant substances, an air freshener that is heated in a luxurious brazier and stills for distilling essences.

It’s thanks to technology by the company Puig that visitors can experience a new side to the paintings.

Gregorio Sola, curator and Senior Perfumer at Puig and Academician of the Academy of Perfume, believes the olfactory machines will help visitors get more out of a trip to the museum.

“The fusion of two senses, visual and olfactory, makes your memory much more retentive. So, I think that adding smell to a painting will make people remember Jan Brueghel and Rubens much more. It’s a wonderful painting with incredible detail. The more I look at it and explore it, the more I discover a different detail.”

Sola has created ten fragrances related to the painting, allowing visitors to explore with their smell.

“I think it’s a fantastic experience. The smells are really authentic, so it’s beautifully done, which gives you a different dimension when you see the painting, smell it. There have also been experiments with making the paint move, in this case you can smell it and for me it was a very pleasant surprise,” says visitor

“The least (I liked) is the animal, it is not the best, but the most (I liked) the orange flower or the jasmine are very good, the others are good but those are the ones I liked the most,” says visitor Alan Llanos.

“Well I think it adds something but I don’t like painting more because of the smells. So it’s nice and it’s good but the painting is still the most important thing to see.”

Yolanda Sandoval is a tourist guide who teaches people about the art at the museum. She thinks this will her work easier.

“A painting can be a bit boring, a painting has many readings but they have to explain it to you to be able to capture the whole essence of the painting. This helps because you are smelling the essence. It’s a very good initiative, that I hope will be extended to other museums,” she explains.

The main work of this exhibition, Smell, is part of the series of The Five Senses, exhibited in the same room.

In 1636, the five paintings were in Madrid, in the collection of King Philip IV.

They were among the monarch’s most important works.

The exhibition is open to the public until July 3.