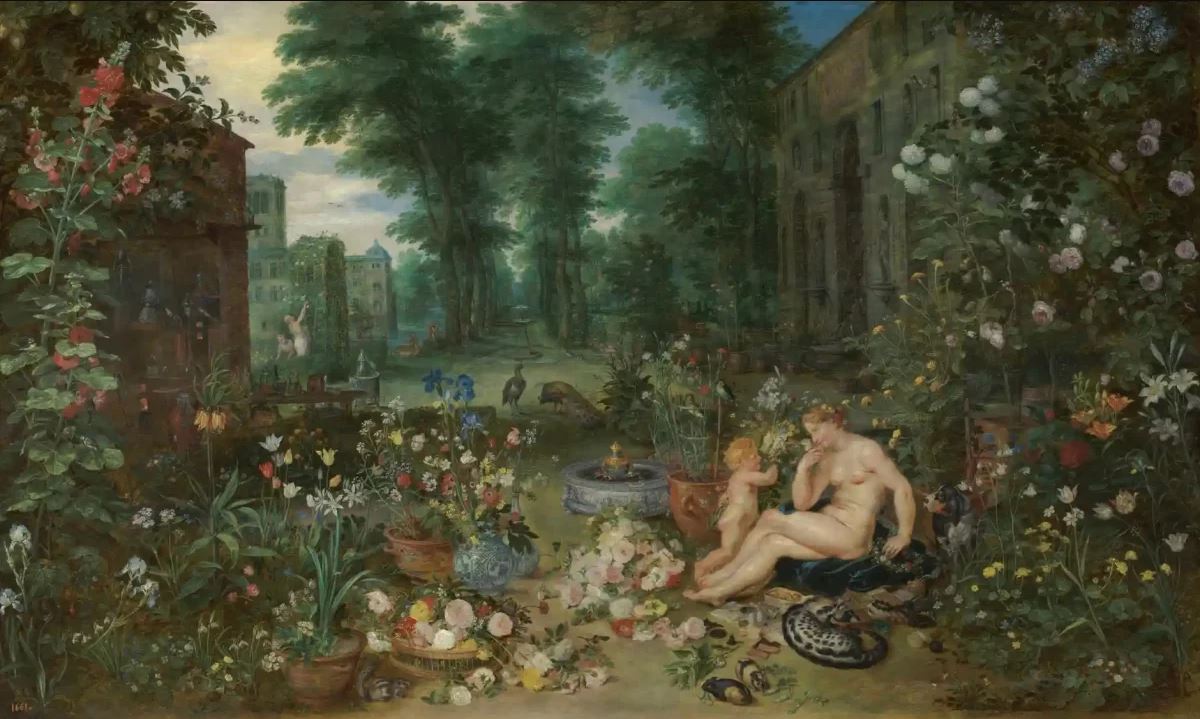 Flowers and trees bloom in Jan Brueghel the Elder’s sumptuous garden, where peacocks and civets prowl the grounds as a child plucks a petal from its stem, inhaling the fragrance. Since the painting of The Sense of Smell in the 17th century, viewers have said the scent of spring was so strongly suggested, it seemed to emanate from the canvas.

Now, visitors to the Prado Museum in Madrid can literally inhale the scents of the Flemish Master’s painting. For “The Essence of a Painting. An Olfactory Exhibition,” Alejandro Vergara, the Prado’s head curator of Flemish painting, enlisted a team of olfactory experts to re-create 10 elements from the scene.

Researchers identified in the painting some 80 plants and flowers, as well as animals with a strong sense of smell, such as the scent hound and guinea pig. They also spotted several objects related to perfumery, including scented gloves and vessels for distilling essences.

Gregorio Sola, senior perfumer at Puig and an academician of the Perfume Academy, re-created 10 scents associated with the incredible array. Visitors can now sample the perfumes from four diffusers in Room 83 of the Prado.

At the show, viewers will discover a bouquet of roses, jasmine, orange blossom, fig tree, and kid gloves scented with ambergris, based on a real formula from 1696. And while the smell of guinea pig was wisely left to the imagination, Puig’s diffusers dispense the sharp musk of the civet which lies coiled in the bottom right of Brueghel’s painting.

Civet essence commonly used in historical perfumes given its longevity, however “no animal has been harmed here,” Sola explained in a video released by the museum. Instead, the perfumers used synthetic bases or the highest-quality natural essences.

The Sense of Smell is part of a series of works about the five senses executed by Brueghel and his friend, the seminal Flemish painter Peter Paul Rubens, between 1617 and 1618. Ruben represented the five senses as allegorical female figures, while Brueghel contributed the lush settings.

Sight, for example, shows the sense allegorized as a young woman examining a painting of Christ restoring the vision of a blind man. That painting within a painting appears in a room packed with pictures, astronomical instruments, and other eye-catching curiosities.

In the Prado’s video accompanying the exhibition, Vergara explained that he hoped the olfactory exhibition would inspire viewers to seek out the other works in the series.

“When people come to see [this exhibition], they’re going to be opening a window, a door, onto a different culture, for me as well actually. So, this something of a learning process, which is one of the most enjoyable things in life,” he said.