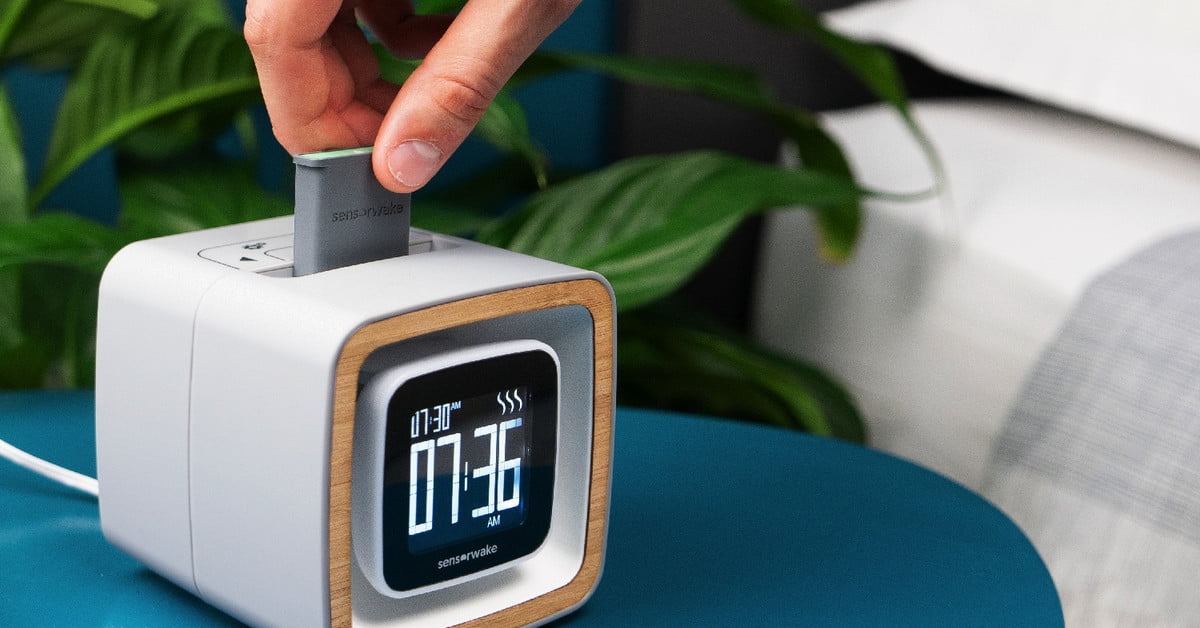 Seaside or pine forest? This alarm clock wakes you to the scent of your choice

Like a lot of people, we’re usually woken up in the morning by the insistent beeping of our smartphone alarm. That is a method that is certainly effective at rousing us from slumber, although it’s not exactly enjoyable. Could there be a better way? That is the question that the folks behind a new Kickstarter campaign clearly asked themselves. To answer it, the Google-accelerated French startup Bescent has created an alarm clock capable of combining sight, smell, and sound for an altogether more pleasant wake-up experience.

The so-called Sensorwake olfactory alarm clock offers a mix of blue halo light, five preloaded melodies and — most excitingly — scent capsules. There are 16 different scents in total, ranging from the smell of ground coffee or orange juice to the evocative aroma of the seaside, a pine forest, or a freshly cut grass meadow. These scents have been created in collaboration with Swiss fragrance manufacturer Givaudan and use dry diffusion without any “liquids, heating elements, mist, or mess.” A single capsule promises to last up to 30 wake-ups, after which you simply slot in a new one to repeat the process.

“Like many teenagers and young adults, I hated waking up early,” Bescent CEO and founder Guillaume Rolland told Digital Trends. “I needed an alarm, but I thought there had to be a more soothing way to be woken up than the loud cell phone alarm I was used to. Seeking a more motivating way to wake up, I turned to the sense of smell. In 2015, when I was 18, I began building prototypes in my garage. That same year I represented France at the Google Science Fair and my innovation was recognized as ‘one of the top 15 that could change the world.’”

Rolland said that Sensorwake will appeal to anyone who wants to wake up in a better mood. (And, let’s face it, pretty much everyone falls into that category.) He continued that he sees the product having a particular appeal to both people who frequently travel for work and students who want to wake up better rested for class.

As ever, we offer our usual warnings about the risks inherent in crowdfunding campaigns. However, if you wish to go ahead and get involved you can do so by visiting the project’s Kickstarter page. Having only been up and running for a couple of days, the Sensorwake olfactory alarm clock has already smashed through its crowdfunding target, suggesting that Rolland was quite right in thinking that there is an audience for this.

An alarm clock with two scent capsules will set you back $59, while other higher-priced options come with more capsules. These capsules are also available to buy separately. Shipping is set to take place in November.

Source: Seaside or pine forest? This alarm clock wakes you to the scent of your choice