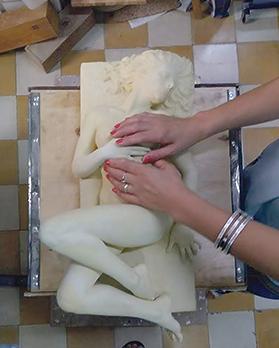 Sculptures perceived exclusively through touch, rather than sight | Times of Malta

Born with the aim of involving the visually impaired community in visual art, Tactile is an exhibition with a difference. Adam Brimmer catches up with curator Jesmond Vassallo to find out how the collection of sculptures is to be experienced.

Born with the idea to involve the visually impaired community in visual art, Tactile is certainly an exhibition with a difference. Bringing together a set of sculptures created by Maltese and foreign artists the exhibition in fact is experienced using a different sense to the norm.

Exhibition curator Jesmond Vassallo explains how, from all genres of visual art, sculpture is made up of forms that can actually be perceived exclusively through touch, rather than sight.

Thus, while museums typically sport ‘do not touch’ signs in front of exhibits, Tactile takes the opposite route – the message being, ‘please touch’.

The exhibition, which its curator terms “a sensory voyage”, included input from visually impaired people: the exhibition places sighted people at par with those deprived of sight, as they get to experience the sculptures while wearing a blindfold, ensuring that all visitors are treated equally. I caught up with Jesmond to find out more.

How did you finalise the list of participating artists?

I have a good relationship with my fellow colleagues and all these participating artists and wanted to make sure that this exhibition would bring together very well-known local sculptors, discover new ones, and bring an international aspect to the mix.

The artists’ choice of material was a very important guideline that helped me come up with the participating list.

I wanted to involve artists who work with different three-dimensional materials. Apart from bronze, ceramics, Carrara marble and plaster of Paris, we have welded metal, blown glass and mixed media. Thanks to the EU-Japan Fest, Valletta Design Cluster and Valletta 2018, I was also able to invite international artists hailing from Japan, France and Italy to participate.

The exhibition is described as ‘concealed’ – can you elaborate?

Throughout October, the 12 sculptures will remain concealed. For this reason, the sighted audience will enter a dark room blindfolded, since touch is the only sense that will be used to understand the works.

When the exhibition is dismantled, and the sculptures are no longer on show, visitors can opt to view a catalogue containing photographic reproductions of the works. This will be the only way in which these works will be revealed, so to speak.

The aim is for the experience  to remain a purely tactile one in the exhibition visitors’ memories.

The logistics are pretty much the opposite of the usual ‘visual’ exhibition. Do you think people will ‘get’ it, in a country where a three-legged horse created controversy?

A week before the exhibition, I set up the whole exhibition to be able to carry out trials and to test it on colleagues and close friends.

The people who accepted my invitation to visit were able to engage with the pieces and feel this empathy I was trying to convey.

So yes, I think that people will ‘get it’, as long as they are open to a novel experience. Tactile’s core values are that of sharing a common language with the visually impaired, and also about being mindful of one other.

What kind of research did you carry out?

The research took place in two stages: the first was more about finding out whether this community felt that their inclusion was being considered by artists, and it was there that we spoke about ideology.

The second part was all about praxis. Here I staged accurate simulations of what was to happen in the exhibition. That way I could understand how the visually impaired felt about it, and at that point they gave me very important feedback which was to be my backbone material for producing it.

As curator what was your top priority for this exhibition?

To make this exhibition safe, accessible and curious for visually impaired and sighted people.

Showing empathy and imparting values of non-discrimination was also a top priority. I also wanted to examine the meaning of sculpture, as well as to find out if the language of sculpture is still as powerful as it once was when it was first discovered in prehistoric times. I am curious to find out more about this from the audience’s feedback.

How important a role does the music play and what can you tell us about it?

Music per se does not have a role in this exhibition as, during my research I found out that it is safer for a blindfolded person to walk in a dark space in silence.

However, although music does not have a role, sound does. But, I leave it up to the curious visitor to discover how.

What were the biggest challenges in translating the idea into reality?

There were numerous challenges, however the toughest was to seek ways in which to involve young visually impaired people in this project. I urge the public to let any young persons with visual impairment know about this exhibition, and to encourage them to visit.

Can you describe the process that a viewer will go through?

Before entering the exhibition space, alcohol sanitiser is used to disinfect the visitor’s hands. They will also receive an eye mask, which they’ll be expected to wear for the duration of their visit. A maximum of two visitors are allowed into the space at any one time.

Once inside, visitors will walk through the exhibition space by holding on to the edge of the display table.

As they move along from one sculpture to the other, they’ll be able to feel the Braille text description with their fingers.

This action will in turn trigger an audio recording corresponding to the Braille text and to the piece they will be standing in front of.

As visitors exit the exhibition, they are encouraged to share their thoughts and experience on social media.

Once the exhibition closes, the artworks can be seen only through a photo reproduction in a pre-order catalogue.

Would you say that this is one of the first exhibitions in Malta that can also be experienced by blind people?

From the feedback I got, I think that this is the first international sculpture exhibition held in Malta to place sighted and visually impaired individuals within a space that exposes them to the exact same experience.

What is valuable for me is to see a larger participation of visually impaired people at visual art events.

The Braille text does correspond to the recording, and it is intended to allow both sighted and visually impaired communities to access the same level of information that is made available to them. At Tactile, sighted visitors are not at an advantage within a visual art setting this time round.

Tactile runs until November 4 at the Valletta University Campus.