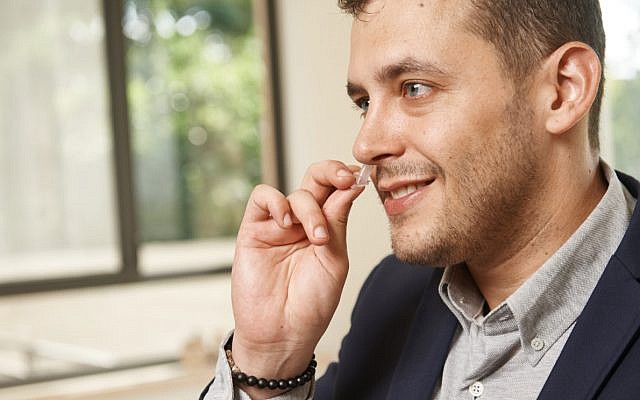 A new device that is inserted into the nostrils could help users resist the lure of delicious food aromas, curbing appetites and easing the way to weight loss. Or so believes Adva Beck, the founder and CEO of Israel’s Beck Medical Ltd.

Beck noticed one day, while eating a peach, that her stuffy nose made her favorite fruit not as desirable, and started to look into the matter. She found that scientific research has proven that smell is strongly connected to the metabolic function of our body, as well as to weight management and food preferences.

“The olfactory organ physically comprises receptors for many metabolic related hormones” said Beck in a phone interview, underlining how food smells affect us by making us hungry, especially for what we have smelled or similar foods. 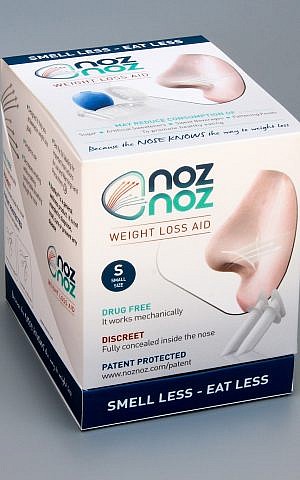 She thus created NozNoz, a soft silicone device inserted inside the nostrils and defined by Beck as “contact lenses, only for the nose,” which can be worn during the day and removed at night.

Israeli startup Beck Medical Ltd. has created NozNoz, contact lenses for the nose, to curb smells and help cut back on hunger (Courtesy)

However, some precautions must be taken: the device should not be used for more than 12 hours a day, should be taken out while sleeping, and has to be replaced every two weeks. Also, its use is discouraged if the consumer has a propensity for some conditions like nose bleeding.

“The nose knows… the way to weight loss,” Beck explained, explaining the name of the product, NozNoz (Nose knows). In fact, the small accessory “may enhance weight loss efforts, help users manage their weight and promote healthy eating,” she said.

NozNoz could be a solution for those countless people who try to lose weight through daily efforts, but don’t manage. “It’s like climbing the Everest — it is possible, but only very few can actually do it,” Beck said.

More than 1.9 billion adults were overweight in 2016, according to the World Health Organization.

NozNoz is the first product to induce a reduction to smell for weight loss that has been tested on humans, Beck said, while all other studies were conducted on animals.

A small pilot clinical trial run by Dr. Dror Dicker, head of the Obesity Clinic at Hasharon Hospital-Rabin Medical Center in Petah Tikva and president of the Israeli Association for the Study of Obesity, gave encouraging results.

In Dicker’s study, 65 people participated in a three-month trial. Of these, 37 used NozNoz, while the control group of 28 people was given saline drops. Both groups lost weight, but NozNoz users who were aged 50 or less witnessed a weight loss that was almost double that of their peers in the control group: 8.3 kilograms (18.3 pounds) vs 4.3 kg for the saline users.

More studies are needed to prove the efficiency of the product, but Beck believes it could be useful to many.

NozNoz was presented at the 2018 European Congress on Obesity held in Vienna in May. Medicalxpress.com, an online medical and health news service, said that according to the data displayed at the congress, “the nasal device worked as planned, causing a significant drop in olfactory sensitivity.”

Looking to the future, Beck said that the company plans to develop additional models of NozNoz and other nasal-based devices to tackle problems related to smoking, diabetes and drug use.

Yoga is almost like music in a way; there’s no end to it