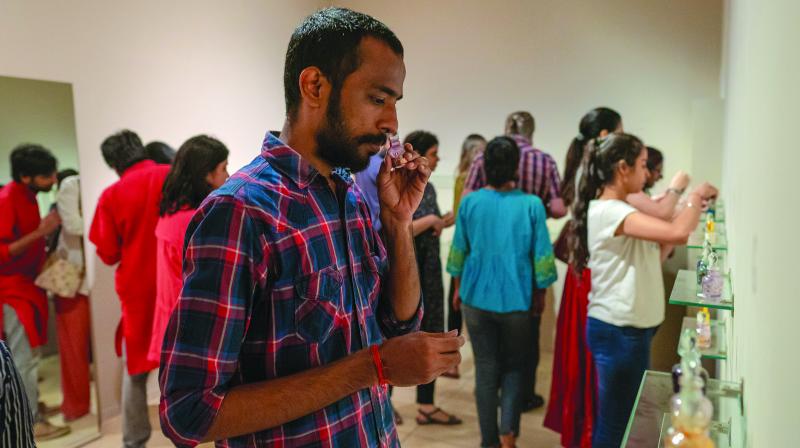 Scents and the city | Asian Age

An amalgamation of art and anthropology, the exhibition challenges people’s way of thinking about the kind of work that can be put in a museum.

In order to capture the smells of the capital, recently, an exhibition titled Smell Assembly was held at the Kiran Nadar Museum of art.

Exhibitions are a visual treat… atleast that is what we thought. But, now the case has changed — kudos to an exhibition on the smells found in the capital.

Just how one should never judge a book by its cover, one must not judge a city by its appearance either. There’s a lot more to a city than what meets the eye. Just look around you or should we say, “smell around you!”

From the agarbattis of Majnu ka Tila to the smell of fresh maach at the bazaars of Chittaranjan Park, Delhi is a concoction of multiple smells and fragrances. In order to capture the smells of the capital, recently, an exhibition titled Smell Assembly was held at the Kiran Nadar Museum of art.

The exhibit showcases the works of Ishita Dey and Mohammad Sayeed. The samples collected by the two  include smells and fragrances found from cab drivers of Sakha, sanitation workers, smell-workers of Gadodia market, manual scavengers, attar makers and associated clusters

Akansha Rastogi, the senior curator of the show, expresses, “The urban experience gets recorded through these smells. Each locality has its own specific smells. These smells have an importance in the life of a neighbourhood.” The methodology behind the works involved Ishita and Sayeed creating ‘smell maps’ of different locations checking the intensity of every smell available.

Speaking about the production and curation process, Rastogi says, “It was a challenging project to do because smells are also cultural, political and social.” But that was not where the challenges stopped. She elaborates, “It is difficult to contain smells as they escape. You lose it the moment they spread.” In the case of 75 unique smells, it was a difficult job to ensure that the effect of the previous smell did not last.

An amalgamation of art and anthropology, the exhibition challenges people’s way of thinking about the kind of work that can be put in a museum. She further explains, “It challenges both the disciplines of visual art and anthropology. It was a challenge for them (the artists) as well, as we were not making installations.” She adds, “We were making an artistic experience which would give a sense of walking through the city and going into different imaginary scapes.”

Akansha calls the smells of a city “a treasure.” But are they the most underrated treasure? She answers, “I think it is definitely an understudied subject and that is why this project received a lot of attention from people from different walks of life.” She believes that each smell is a ‘microsite’ in itself or, as she explains, “the units and subunits that began to evolve within a neighbourhood.”

Seeing art or smelling art, what’s more important, one might wonder. The curator opines, “One would not like to hierarchise the two senses. The purpose of the exhibit is to de-hierarchise the senses in a museum of visual art.” To sum up the essence of the exhibition, she says, “I think what it has done is to sensitise ourselves to the smells around us.”

Source: Scents and the city