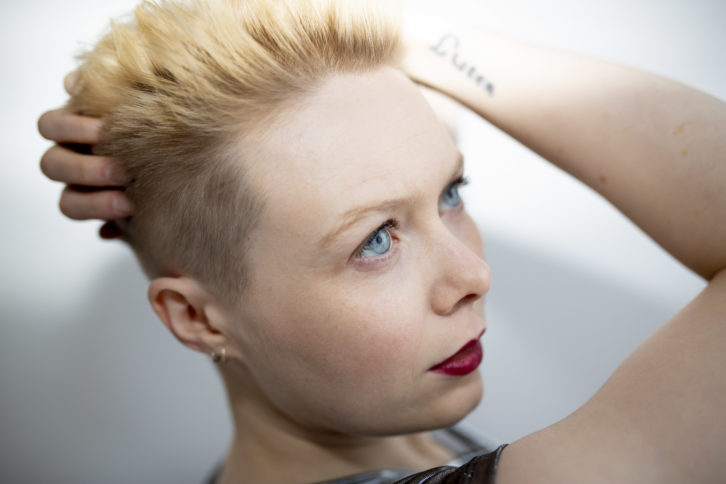 By msensory team11/11/2019No Comments
Hey friends and PSNEurope readers! This month I’d like to introduce you to a very special lady. Meet Rookes, a solo artist with one of the most mesmerising voices I’ve ever heard. Funny story, we met at AIM’s Women in Music event in 2018, when I was trying to do a runner and find a quiet part of the hall to chin a glass of wine after being part of a fairly intense panel. Rookes turned around and said “are you following me?” Obviously I wasn’t, because that would have been super creepy, but it’s definitely up there in terms of a good ‘how I met someone’ story. Anyway, we got chatting, she gave me a card and I looked up her music online. Wow. That voice. Obsessed. So when she got in touch and asked me to master her next EP I was pretty buzzing. But having a column in PSNEurope gives me the chance to be nosey, so I wanted to find out a little more about the creation of the EP, Liminal, and how she goes about performing it live.

Hey Rookes! Your EP, Liminal, is out this month, and it’s absolutely beautiful. One of the things I first noticed about you as an artist is your incredible voice. Has singing always been part of your life?

Thank you very much! Singing has basically always been there. Both my parents sing and there was a lot of music in the house. When I was eight, my parents started taking me along to the production rehearsals of a light opera company they were a part of. By 10, I had wangled myself onto the stage with them, and there is still a slightly operatic quality to my voice even now, especially when I’m fully projecting. It took me a long time to accept that as I grew into adulthood – I wanted so badly to sound like the pop stars I saw and heard everywhere, but I just didn’t – my voice had a totally different quality. For years, I didn’t really feel like my voice fitted anywhere in terms of musical genre.

It was only really when I revisited the ‘80s female ballad artists, like Annie Lennox, Kd Lang and Jennifer Rush in my early twenties that I started to identify the power in my voice. Then artists like Florence + The Machine and Bat For Lashes started appearing, who don’t have typically ‘pop’ voices, tonally speaking, and it occurred to me that maybe my voice could belong somewhere if I created a place for it. I’m a stickler for vocal technique now. I have a three take habit – I can normally nail it in three takes. For ‘Constellations’ I nailed it in just one take, which felt miraculous.

Your EP has a very defined sound – has this been developed over time or did you have some idea of what you were aiming for?

A little of both. I’m both a micro and a macro person, which means I’m obsessed with detail but equally obsessed by stepping back and seeing how well the details fit into a bigger picture. After The Game & The River (my debut EP), I knew some experimenting was going to be necessary in order for me to grow as an artist. I had gained more experience with structuring my music production and more knowledge of how to use electronic instruments. My whole sound had gone electric through the evolution of live performance, so a large part of the record reflects that transition. But my sound was and is always going to be big because as someone who has some synaesthesia, creating production for me is like filling a frame with shapes; if a shape or a colour is missing then the song is not complete. Ultimately I give every song over to that part of my brain and my synaesthesia then tells me what to do. I paint what I see is missing around the song, just with sound instead of paint.

Can you tell us a little about the production process of your EP?

My writing is driven by pop chords, which is a very stable base for creating interesting music production. I’m always looking for things to be sonically interesting as well as accessible, which is a challenging balance to strike but I personally need it, because there’s not a lot in pop music that holds my attention right now. I mentioned before about how my synaesthesia dictates the shape of my music, which ultimately manifests as me being like “oh that synth needs to be wider, more grainy and a deeper blue”, which I know is quite abstract for most people to hear. I tend to create high-quality demos and build on them, rather than doing endless rerecords – Kate Bush did the same thing, I gather.

I’m also a big fan of what I call a “limited palette” approach; instead of browsing endless plugin packages, explore what’s available to you through your music software and how you can manipulate it using filters, EQ, reverb, etc. It forces you to communicate the core of what you really want first and then finesse it later. I developed both ‘Liminal’ and ‘New Lovers’ in this way – it really allowed me to get the arrangements nailed at quite a tear! But I think it’s important to be honest about the fact that all of the core synths and beats on the record started as patches provided by Logic or Garageband, because I’ve heard people talk a lot of shit about these softwares and it’s just snobbishness – these tools are a gateway to creativity. Lots of the string parts you hear on ‘Constellations’ were recorded on Garageband for iOS, and they sounded great so we just kept them. We changed up a few sections through Pro Tools, but the arrangements and progressions worked well.

Is there a meaning behind Liminal as an EP title?

Of course. I can’t make things without purpose, it’s not how I roll. I ran into the word ‘liminal’ during my degree (theology, not music by the way), meaning a space between two states – on a threshold, as it were. It’s a place of potential and possibility, but not always one of security. I thought it was a great metaphor for describing those ‘in-between’ moments in romantic interactions where you are not in one space or another – you’re not single and you’re not in a relationship. What is that space? You might be starting something, you might be unsure, hopeful, in conflict, in regret, misreading each other, seeing someone casually, in denial, the list goes on. Human interactions are often messy and erratic and you don’t always know where you stand. So I started writing about those interactions. I wrote a song about regret (‘Salvage’) during a relationship breakdown, I wrote about the trepidation of sleeping with someone for the first time (‘New Lovers’), I wrote about figuring out a bit late that you like the person you’re sleeping with (‘Liminal’) and about the warm realisation that you’ve met someone you could fall in love with (‘Constellations’).

I think it’s really important for LGBT+ artists/musicians/engineers/producers to be seen in the music industry. Who are your LGBT+ musical inspirations?

Honestly, in the past it’s been a struggle to find inspiration from LGBTQ+ figures in this industry. All the ‘out’ queer female-identifying producers and engineers I know of are my peer age or younger – which in many ways is terrific, but in others makes me sad because there’s very little guidance to navigate the landscape. In this way I am endeavouring to literally be the change I want to see. In terms of queer artists, in the past, I’ve loved Freddie Mercury, David Bowie, the aforementioned Kd Lang… because they were striking and different and fearlessly, undoubtedly talented. These days it’s easier to find visible queer artists to admire – I find Perfume Genius, Princess Nokia, Lady Gaga and Christine & The Queens particularly excellent, in how they all in their own way seek to push the boundaries of their art. In terms of writers, Kate Tempest has been a particular inspiration in the past couple of years – I read Running Upon The Wires when I was finishing the mixes for Liminal and her visceral style really hit me between the eyes. Oscar Wilde has always informed an element of my writing – he has a capricious flair and a deep romance to his descriptions that I aspire to lyrically.

You’re touring along with the release of your EP, can you talk us through how you go about performing your tracks live?

I use a mix of tech and live instrumentation. I insist on there being a live performance element to what I do because I know for a fact that young women need to see what’s possible for them that’s different to typical pop presentations of female-identifying performers. They need to see women rock their gear live because women are not just decoration for men’s talents, but that horrendous perception is still pervasive even now.

So, onstage at the moment, I have a Boss RC-2 Loop Pedal, an Ableton/ Novation Launchpad, my ROLI Lightpad Block, my iPad, my Fender Telecaster (plus my Harmonix Holy Grail pedal), and – occasionally – my Kala Tenor electro-acoustic ukulele. These pieces of gear vary depending on the set, but the basic rule of thumb is the bigger the song arrangement, the more gear! ‘The Game & The River’ from the last EP is a good example – with the looper, the Launchpad, the iPad and my voice. One of the joys of being an artist-producer is being able to map your stems and take them straight from the studio to the stage, so I revel in that. I get all the plates spinning, rev up my vocal power, place it in the middle of the spinning plates and let it ride. The thrill never wears off.

Source: ‘My synaesthesia dictates the shape of my music’: Katie Tavini catches up with Rookes about her latest EP Liminal – PSNEurope

There’s something in music that fascinates me – how it communicates emotion so immediately. That’s something I wanted in my paintings.