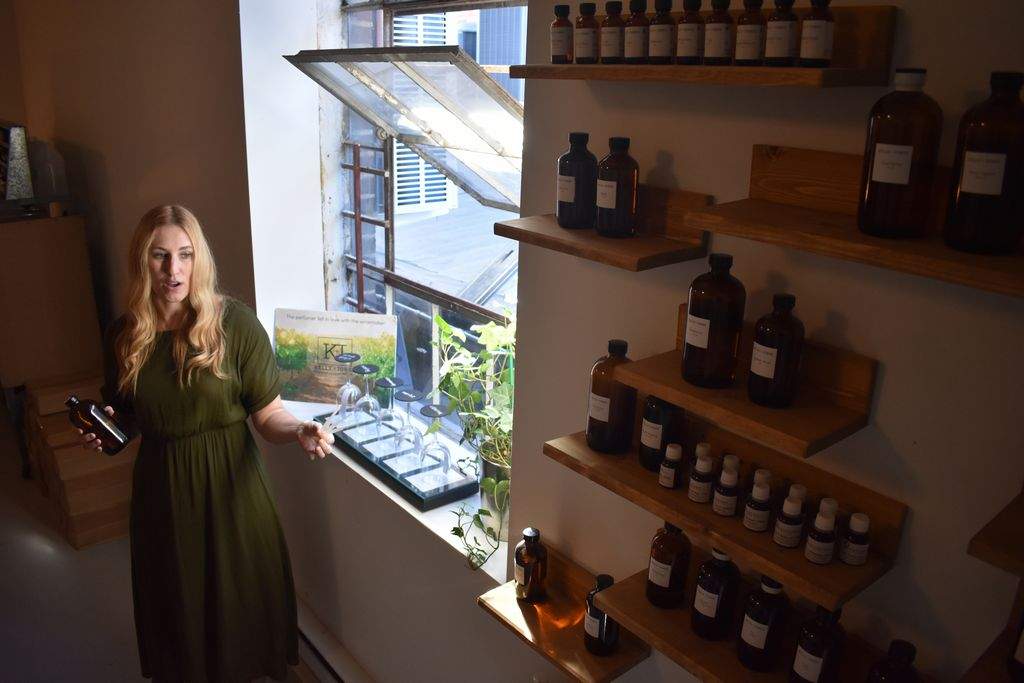 Kelly Jones thought she had everything she wanted till she saw that cherry blossom fluttering outside the Tokyo board room at Toyota’s headquarters.

An unabashed gearhead, the Michigan native and daughter of a General Motors engineer had scored her dream job planning the features of a major auto brand’s vehicles.

But in that moment, toward the end of her run with the company from 1999 to 2005, she imagined the smell of cherry blossoms and started sketching a place she could make and sell fragrances.

Little did she know it, but those sketches put Jones on a path to open Kelly + Jones, a new Kingston fragrance business best known for wine-themed perfumes that have attracted national media attention and steadily driven sales.

Jones, 45, recently moved her eight-year-old perfume company to Ferrovia Studios, at 17 Railroad Ave., Suite 209, in Kingston. She left New York City for the mid-Hudson because she’d done business in the area, and she appreciates its natural beauty and affordability.

Now, she’s planning a grand opening event, likely next month, for her boutique fragrance house’s new Kingston scent studio, where patrons can mix and match their own scents, and she’s looking to hire two employees.

Kelly + Jones wine- and mezcal-themed fragrances are among the best sellers at the store, which changes its stock of housewares, gifts, jewelry, fragrances and other goods, every 10 weeks.

“A lot of times fragrances can be really overbearing, and they wear the wearer instead of the opposite,” said Meyers. “Her fragrances are really well done, they have a nice palate to them, they’re very clean, there’s not a lot going on with them, and they gel well with people’s chemistry. She’s a very talented perfumer.”

From local boutiques to lifestyle stores, Jones now has 50 wholesale accounts coast to coast, a website she says does steady sales, and wedding planners, individuals and businesses commissioning her to make custom scents.

Yet, wine perfumes aren’t her only big sellers. Patrons can smell like the woods, with Catskill-themed scents — fitting given that Jones traipsed into the woods as a child to pick plants to mash for scents.

But well before Jones could create her wine and other natural fragrances, before she could design custom scents for companies, events and individuals — even for Justin Timberlake’s last album — she had to learn about perfume.

She originally graduated business school, but her MBA was in international business, and all her experience was in the automotive sector.

It was one thing for her to quit her posh Toyota gig in 2005 to work in marketing for a pair of major fragrance houses. It was quite another thing for her to step away from a steady corporate paycheck altogether to run the Salude Spa Bar in Tucson in 2008.

Two years later, following a fateful chiding at a California vineyard, Jones transformed her Tucson business into Kelly + Jones, and moved to the New York City area for the bright lights, business opportunities and excitement.

“It’s pretty brilliant because she hits all the wine notes — oak, floral, citrus, Earth — with her scents,” said jeweler Morgan Mikula, owner of Facets of Earth in Kingston, who’s commissioned Jones to make a scent to capture her brand’s essence.

The idea for Jones’ wine perfumes began with one awkward moment around eight years ago at a California vineyard. There, a winemaker called out Jones for wearing perfume that might interfere with others smelling the wine.

Jones saw the scolding as a business opportunity. What if a perfume could be paired with a similar wine to help people pick up and better enjoy a wine’s notes rather than distracting from the olfactory experience?

She set to work making scents based on Merlot, Chardonnay, Rosé, Pinot Grigio and Riesling. After a decade of product and brand honing, and squashing skepticism among sommeliers, restaurateurs, wine critics and the owners of liquor stores and vineyards, her efforts are bearing fruit.

“It seems kind of gimmicky at first until you talk with Kelly, and then you realize she’s no joke, and she really knows her scents,” said Robert Provenz, owner of Ester Wine & Spirits in Kingston, who recently hosted a wine pairing and scent event with Jones.

“Her perfumes only have two or three ingredients, which is wonderful because she’s doing a really good job at making her products reflect the trend of people being conscious about what they’re putting in their bodies,” Provenz added.

After years of such events, Jones is glad customers finally understand her fragrances smell like a wine’s notes, not the alcohol, and the fragrances can enhance a tasting, not hurt it, by cluing them into what’s in a wine.

“When I first launched, people (in the wine industry) hated me, and I had this wine blogger rip me apart,” Jones said. Now, “People realize they can have really beautiful multisensorial experiences with my scents.”