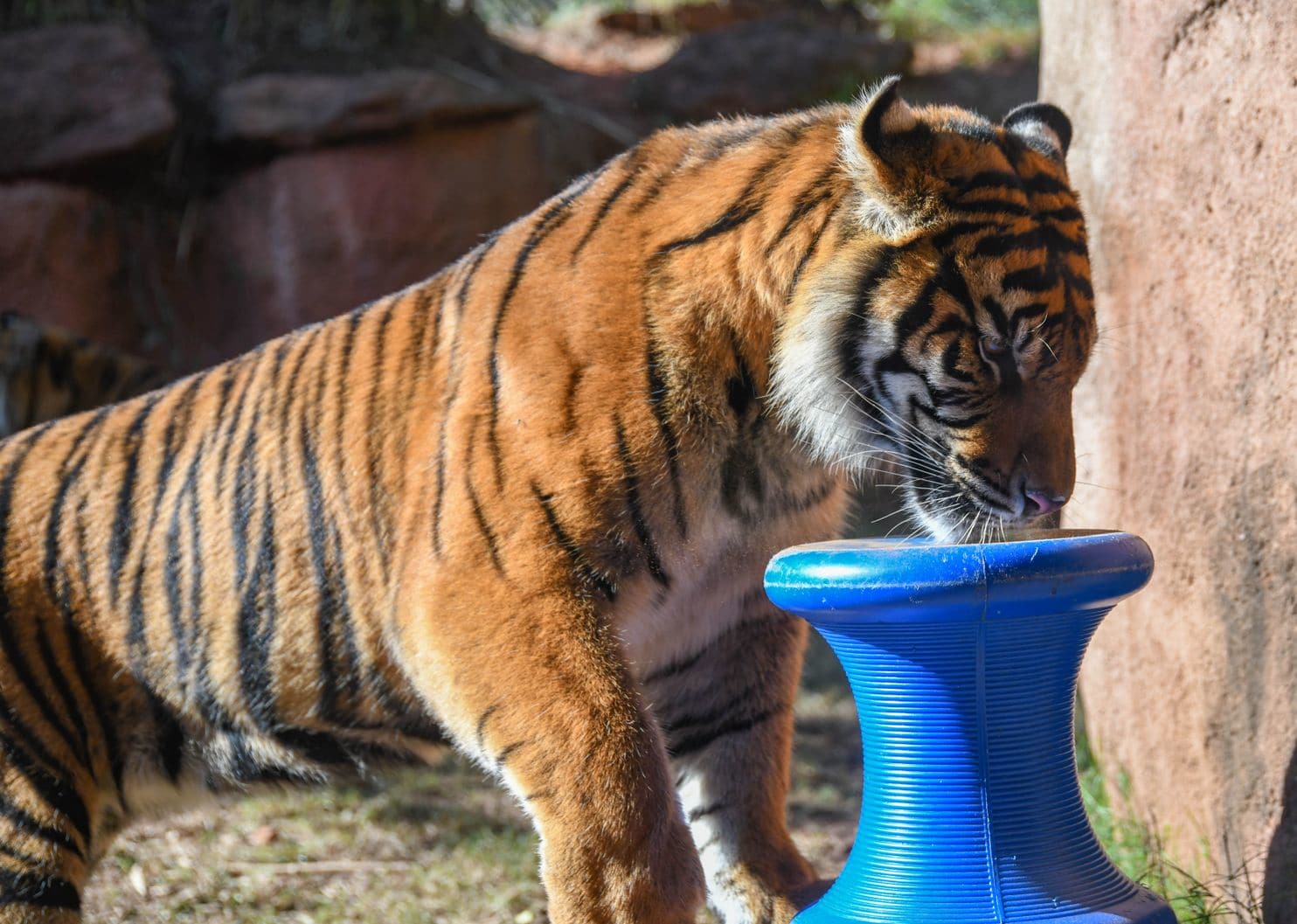 From September — make that late August — through the end of the calendar year, or for as long as supplies last, no American is far from the seasonal scent of pumpkin spice.

Not even American zoo animals.

The powder is sprinkled in lion enclosures at Smithsonian’s National Zoo. It is dotted in the exhibit that’s home to Fred, an American elk at the Oklahoma City Zoo. It is dusted about the living space of bears and foxes at the Cincinnati Zoo. And these animals love it, keepers say.

But few furry creatures embrace the pumpkin spice lifestyle as enthusiastically as Bei Bei, the National Zoo’s young panda, who was introduced to the autumnal additive last year and immediately doused his head with it. His caretakers sometimes use pumpkin spice to lace a rotted log, creating a combination that Bei Bei finds bewitching.

“With pandas, if they really like a smell, they try to rub it all over their body,” said Laurie Thompson, assistant curator of giant pandas at the National Zoo. “Bei Bei liked it.”

Pumpkin spice, which is usually sold in powdered form as pumpkin pie spice, is not the only spice to anoint zoo enclosures. It is one of about 30 to 40 scents used in the National Zoo’s great cats exhibit, for example. All are used for what’s known in zoo lingo as “scent enrichment” — the practice of exposing animals, many of which rely on their sensitive noses to gather information, to smells that encourage natural behaviors, keep them interested in their surroundings or get them moving.

This is done not only with spices but also with oils, herbs and, not infrequently, feces and urine. Sometimes zookeepers deploy the scents of animals’ predators or prey, because being alert to an attack or stalking dinner are things they’d do in the wild. Caretakers might sprinkle odoriferous items on rocks, spritz them on trees or create a trail with them that leads to food.

But pumpkin spice — along with its component flavors, such as cinnamon, nutmeg and cloves — is a favorite of many zoo residents, particularly felines, which depend on scent for hunting and mating. The Oklahoma City Zoo tigers and lions that encounter it often respond by “scent marking” — rubbing their chins or urinating nearby, the same sort of action they might display when “leaving messages” for a potential mate in the wild, said Kim Leser, the zoo’s curator of behavioral husbandry and welfare.

That doesn’t necessarily mean pumpkin spice would lead a male tiger to believe he’s going to happen upon an eligible female, she said; even in the wild, mating is hit or miss. But it would present him with the opportunity to act out his amorous instincts.

“It’s just excitement . . . chuffing and clawing,” she said. “It does replicate the behavior we want to encourage.”

The panda propensity for immersion in a preferred odor is called “scent anointing,” Thompson said, and Bei Bei’s mother, Mei Xiang, also does this with pumpkin spice. Fred, the Oklahoma City elk, reacts to the fall scent in a similar way.

“He loves rubbing on things,” Leser said. “The smellier, the better. So for him, anything that we might go into an elevator and say, ‘Ooh, that’s too much,’ he likes those.”

All this means that if you hugged Bei Bei or Mei Xiang these days, they might smell like Starbucks on a crisp autumn morn. If you took a whiff of Fred’s furry neck, you might feel transported to the orange section of the Yankee Candle shop. But zoo animals are individuals, caretakers stress: While Bei Bei’s father, Tian Tian, recently showed interest in nutmeg, he could take or leave the more complex aroma of pumpkin spice, Thompson said. 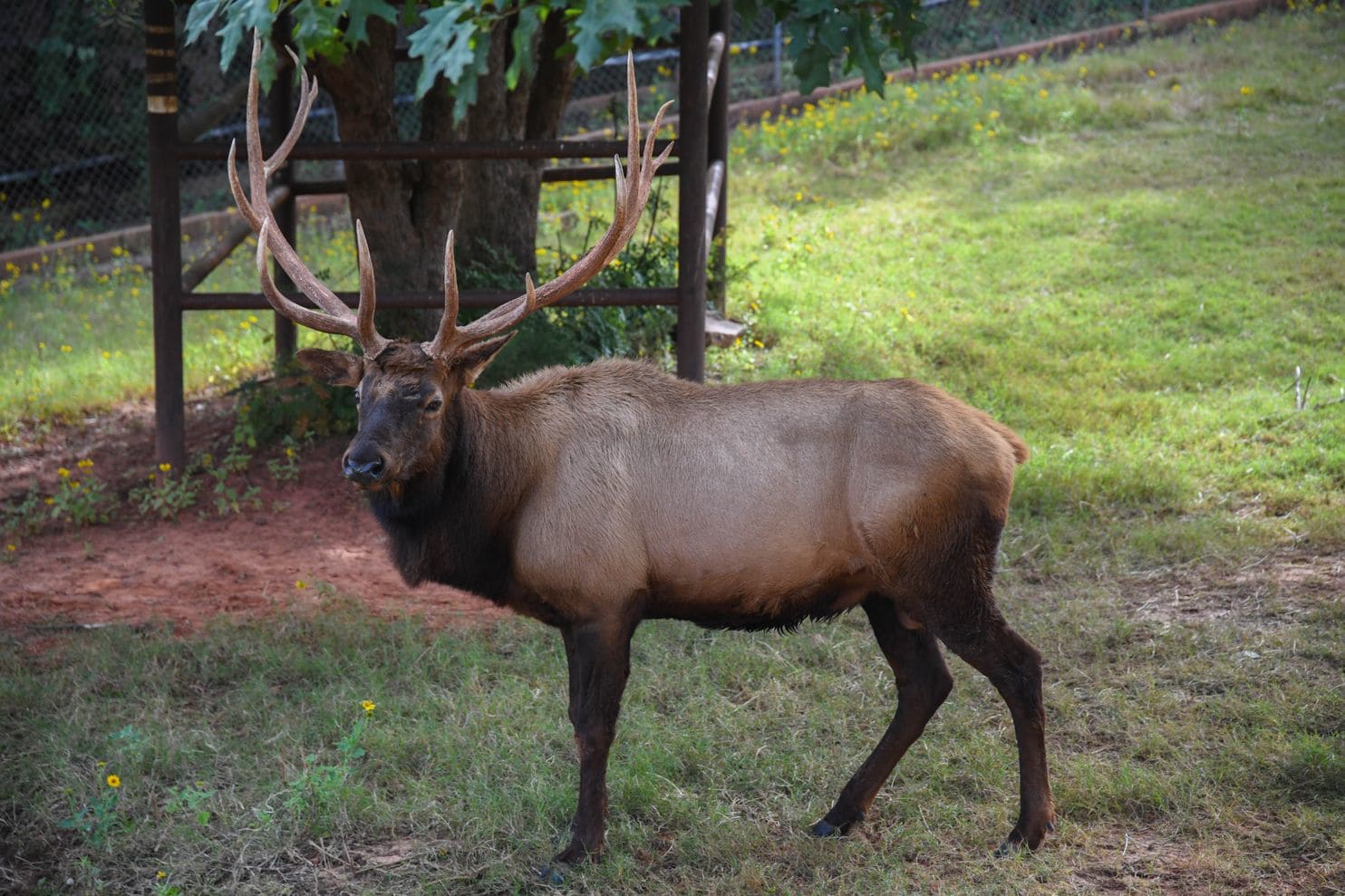 Just like us, many zoo animals are exposed to pumpkin spice on a purely seasonal basis. “Being the season that it is, pumpkin spice is easy to obtain,” said Mike Dulaney, curator of mammals at the Cincinnati Zoo, where polar and spectacled bears and gray and arctic foxes are spice devotees, and where ocelots adore pumpkin extract.

Those animals who’ve basked in the spice before might get more interested because it reminds them of previous Octobers, Dulaney said. “It’s like: ‘Ooh, pumpkin spice! I remember this! But I can’t remember what I found,’” when exploring it.

“It doesn’t take a lot of a spice or an odor to be sprinkled around the exhibit to get them to move around a little more,” Dulaney added. 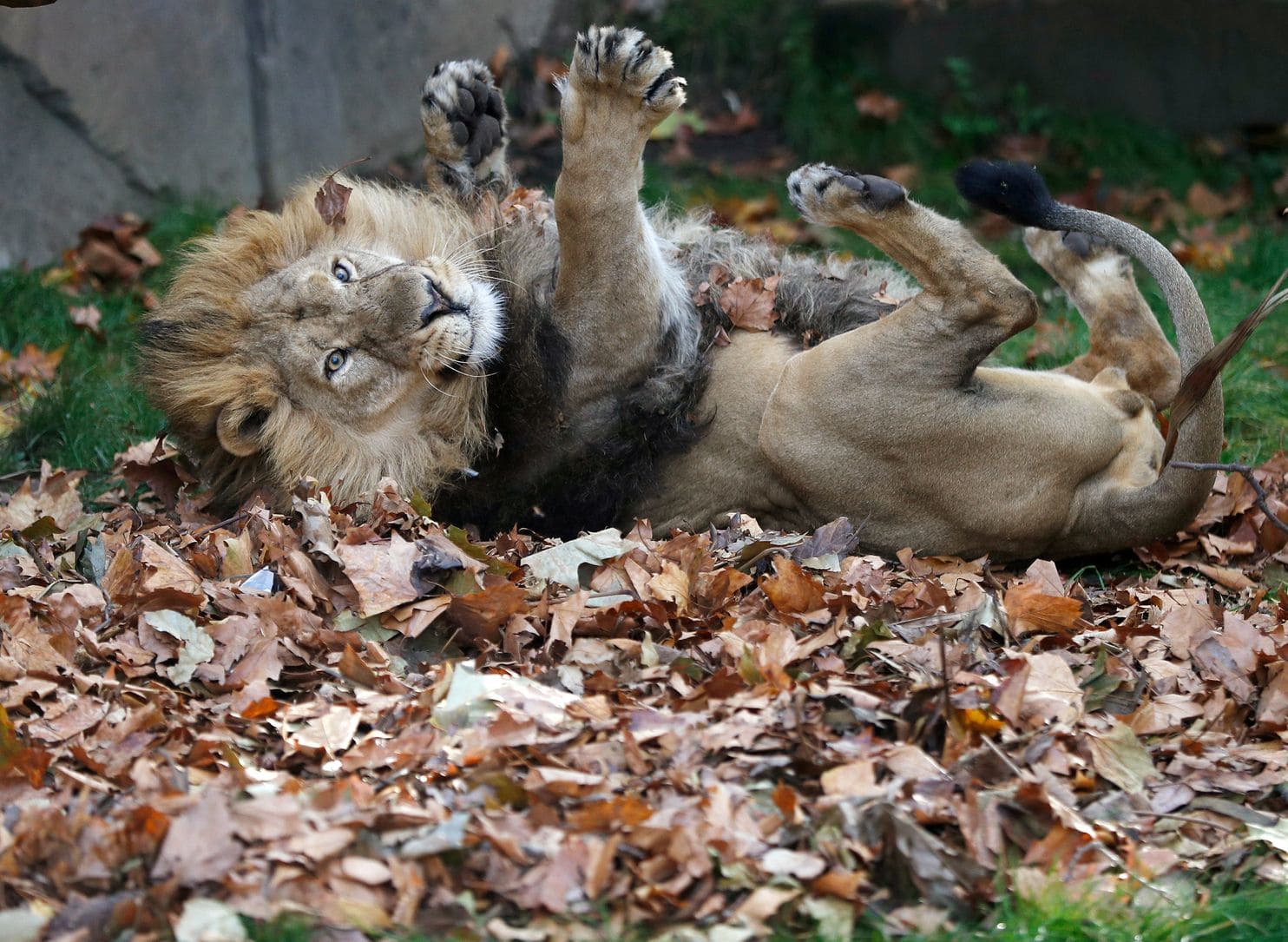 American zoo animals are not the only ones to get the pumpkin spice treatment. Bhanu, an Asiatic lion at the London Zoo, rolls in leaves scented with what the zoo called “a special blend of warming spices” — cardamon, cinnamon and clove. (Peter Nicholls/Reuters)

At the National Zoo, big cat keepers have been using pumpkin spice for years, said keeper Katy Juliano. “I think Starbucks copied us,” she joked.

“That used to be our number one, and for a long time, the only spice we used here, because it’s so popular with the lions and tigers,” Juliano said. “Something about the nutmeg and cinnamon combination is really, really exciting for them.”

When it’s sprinkled on the ground, the cats flop around in it. They’ll lick it and “make that crazy face,” Juliano said, referring to the lip-curling that happens when a cat or other animal sucks a scent up to its vomeronasal organ for in-depth analysis. They’ll sleep on pumpkin spice-scented hay. Luke, an older lion, finds pumpkin spice especially nice. Juliano said he gets it all up in his mane, kind of like dry shampoo with a hint of Thanksgiving.

The great cats keepers stop short of seasoning the cats’ diet of ground beef, carcasses and bones with the flavoring, she said. But unlike Starbucks, they do not deprive their followers of the cozy aroma come spring.

“We use it all the time,” Juliano said. “They’d probably be sad if we only used it in the fall. They would miss it.”