Playing with fire: Musicians use ‘organ’ that shoots out scented flame 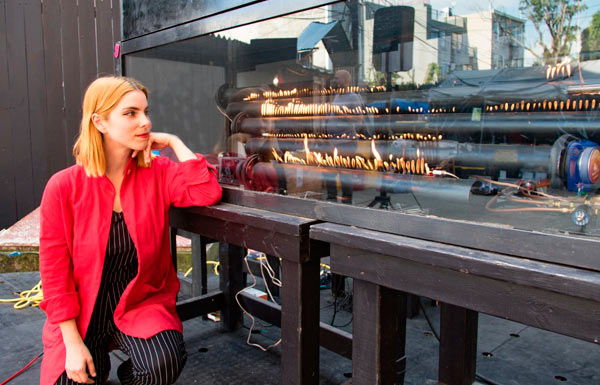 The flame organ consists of five black steel tubes, dotted with holes from which spring propane-fueled flames. A speaker at the end of each causes the flames to dance as it resonates. Called a Rubens’ tube, the devices are common in physics classrooms, said Koski, where they demonstrate frequencies — with the right tone, the flames will flare up into a sine wave. The tubes are usually solo, but Guerilla Science saw great possibilities in making a larger, more elaborate version of the device, she said.

“We decided to stuff five of them in a box and make this beast of an instrument,” said Koski, who lives in Fort Greene.

The group then recruited three artists to develop original compositions for the combustible device, including Bushwick singer Ziemba, who will give a performance that combines smoke, song, and scents, using the flame organ to burn fragrant woods and herbs as part of her show. The organ allows her to expand on her multi-sensory performances, she said.

“I’ve been working with fragrance, and combing fragrance and sound for the last couple of years. So this was a unique opportunity to take it to the next level, with the music directly causing the scents — our voices are igniting the items in the organ. It was a really exciting synaesthetic opportunity,” she said.

Source: Playing with fire: Musicians use ‘organ’ that shoots out flame