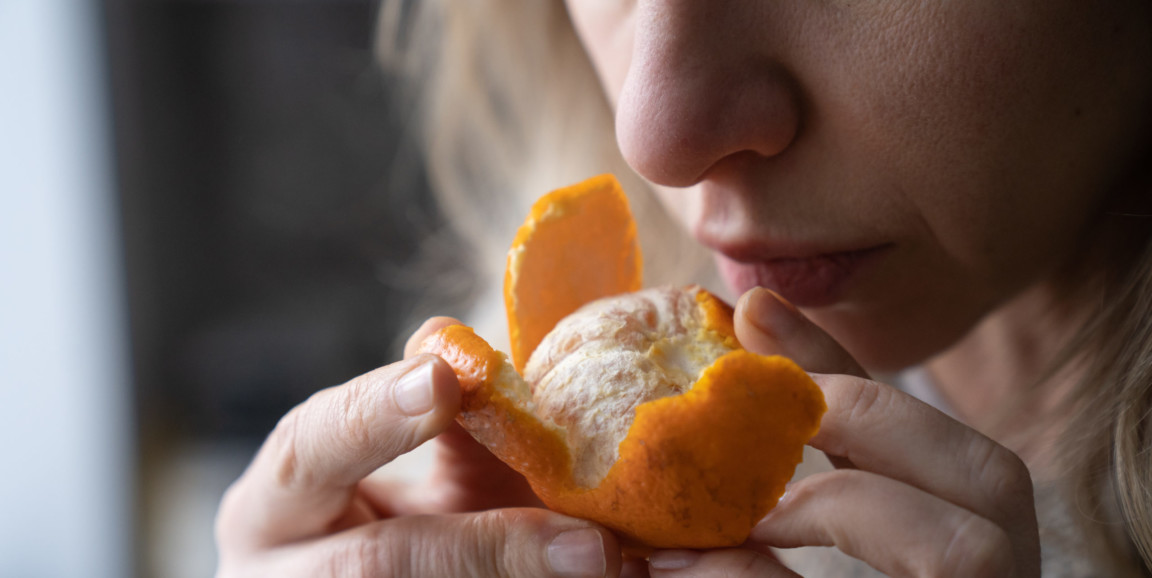 In December of 2020, I received an unexpected Christmas present: a dry, persistent cough.

Just as vaccines were rolling out, I caught COVID-19. Super.

My symptoms were fairly predictable — a cough and fatigue. I thought that would be the extent of it, but one morning, a few days into isolation, I made a cup of tea, a sweet and spicy blend with a strong scent. I lifted the mug to my nose and inhaled. Nothing.

Like a lot of people who lost their sense of smell — a condition referred to as anosmia — because of COVID-19, I spent the next 10 minutes smelling miscellaneous items from the back of my refrigerator. Could I detect chopped garlic? No. Dijon mustard? Nope. Blue cheese? Nada.

A day or two later, my ability to taste also slipped away. Soup was hot water with chunks in it; crackers nothing but crunchy cardboard. I could still ascertain rudimentary tastes: Cookies were vaguely sweet, and chips were slightly salty. But that was where it ended.

Throughout the weeks of my dulled senses I couldn’t help but wonder, “What is happening? Are my poor olfactory neurons — the cells responsible for processing smell — dying? Are they temporarily damaged? Or is this a permanent loss?”

Months later, after I had — spoiler alert — made a full recovery, including of my sense of taste and smell, Zara Patel, MD, a Stanford Medicine physician-scientist and associate professor of otolaryngology, and others published a paper that dug into the latest research on smell, including COVID-19’s effect on the sense.

Although my COVID-19 stint had become a distant memory, I still wondered about the science behind how I Iost my sense of smell, so I reached out to Patel. She helped shine a light on what was going on molecularly, how I regained my senses, and how people who have yet to recover might be able to retrain their olfactory system to smell again.

“Most people with earlier variants of COVID-19 experienced loss of smell, but there are so many different reasons why this happens; it’s not just one mechanism,” Patel said. “Unfortunately, few doctors specialize in treating, evaluating or diagnosing anosmia.”

To help arm doctors and patients with more knowledge, Patel has made her publication open to everyone, everywhere, hoping she can demystify a rather unsettling phenomenon.

The pathways to senselessness

Some research suggests that congestion and swelling of tissue in the nose are main factors that lead to anosmia. That might be the case for some, said Patel, but congestion isn’t always a symptom of COVID-19. (It wasn’t for me.)

What’s more likely, she said, is that SARS-CoV-2 injures sustentacular supporting cells, which are like helper cells for the main neurons that pick up on chemicals in the air and send signals to the brain. They help maintain a healthy ecosystem in which the neurons can thrive, and they help guide the neurons to grow and make the right connections.

SARS-CoV-2 latches onto specific receptors to infect a cell, but olfactory neurons don’t have that receptor. The support cells, however, do. “Our body’s natural immune response is to bring inflammatory molecules to that site to try to kill the invader,” Patel said.

But that response can overwhelm the structural integrity of the support cells, and they end up as collateral damage. Without the proper support, olfactory neurons can’t successfully relay chemical signals to the brain, effectively silencing smell.

What about loss of taste? Is that the same mechanism? Yes, and … maybe not.

“Sweet, salty, bitter, umami and sour are the tastes that actually come from your tongue,” Patel said. “Anything else that adds to the flavor of your food, like distinguishing vanilla from chocolate or raspberry, is completely dependent on your ability to smell it.”

Some preliminary data suggests that COVID-19 might directly attack the nerves in the tongue, said Patel, but for the majority of people who have loss of taste, it’s more likely because of problems with smell.

Some even hypothesize smell loss is a benevolent sacrifice made to protect something even more critical: the central nervous system. Early studies in animals suggest that the damage seen in the olfactory pathway creates a roadblock for the virus, eliminating a conduit for infection of the brain and broader nervous system.

The theory has yet to be demonstrated in humans, but it’s an interesting concept, Patel said.

I vividly remember the day, about five days after the initial anosmia, that I started recovering my sense of smell. Seeking an indication of recovery, I held a partially peeled tangerine to my nose and unexpectedly caught an inkling of something sweet and zesty. Thrilled, I yanked the peel back further, pressed it closer to my nose and sniffed. Though faint, it was really there — tangy citrus.

(Later that year, I recalled it as one of the best moments of 2021 — and I got engaged that summer.)

My return to smellhood stretched over 15-20 days. Seven days after the tangerine, I felt mostly recovered, but it was another week before the recovery was complete.

“Within the first month, about 70% to 75% of people who have COVID-19-related smell loss recover,” Patel said. That leaves 25% to 30% who do not and are struggling to find answers.

Patel also told me something rather unnerving: COVID-19-induced smell loss is not always a one-time thing. You can lose your sense of smell, recover it, then lose it again — and you don’t need to have multiple COVID-19 infections.

And it’s not always just a loss of smell the second time around; sometimes it’s a distortion of smell and taste.

In these bizarre cases, something normal, like a flower or a simmering stew, can assume the scent of something heinous — think rotting meat, chemicals or other repulsive things. The distortion is a result of damaged support cells.

Olfactory neurons naturally regenerate, but when they do so among glitchy support cells, the neurons don’t receive the nutrients and structural help necessary to grow into healthy cells. Unable to properly sense odor particles, the neurons send signals that are unrecognizable to the brain.

Olfactory neurons can only do their job after the virus is finally cleared and the supporting cells recover.

Patel has hope for patients whose symptoms linger — and for their doctors who may not know what do. In her paper, she’s published an algorithm that collects information about symptoms, duration of illness and other COVID-19-related details, then spits out guidance for doctors and patients as they navigate care and treatment options, such as olfactory training — in other words, smell rehab.

“It’s a structured smelling protocol, which sounds simple, but if you think about it, it’s really similar to what one might do if they have a stroke — they’d go to rehab,” Patel said. Patients might sniff different concoctions of essential oils or herbal scents in a specific order multiple times a day as part of their training.

“You’re just exercising your sense of smell over and over for about six months.” Over that time, olfactory nerves regenerate and the support cells can slowly recover, enabling the odor-sensing neurons to process chemicals and transmit smell signals correctly.

Smell rehab isn’t just for people who’ve lost their smell — it’s for anyone whose ability to smell has been warped by the virus.

Moreover, Patel hopes that patients who have lost their sense of smell and are feeling distraught can benefit from the paper: “I really want both patients and doctors to have access to this and use it as a source for information and treatment guidance.”