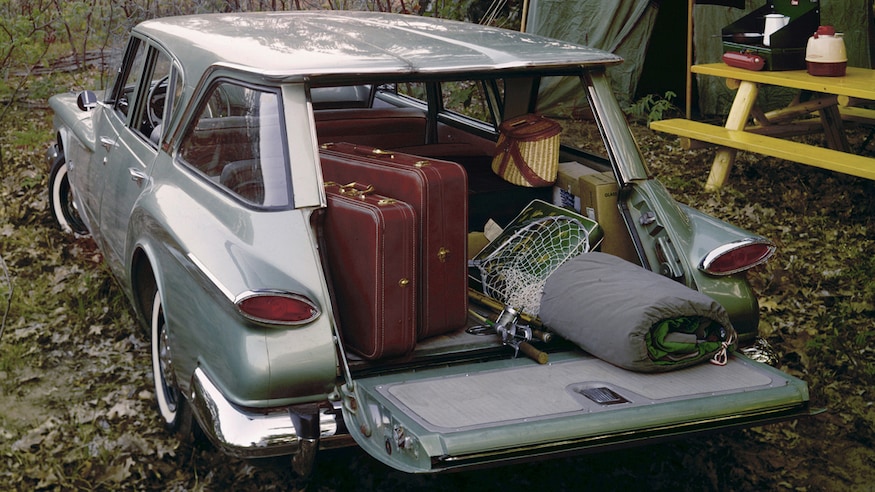 We know better now, of course, but off-gassing is still very much a thing in new cars. With all the synthetic material in vehicle interiors, modern cars continue to let loose a sustained barrage of lightly-tethered petrochemical fume matter—what we used to call new-car smell—for occupants to breathe deep in the months after a new machine is first pressed into service. Then, one day, the new car smell is gone. Where to, we’ll never know, but we have a pretty good idea it isn’t all good news.

Through the years I’ve felt kind of bad about this, transporting my family in a procession of brand-new press cars, each at peak off-gas. But I forgive myself. I’m a man of my times and not to excuse the unhealthful reality of it all, but what can I do? On the bright side, I think of how car-testing employment allows me to serve up not just a few but a veritable variety pack of carcinogens to my loved ones, a potpourri that could in its chemical diversity be toughening us all up. And, too, I remember my own childhood, when the health challenges of riding in our one and only family car were different but certainly no better.

The events burned most indelibly in memory take place in the back of my parents’ 1960 Valiant Suburban station wagon, which they bought when I was two and kept for six years. It was relatively light on synthetics, with lots of painted metal, but didn’t compare for organic construction to the MGA they owned previously, wooden floorboards included, or the leather-lined MG Magnette ZB sedan that followed it, staying with us too briefly, only to be replaced by the Valiant, a standalone brand in 1960.

Most of my days included serious backseat time in the Valiant with my mother momming the helm. The times I remember best, however, are the early mornings and weekend days of winter, when my father took the traditional patriarchal place behind the wheel. We’d all pile in and events would proceed more or less according to pattern: sister Suzy and I climb in the back, where we are treated to the sweet and not unappealing fumes of leaded gasoline, emanating from the Valiant’s filler/gas tank and a fuel-delivery system porous by design. Settling in the front bench, Dad engages the choke and fires the all-new slant six-cylinder engine, troubled by zero emissions controls, to life. The windows are rolled up because it is freezing outside and we can see ourselves breathe. The rich exhaust of the roaring engine enters the poorly sealed cabin for us to see and breathe, too, as we wait up to five minutes to set out.

For by then things will have gotten really real as Dad reaches for the briar pipe in the pocket of his overcoat. While the slant-six roars and the windscreen and windows fog, he carefully scrapes out the bowl with a special pipe-cleaning tool, on occasion extracting a fuzzy wire pipe cleaner from his pocket for deployment in what seems to be the perpetual exercise of de-crudding its stem. If we are really lucky, we kids might get a wire pipe cleaner of our own, to creatively sculpt, fight over or use as a weapon against the other, most times failing to draw blood. But then Dad would administer the coup de grace.

Pulling out his pouch of Revelation pipe tobacco, he methodically proceeded to fill and tamp down with the other end of the same tool a bowlful of his preferred Philip Morris blend. Then a box of wooden matches came out with which to light the contents. “It’s Mild and Mellow,” the Revelation ads read, and Dad, who kept smoking the stuff, seemed to think so, but in my view mellow it was not. In fact, to this day, I measure nausea in units of what I experienced during childhood, on a cold morning, in the backseat of a Valiant, with the deadly triumvirate of gasoline, exhaust, and pipe tobacco turning us kids contrasting shades of green.
And that’s ignoring the fact that the car had no seatbelts.

When the Valiant started burning oil toward the end of its stay with our family, a new dimension was added to its olfactory assault. Happily, the Volvo 122S wagon that followed didn’t smell quite as bad, though it could put up a fight. Meanwhile, my dad kept smoking his pipe for another 20 years before quitting almost 35 years ago. But, for the record, I was always against it. They tell me my grandmother asked me at my third birthday party when I was going to stop drinking from a bottle. I told her, pointing to my father, “when he stops smoking a pipe.” It’s psychological insight like that—and perhaps some exhaust fumes—that have made me the stable genius I am.

Source: Memories of Automotive Smells—Only Some of Which Were the Car | Automobile – Automobile

Music has always been a matter of Energy to me, a question of Fuel. Sentimental people call it Inspiration, but what they really mean is Fuel. I have always needed Fuel. I am a serious consumer. On some nights I still believe that a car with the gas needle on empty can run about fifty more miles if you have the right music very loud on the radio.”